Thaliyil RajanBabu is a professor in the Department of Chemistry and Biochemistry, where he teaches and does research in organic chemistry. He leads a group of graduate and undergraduate students, and postdoctoral fellows, who are engaged in research aimed at discovering efficient, selective and environmentally benign processes for the synthesis of pharmaceuticals and other similar value-added materials from readily available feedstocks and natural sources.

Among the most notable of his scientific contributions are invention of group transfer polymerization, new ways of generating and using functionalized radicals for organic synthesis, and, several enabling discoveries in homogeneous catalysis that convert ethylene, acrylates, styrenes and dienes into value-added organic intermediates.

RajanBabu is the author of more than 150 peer-reviewed publications and book chapters and has delivered more than 100 invited or named lectures at international meetings, universities and research centers. He has served on several advisory committees of the American Chemical Society, the National Institutes of Health and the National Science Foundation. RajanBabu has also held visiting professorships at Tokyo Institute of Technology, Indian Institute of Technology (IIT, Bombay) and Indian Institute of Science Education and Research (IISER), and, was elected distinguished alumnus of his alma mater, IIT (Madras), in 2008.

RajanBabu received his undergraduate degrees from Kerala University (CMS College, Kottayam) before joining IIT Madras for an MS program. After obtaining a PhD degree in chemistry from Ohio State, he spent two years as a postdoctoral researcher at Harvard University before joining Dupont Central Research. He returned to Ohio State as a professor in 1995 and has held the Kimberly Chair in Chemistry and Biochemistry. 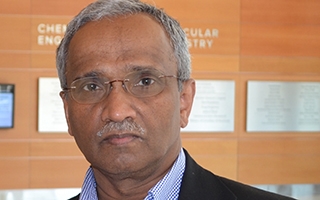