Geoffrey Parker, the Andreas Dorpalen Professor of History and Distinguished University Professor, is no stranger in the arena of the world’s top awards and honors, among them the Royal Netherlands Academy of Arts and Sciences’ Dr. A.H. Heineken Prize for History in 2012 — his discipline’s Nobel Prize.

Parker’s latest honor, his election as Corresponding Fellow of the Royal Society of Edinburgh (RSE), has special resonance for him. “It was a particular pleasure and honor to learn that the Royal Society of Edinburgh has decided to elect me a Corresponding Fellow this year,” he said, “because I shall return to St Andrews this spring as a Carnegie Centennial Professor (one of three appointed for 2016).”

“The Carnegie Trust has strong links with Ohio State, as well as with St Andrews: Some years ago it selected several departments at Ohio State to take part in the ‘Carnegie Initiative on the Doctorate’ — an effort to identify and standardize 'best practices' in postgraduate education. I was proud to take part in that process as a representative of the Department of History.”

“Also, I spent 14 years teaching at St Andrews, 1972-86, and since then I have returned several times to lecture — both there and at other Scottish universities.”

Created in 1783 by Royal Charter for “the advancement of learning and useful knowledge,” the Royal Society of Edinburgh is Scotland’s National Academy of Science and Letters. New Fellows, elected to the RSE through a rigorous five-stage nomination process, include the full spectrum of disciplines, giving it a multidisciplinary perspective making it unique among national academies.

Parker is in exceptional company. Past Society presidents include Sir Walter Scott, Lord Kelvin and Sir Michael Atiyah, and each year’s list of new inductees is both international and impressive — one of them fellow Ohio State's only other RSE Fellow, Distinguished University Professor and Professor of Chemistry James Cowan (2014). 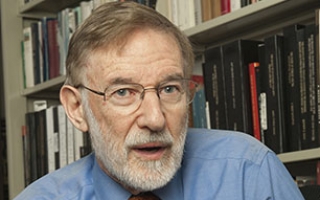