Christopher Hirata, professor in the Department of Physics and the Department of Astronomy, has received the Distinguished Scholar Award, awarded each year to six Ohio State faculty members who demonstrate scholarly activity, research or other creative works representing exceptional achievements in their respective fields.

Hirata is widely known for his theoretical breakthroughs in cosmology, high-precision cosmological measurements and intensive technical studies of space telescopes and detectors. He is a leading theory-to-pixels expert on weak gravitational lensing, which uses subtle distortions of galaxy shapes to measure dark matter clustering and probe the physics of the universe. His accurate, meticulous calculations of the cosmic recombination epoch — approximately 30,000 years after the Big Bang — furthered scientific understanding of key moments in the universe’s infancy. Hirata also plays a pivotal role in the scientific and technical design of the upcoming Nancy Grace Roman Space Telescope, which is set to launch in 2025.

“My admiration for Hirata has no bounds. He is an absolutely remarkable talent, someone with a brilliance I have never seen in any other theoretical astrophysicist,” wrote one of Hirata’s colleagues. “In my mind, it is clear: There is nobody else of Hirata’s generation (or those before or after) who has done as much to advance our efforts to understand, through physical cosmology, the nature of dark energy and inflation. He is a brilliant scientist and a singular figure in cosmology.”

Said a former student, “I often feel lucky that I have had an advisor that is so successful both in doing research himself and in teaching others how to do research. His enthusiasm, curiosity, and confidence in facing new problems are infectious and are still having a large impact on me.”

Distinguished Scholar Award recipients receive a $20,000 research grant and a $3,000 honorarium to pursue their scholarly activity. 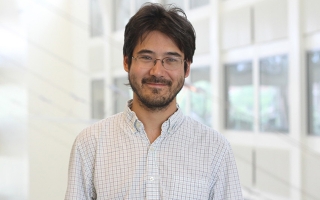