Chronicles of an American Inventor, with Reuben Klamer 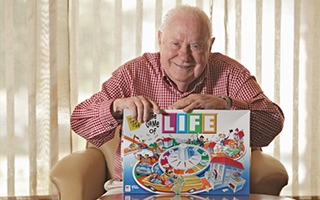 The story of a small town guy with big ideas who rose to set new standards for the toy industry. Reuben Klamer was born in 1922, in the middle of the depression, to Romanian immigrants in Canton, Ohio. He received an Ohio Citizen of Honor Award.  He received a Lifetime Achievement Award in 2009 from TAGIE (Toy and Game Inventor Expo).

He studied Ancient and Modern History at George Washington University, in Washington D.C. He also studied Engineering at the University of Michigan.

Later he graduated from the U.S. Navy Midshipman School at Northwestern University. He distinguished himself in combat as an officer in the U.S. Navy amphibious landing forces in the South Pacific during World War II.

In a brief hiatus in the 1970’s, he developed and taught a course in Creative Technology for the University of Hawaii at Klamer’s Creative Development Center in Kona.

What is most remarkable in his career of six decades, is that he invented more than 200 products, some of them emblematic, patrimonial such as the classic FisherPrice Preschool Trainer Skates (1984) and The Game of Life, his signature game that celebrated its 50th anniversary in 2010 and is part of the permanent collection of the Smithsonian Institution in Washington, D.C.

It was not a surprise that in 2003, Mr. Klamer was recognized as a Citizen of Honor in his native state of Ohio, after being inducted into the Toy Industry Hall of Fame in 2000. Hasbro/Milton Bradley, Mattel/Fisher-Price, Tupperware, Coca-Cola and Sears & Roebuck & Co. are among Mr. Klamer’s many current and former partners and licensees. Although his most successful creations have been toys and games, he also holds design, development and invention credits in industries as diverse as textiles, plastics, aviation, publishing, music and film: as no-glue, snap-together hobby kits and product placement in movie and other media. One of his most significant contributions is his worldwide introduction of polyethylene, an unbreakable plastic, for use in manufacturing toys such as Hula Hoops. In 2005, Mr. Klamer was inducted into the Toy Industry Hall of Fame.