Home / News & Events / Events / Do YOU accept it? A conversation with visual artist Moises Patricio

Do YOU accept it? A conversation with visual artist Moises Patricio 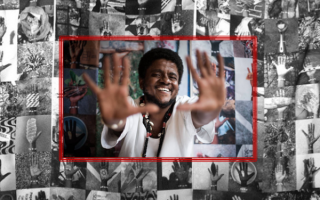 On Friday, Feb. 26, Moisés Patrício will present his lecture, "Do YOU Accept It?". This lecture is the sixth installment of the Afro-Brazilian Arts and Activism Lecture Series by CLAS. The event is FREE and open to the public.

Visual artist and art educator, Moisés Patrício, was born in 1984 in São Paulo, where he lives and works. With a degree from the School of Communications and Arts of the University of São Paulo (ECA-USP), he uses photography, video, performance, and installations in works that deal with the sacred elements of Amerindian and Afro-Brazilian culture.

A significant feature of his work is his allusion to Candomblé, for whom the sacred passes through the body and its manual possibilities. Exhibitions he has participated in include: Dakar Biennial at the Museum of African Arts (Senegal, 2016), "A Nova Mão Afro Brasileira" Museu Afro Brasil (São Paulo, 2014), and "Papel de Seda" at the Pretos Novos Institute for Research and Memory (Rio de Janeiro, 2014). In the exhibition "Negros Indícios" (São Paulo, 2017), Patrício presented his performance Padê de Exu libertador (2017) from the poem of the same name by Abdias Nascimento (1914-2011). At the Tomie Ohtake Institute, he took part in "OSSO Exposição-apelo ao amplo direito de defesa de Rafael Braga" (São Paulo, 2017). In 2020, Patrício inaugurated the Diáspora Galeria of Casa PretaHub (São Paulo) with the exhibit ´É Preciso Estar Presente and the Botão Vermelho project to aid inhabitants pf neighborhoods in São Paulo (Jardim Elba, Vila Industrial and Favela do Mangue) rendered increasingly vulnerable by the social inequalities exacerbated by the COVID-19 pandemic.