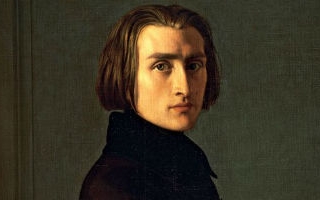 The newly formed Ohio Chapter of the American Liszt Society (ALS) will host a lecture and two concerts in Weigel Auditorium on Sunday, Oct. 18 beginning at 4 p.m. for its inaugural event in celebration of Liszt’s October birthday. The concerts will be performed by Ohio ALS society members and guest pianists. A total of 13 pianists will be participating.

The event is free of charge and will begin at 4 p.m. with a pre-concert talk entitled “The Two Liszts” by Arved Ashby, musicology, and a panel discussion.

In his talk Ashby will address the split-personality aspect of Liszt, saying, “Liszt was the most famous instrumentalist in all Europe, the first ‘rock star’ who broke both hearts and piano strings wherever he went, yet he also retreated from public life and wrote music so monastic and rarefied that time seemed to stand still.”

The first concert will begin at 4:30 p.m. in which James Tocco, University of Cincinnati-College Conservatory of Music, will play the entire Harmonies Poetiques et Religieuses.

A reception with birthday cake will be held between the two concerts.

ALS main founding member and president Caroline Hong (Ohio State, associate professor of piano) believes that the audience will experience a palpable camaraderie between the concert performers. On Liszt himself she says, “Many are not familiar with the scope of his compositional genius, but most are aware of his virtuosic capacity and the pushing of pianistic frontiers for the soloist.”

Franz Liszt gained renown in Europe during the early 19th century for his virtuosic skill as a pianist. He was said by his contemporaries to have been the most technically advanced pianist of his age, and in the 1840s he was considered to be the greatest pianist of all time. Liszt was also a well-known and influential composer, piano teacher and conductor.

As this is an inaugural event to open the Ohio ALS chapter, there will be applications on hand to join the ALS at the national level; those members will automatically become members of the Ohio Chapter, and will be given priority for performance consideration for its annual events.

Hong said, “The most valuable side-effect of the American Liszt Society is the creation of a family of artist scholars who form lifelong friendships that are based in mutual respect and artistic professionalism of the highest order.”

For details on this event visit the School of Music.
For more information visit the American Liszt Society.