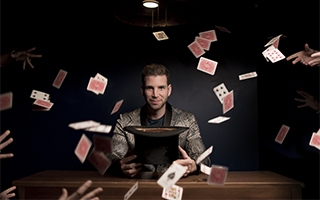 Acclaimed magician and Ohio State English alum Joshua Jay will present the annual Center for Medieval and Renaissance Studies Public Lecture. He will discuss Reginald Scott's 16th-century The Discoverie of Witchcraft, a work widely considered to contain the first published accounts of illusion and stage magic. In order to debunk contemporary belief in witchcraft, Scott demonstrates how supposedly magical acts were in fact staged performances. Jay will talk about the significance of Scott's book to the history and art of magic, while also performing some of the illusions it discusses.