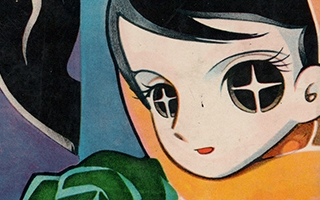 The Ohio State University Billy Ireland Cartoon Library & Museum is excited to announce an upcoming exhibit, World of Shojo Manga: Mirrors of Girls’ Desires! on view from March 28th to July 5, 2015 in the museum galleries in Sullivant Hall.

Many different kinds of manga have been published for different ages, genders, and fans’ favorite themes since the 1970s. One of the major characteristics of Japanese manga is that it has split into Boy’s (Shonen) and Girl’s (Shojo) manga, each developing in its own way. Based on readers’ expectations, each boy’s and girl’s manga has its own theme. Regardless of the subject, the main theme in boy’s manga is competitive fighting, how the heroes become men by protecting women, family, country, or the earth from enemies. The theme of girl’s manga is simply love. In brief, the most important thing for girls is how to find love through a process of overcoming obstacles; however, the topics in shojo manga have changed in response to girls’ expectations and have developed into diverse subjects over the last 70 years since World War I. This exhibition will focus on discussing the specific phenomenon of women's changing roles and expectations in Japan. The artworks of twelve artists (total about 100 pieces) has been chosen to address this theme through the diverse subjects in their manga. The artworks are composed of two qualities: original art and reproductions. Original shojo manga books/magazines and other related materials (e.g. figures, toys) will be displayed along with the artworks in their context to help audiences understand the power of visual pop culture since the influences appear often in mass media, including TV animation and toy products.

The gallery is open Tuesday to Sunday, 1-5 p.m.