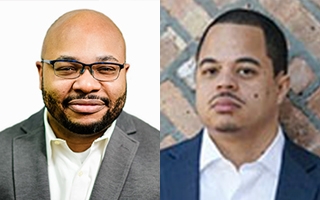 Shannon King is the author of Whose Harlem Is This, Anyway?: Community Politics and Grassroots Activism during the New Negro Era. His research and teaching interests include African American urban and cultural history, black freedom studies and criminal justice and carceral studies. His work has been published in the Journal of Urban History and History: Review of Books and awarded a residency at the Schomburg Center for Research in Black Culture. He is working on a book manuscript on race, crime and punishment in New York City during the 1930s and 40s, tentatively titled Policing the Crisis: Black Protest and Law and Order in New York City during the Riot Era.

Carl Suddler is an African American historian whose research interests lie at the intersections of youth, race and crime. Suddler’s scholarship is committed to developing better understandings of the consequences of inequity in the United States. His research and teaching interests are related to 20th century U.S. history, African American urban history, histories of crime and punishment, the carceral state, sport history and histories of childhood and youth. Suddler’s first book, Presumed Criminal: Black Youth and the Justice System in Postwar New York, points to a critical shift in the carceral turn between the 1930s and 1960s when state responses to juvenile delinquency increasingly criminalized black youths and tethered their lives to a justice system that became less rehabilitative and more punitive. His other works have also appeared in scholarly and popular outlets such as the Journal of American History, Journal of African American History, American Studies Journal, as well as op-eds for the Washington Post, The Conversation and Bleacher Report. Suddler earned his B.A. in history and Black American studies from the University of Delaware and his Ph.D. in history from Indiana University, Bloomington. Prior to his appointment at Emory, he was an assistant professor of history at Florida Atlantic University and a postdoctoral fellow at the James Weldon Johnson Institute for the Study of Race and Difference at Emory.