Each spring, the College of Arts and Sciences' Honoring Excellence ceremony recognizes a distinguished few of our more than 220,000 living alumni whose accomplishments are tangible evidence of the lasting value of an Arts and Sciences education. Their contributions and achievements in their chosen fields, communities, country and university are creating a lasting impact — locally and globally.

The ceremony features the following honors:

This year, Honoring Excellence will celebrate seven individuals for their extraordinary successes and service. With backgrounds and careers spanning the areas of technology and entrepreneurship, marketing, drug development, public service, entertainment and media and international relations, this year’s group of honorees exemplify what it means to be a Buckeye for Life. They will be recognized in person at a college-wide celebration on April 1. 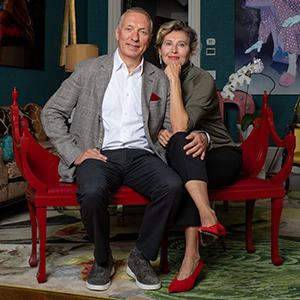 Ratmir Timashev is a globally recognized entrepreneur, technologist and philanthropist. He is the founder of Veeam Software — the global leader in cloud data protection and management software, headquartered in Columbus, Ohio, as well as Kubeshop and SaaS Studio, software incubators. A champion of education and technological innovation in the Midwest, Timashev's family foundation is a leading supporter of Ohio State.

He earned a master’s degree in chemical physics from Ohio State in 1996 and maintains strong ties to the university, where he has established several scholarship funds for undergraduate students and scientific research. In 2016, he created the Dr. Terry A. Miller Post-Doctoral Research Fellow in Chemical Physics in honor of his mentor and friend. In 2020, Ratmir and his wife, Angela Timashev, directed their foundation’s major gift to the College of Arts and Sciences to endow a state-of-the-art music facility as part of the university’s emerging Arts District.

Angela is an avid art collector who thrives in creative environments and supports artists from around the world and has maintained a global philanthropic presence throughout her life.

The couple currently lives in Connecticut with their children, Dasha, Matvey and Philipp. 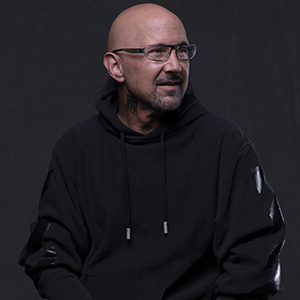 Chief Marketing Officer (CMO) Jeff Charney is a marketing industry executive and creative leader who, alongside his teams — through both out-creation and disruption — has transformed the marketing and advertising industry.

Charney is often described as the “Lorne Michaels of Marketing” because of his similar emphasis on using “Saturday Night Live”-like improv actors to create humorous, timely content that capitalizes on social and cultural currency. His ability to stay relevant has earned him unrivaled success as a marketer and led to the development of not just one, but three of the most historic brand icons of this century with the Aflac “Duck,” Progressive’s “Flo,” and the newest of his Charney-created characters, the parental-life coach affectionately known as “Dr. Rick.”

Along the way, Charney’s game-changing marketing has led to him being one of the nation’s most heralded chief marketing officers (CMO). Charney and his teams have won more than 100 national and international awards — and even presidential recognition — for their creativity, communications and business effectiveness. The most recent recognition came in June of 2021 when Charney was named the “Brand CMO of the Year” by Ad Age, the industry’s leading publication.

Charney earned his master’s degree in communications and journalism from Ohio State in 1982. 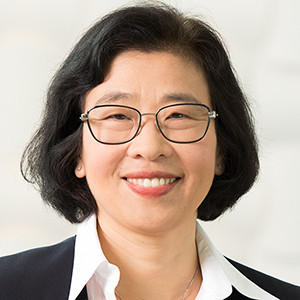 Dr. Jingrong Jean Cui is an internationally renowned oncology drug designer with more than 25 years of experience in drug discovery and project management at major pharmaceutical and biotech companies. As the scientific founder, president and CEO at BlossomHill Therapeutics (BHT), she led the invention of Pfizer’s precision oncology medicine, Crizotinib, which gained fast-track approval from the U.S. Food and Drug Administration (FDA) in 2011 for ALK-positive late-stage non-small cell lung cancer.

Prior to BHT, Cui was the scientific founder of Turning Point Therapeutics (TPT), focusing on the design and development of novel medicines for cancer patients. At TPT, she created four clinical compounds for addressing cancer resistance, with the leading compound, Repotrectinib, achieving FDA Breakthrough Therapy Designation.

Cui and her Crizotinib chemistry team at Pfizer were selected for the 38th National Inventor of the Year Award in 2011. Cui was also awarded two Pfizer Worldwide R&D Achievement Awards, and the Pfizer Innovation Award that same year.

Cui received her PhD in organic chemistry from Ohio State in 1994 and her MS and BS from the University of Science and Technology of China. 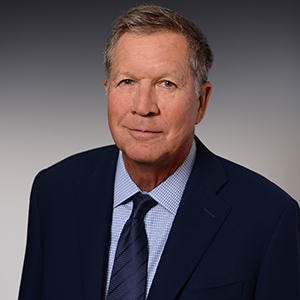 The Honorable John Kasich is the two-term former governor of the state of Ohio, a policymaker, a New York Times best-selling author, former television host and American citizen who believes unity is the answer to our most common problems.

Gov. Kasich has had a storied career in both the public and private sectors. He served as a member of Congress from central Ohio for 18 years. He was elected to the U.S. House of Representatives at just 30 years old, after having become the youngest state senator in Ohio history. He went on to become the chairman of the House Budget Committee and balanced the Federal Budget four times. After leaving Congress in 2000, Kasich worked as a managing director in the Investment Banking Division of Lehman Brothers, where he helped companies secure the resources they needed to succeed and create jobs.

Kasich is the author of four New York Times best-sellers: Courage is Contagious; Stand for Something: The Battle for America’s Soul; Every Other Monday; Two Paths: America Divided or United; and It’s Up to Us: Ten Little Ways We Can Bring About Big Change.

Kasich earned his bachelor’s degree in political science from Ohio State in 1974. He also served the university as a Presidential Fellow. 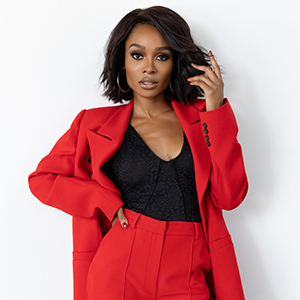 Zuri Hall is an Emmy Award-winning television host, entertainment reporter and producer. She currently serves up personality packed with charisma, empathy and insight on some of the country’s top-rated shows, including “Access Hollywood” and NBC’s “American Ninja Warrior.” The Ohio native's YouTube channel, HeyZuriHall, boasts more than five million views.

Before joining “Access Hollywood,” Zuri could be seen across all E! Entertainment platforms as an E! News correspondent; co-host of “What the Fashion” on Snapchat Discover; and creator, host and co-producer of “What's Good with Zuri Hall” — an E! News original series that took a bite-sized deep dive into pop culture topics celebrating and exploring diversity in Hollywood.​

Hall uses her platform to motivate and empower women to live their best lives with substance and style. She gave the NAACP keynote speech on the power of voting and personal economic empowerment at her hometown chapter's 2018 Freedom Fund banquet; and participates in the Ad Council's “Know Your Girls” campaign to raise breast cancer awareness for Black women. Her passion for working with single mothers and underprivileged youth drives her volunteer time at local shelters and organizations, including Alexandria House.

She graduated from Ohio State with her bachelor’s degree in communication in 2010 and currently serves on the School of Communication Advisory Committee. 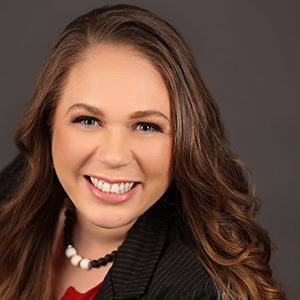 Gretchen Klingler is the Veterans Outreach Manager for the U.S. Global Leadership Coalition (USGLC), a bipartisan 501(c)3 based in Washington, D.C., whose objective is to educate the public on the broad mission of the International Affairs Budget (IAB) and advocate to U.S. Congress to fully fund this budget every year. Klingler is responsible for veterans’ outreach and event programming in-person and virtually across 16 states. She is also tasked with identifying veteran community leaders, educating these leaders on the breadth and depth of the IAB, and empowering veterans to share their experiences with their elected officials in support of diplomacy and development.

Prior to attending Ohio State, Klingler served on active duty for six years as an Airborne Tactical Systems Operator in the Air Force Special Operations community, deploying to Afghanistan in 2013 and Djibouti and Iraq in 2014. She learned the Iraqi dialect of Arabic while stationed at the Defense Language Institute in Monterey, California, and was able to utilize her language skills to supplement communication between U.S. forces and Iraqi local contractors while forward deployed.

At Ohio State, Klingler volunteered teaching English and American citizenship to the Iraqi and Syrian immigrant and refugee communities in Hilliard, Ohio, conducting classes in both English and Arabic. Her undergraduate research with Iraqi women was presented at local, national and international conferences. She also served two years as the president of Ohio State’s Student Veterans of America chapter, Vets 4 Vets, and was a Major Lawrence Miller Military Community Advocate. In 2017, she was honored as the Ohio State Veteran and Military Student of the Year and was selected by the Pat Tillman Foundation as the university’s first undergraduate Tillman Scholar. Klingler graduated in 2019 with dual bachelor's degrees in anthropology and Arabic with minors in women’s, gender and sexuality studies and Middle East studies. 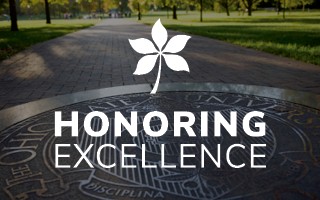