A group of curious students surrounds Jason Rawls, who cracks a smile as one of them approaches an impressive DJ turntable setup.

“You don’t have to push it,” he tells her before demonstrating how to scratch on a record. “It’s simple.”

The student rhythmically glides the vinyl back and forth across the needle with her fingers, eliciting the classic sound that’s been associated with hip-hop for decades. The students applaud, and Rawls beckons another student forward.

In another classroom, Celia Peters’ students have just finished watching “Devil in a Blue Dress,” a film set in 1948 about a black World War II veteran who faces discrimination as he investigates a woman’s disappearance.

“This is not what we typically see in terms of black sexuality,” Peters explains after breaking down a scene.

After some more discussion, the students perform some off-the-cuff roleplaying as characters portrayed by Denzel Washington and Don Cheadle in the movie. The exercise encourages them to deeper understand whom they’re portraying for a more immersive analysis. 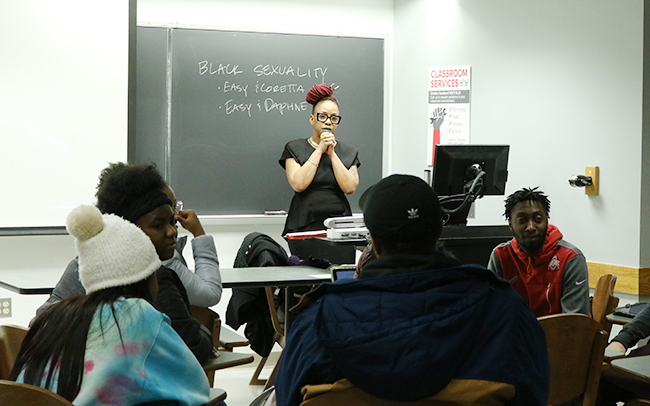 Lecturer Celia Peters, a filmmaker, observes students during an exercise in her class, "Black Visual Culture and Popular Media."

Rawls, a hip-hop producer, and Peters, a filmmaker, are lecturers this semester in the Department of African American and African Studies (AAAS). Rawls teaches AFAMAST 3450: “The Art and Politics of Hip Hop,” and Peters leads AFAMAST 4571: “Black Visual Culture and Popular Media.” Both are artists in the industry guiding students through some of the essential periods and milestones of African American popular culture in music and film.

“It’s important to teach pop culture through a more transhistorical lens or through the broad art of this history,” said Simone Drake, professor and chair of AAAS. “Culture, especially in the African American experience, has been connected intricately to protest and resistance. You had freedom songs during the civil rights movement and during slavery you had spirituals. Those are folk traditions rooted in the popular realm.”

“The Art and Politics of Hip Hop” touches on various aspects of the genre — from its origins in The Bronx to how it’s influenced pop culture. The class explores formal elements of hip-hop, the misogyny and underrepresentation of women, black activism and how hip-hop intersects with society.

“The students identify with hip-hop, but they might not really know much about the culture as a whole,” Rawls said. “So what we try to do is fill that gap.”

From Grandmaster Flash to Kendrick Lamar, here’s a Spotify playlist of essential hip-hop tracks curated by Jason Rawls that tells the story of the genre — from its roots in The Bronx through today.

Peters’ class, “Black Visual Culture and Popular Media,” examines black characters in various films across time and asks students to make connections between those characters, the plots they’re involved in and the music that might symbolize them. The students view a different film each week before analyzing various roles and discussing how different soundtracks personify them and their story.

“We get them in the headspace of thinking about narratives and how different art forms and media can support a narrative about a character in a way that’s not completely linear,” Peters said. 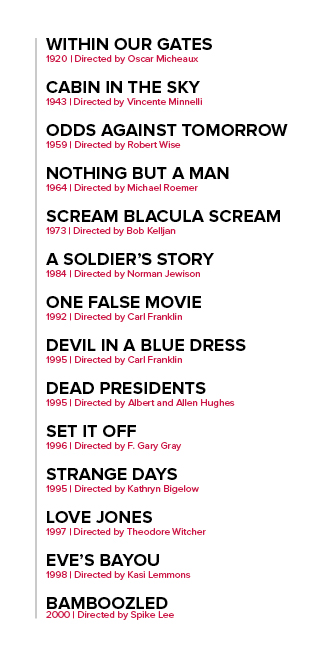 For Drake, inviting Rawls and Peters to teach these courses is an opportunity for students to learn about the intersections of art and the African American experience not just analytically or theoretically, but practically.

“It’s important that students get to have access to and experience learning from those who are actually doing art in practice,” she said. “For these courses, it brings an interesting balance between analytical and practical.”

Rawls has collaborated with musicians such as Mos Def, Aloe Blacc and the Beastie Boys. Peters has worked on various film projects for nearly 20 years and is currently developing her first full-length feature. Together, they are able to call on their expertise in the topics they teach and can invoke their own perspectives and experiences in their lessons.

“Black Visual Culture and Popular Media” is offered every autumn and spring and has generally been taught by Drake or other AAAS faculty. “The Art and Politics of Hip Hop” is a new course this spring. Drake hopes to offer it again next spring and is working on ways to create community workshops off-campus that dive into similar topics.

Though Rawls and Peters’ future involvement is unclear as both continue to work in their respective industries, they say their time teaching at Ohio State has been invaluable.

“Being able to teach what you love is a feeling that I can’t really describe,” Peters said. “I’m really grateful to Simone for giving us the opportunity to do this.”

Added Rawls, “Having gone through the hip-hop scene and having lived it enables me to bring that excitement to the classroom, and I think the students see that.” 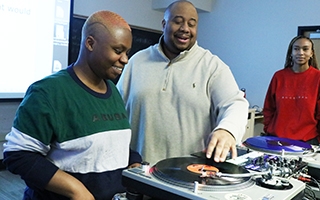