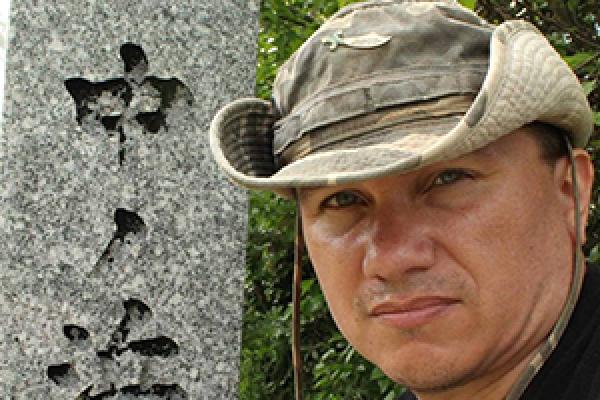 Brian Padgett, a doctoral student in the Department of Anthropology, had been working toward his PhD for nearly nine years. On March 20, his journey was set to culminate with his dissertation defense.

Padgett had long-ago purchased a flight from Hawaii, where he currently lives, to Columbus. He had also booked rooms on campus to use for his defense.

But with restrictions on in-person meetings amid the COVID-19 outbreak, Padgett and his defense committee had to get creative.

Rather than postpone his dissertation defense for weeks or possibly longer, Padgett and the committee decided to continue with March 20. He would defend his dissertation remotely from Hawaii as committee members from Columbus to Montana joined him live via Zoom.

It would be the Department of Anthropology’s first Zoom dissertation defense since the campus closure.

“An exponential level of stress ramped up after that,” Padgett said.

First, Padgett and the committee members had to make sure they had the correct technology in place. Per Ohio State rules, the group had to ensure that everyone could be seen and heard at all times.

Padgett, who originally prepared his presentation for an in-person setup, had to learn Zoom’s features to make sure he could still clearly articulate his points. On Thursday, the night before the defense, the committee tested their setup for the next day.

In the end, it all worked out smoothly.

“Our online doctoral dissertation defense was wonderfully smooth and engaging, fully allowing the flexibility for everyone to interact and discuss as though we were in the same room on campus,” said Clark Larsen, Padgett’s advisor and a Distinguished University Professor of anthropology. “Nothing can replace the face-to-face dissertation defense, but this was a very close second.”

Padgett spent much of the last two years writing his 500-page dissertation, “The Bioarchaeology of Violence During the Yayoi Period of Japan.” For the paper, he conducted research in Japan from 2016-17, staying in a tiny dorm room at Kyushu University. Using analysis of Japanese skeletal remains from 2,000 years ago, Padgett wrote about the potential origins, conduct and ramifications of violent conflict in prehistoric Japan.

On Friday, the dissertation defense began at 5 a.m. Hawaiian time (11 a.m. in Columbus).

At the two-hour mark. They left him to go to a private video chat, sequestering Padgett in a virtual “room” by himself.

“It was just me looking at a screen of me,” Padgett said. “I put on a timer and started sweating bullets. It took like 10 minutes, really, which isn’t very long, but I was like, ‘What’s taking them so long? Oh, they hated me. This is it. My life is over.’”

But after those 10 minutes, Larsen popped back onto his screen and congratulated him. Dissertation defended.

It was just after 7 a.m. in Hawaii at that point, and Padgett couldn’t celebrate with his friends in Columbus like he originally hoped. But he poured himself a glass of bourbon he had been saving for just this moment and celebrated with his family instead.

Padgett plans to return to Columbus for commencement, whenever it is rescheduled, and celebrate more then.

He’s now using his Ohio State connections and research as a forensic anthropologist for the Defense POW/MIA Accounting Agency (DPAA) in Pearl Harbor. In that role, he conducts analyses to find remains of fallen American soldiers who went missing in action during 20th-century wars and reunite them with their families.

Padgett, an Army veteran who fought in the First Gulf War as an 18-year-old, has wanted to work for the DPAA since the 1990s.

“Coming to Ohio State paved the way to getting my dream job,” he said.