Alumnus Antonio Ranieri describes himself as a logical thinker, a fitting trait for someone who majored in philosophy. When he wants to do something, he figures out how to make it happen. Swim with sharks? No problem. Drink mint tea in Tangier? Check. Walk in Egypt’s Valley of the Kings? Done.

Ranieri isn’t afraid to step outside of his comfort zone, and he’s also no stranger to spontaneous decisions. In fact, all the adventures listed above came from a bucket list Ranieri started right before he graduated from Ohio State in 2009. He’d been accepted to a graduate philosophy program at the University of Houston, but one morning he woke up from a dream about exploring new places, and he decided to pursue another path.

“I was at a cathartic moment in my life at that time, and I called the University of Houston after I woke up and said that I'm not coming this year to join your program,” Ranieri said. “My function will be to travel and see the world.” 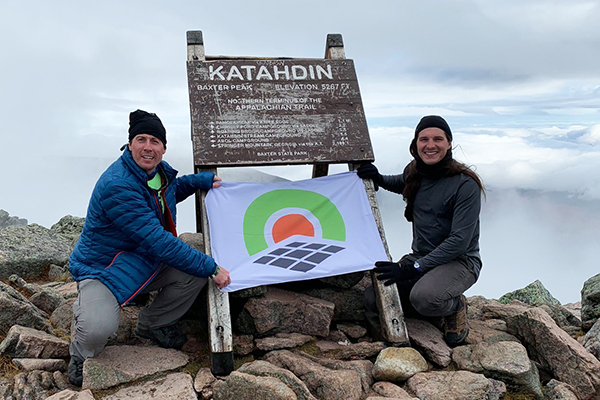 Antonio Ranieri, left, and friend Rudy Schieldknecht pose with a Solar is Freedom logo atop Mount Katahdin, the highest mountain in Maine.

Since then, he’s slowly been working his way down the list, checking off boxes as he accumulates a wealth of new experiences and knowledge. He says studying philosophy at Ohio State provided him not just with the moral and logical skills he uses every day to make decisions at his residential solar installation company, but also the spirit and initiative to set his goals high and see them through. Next up is his tallest challenge yet: summiting Mount Everest this spring.

A Cincinnati native, Ranieri originally started school as a psychology major at the University of Oregon. During his freshman year, he took an introductory philosophy course with a final on The Stranger, an existentialist book by French author Albert Camus, which he read cover to cover.

“The next day I went to the philosophy department and changed my major from psychology to philosophy because I was so fascinated by that story,” Ranieri said. “Then I immediately went and signed up for as many philosophy classes as I could.”

After two years, Ranieri transferred to Ohio State to continue studying philosophy with an emphasis on morality and natural logic — two pillars he says have been critical to his business operations.

“If you can follow a very clear and logical thought process, you immediately put yourself at an advantage,” Ranieri said. 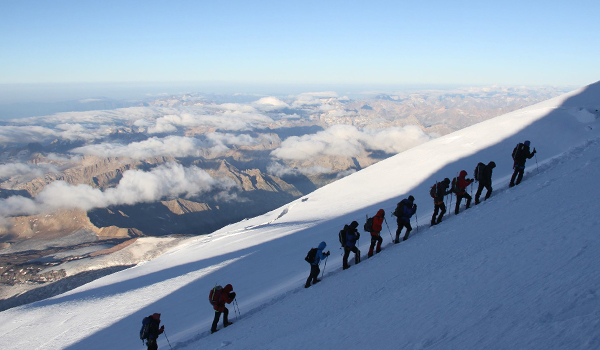 Ranieri, at the front, and fellow moutaineers climbing Mount Elbrus in southern Russia.

He started his company, Solar Is Freedom, five years ago after launching American Dream Contractors in 2011. As he became more familiar with the solar industry, he recognized that creating a company focused on residential solar installation would be a lucrative space to move into. Now, he says Solar is Freedom has eliminated the use of trillions of watt hours of dirty energy — something he’s proud of from a moral perspective, too.

“More important than morality and logic is the innate ability to let your ideas be so strong that they always exist, even when your back is against the wall,” Ranieri said, adding that a paramount lesson he learned as a student was the discovery of personal motivation. “I refuse to lose, and I refuse to give up, which is the same attitude that I think has always made me good at mountaineering.”

Ranieri is striving to join the “750 Club,” meaning he wants to climb the highest peaks on all seven continents and reach the highest points of all 50 states. Mount Everest will be his sixth of the Seven Summits (according to the Bass List), leaving just Vinson Massif in Antarctica, and he’s climbed 40 of the 50 state high points.

That’s a far cry from 2013, the year when he reached the part of his list that said “climb a mountain.” Though he was an athlete in college and a walk-on with the Ohio State football team, Ranieri hadn’t grown up outdoors and was starting from step one. He signed up for a monthlong wilderness school in Argentina, where he learned the fundamentals of mountaineering: how to travel on glaciers, plan and pack for an expedition and survive harsh environments. 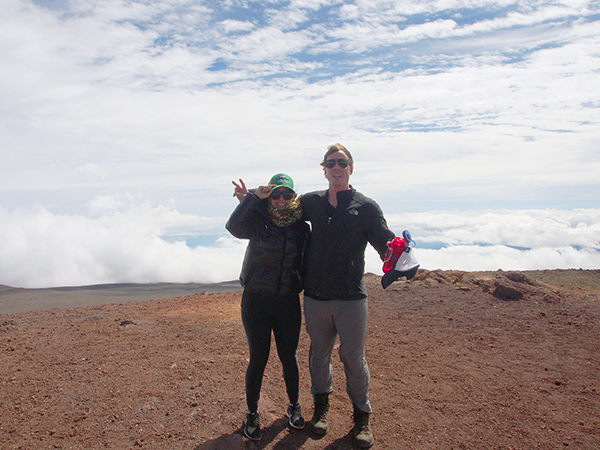 Ranieri and his wife, Raissa, at the summit of Hawaii's Mauna Kea.

Now, ahead of his upcoming trek to Mount Everest, he has a rigorous exercise regimen including cryotherapy, breathing classes and climatization and training hikes. The trip, from start to finish, will take 60 days.

Ranieri said he’s drawn inspiration and drive from Ohio State and its faculty and staff who are constantly striving for excellence, evolving and growing from one year to the next.

“But, at the end of the day, I don't really care if people think what I'm doing is excellent or not,” Ranieri said. “What I need is to have an idea about what I want to be. … It's a very personalized journey. I want to in my heart know that I gave everything that I could to be the best version of myself that I could be.” 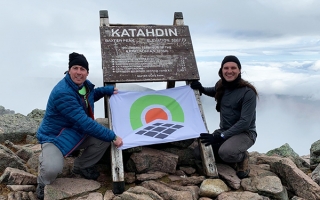