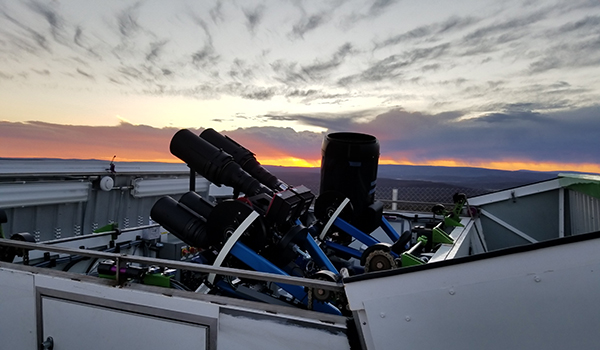 The Payne-Gaposchkin telescope at the Las Cumbres Observatory site in South Africa.

The All-Sky Automated Survey for Supernovae (ASAS-SN), an Ohio State-led automated telescope network that observes the entire sky every night, recently received a combined $3 million in funding, ensuring its all-encompassing surveys through August 2026.

Five-year, $1.5 million grants awarded by both the Gordon and Betty Moore Foundation and the Alfred P. Sloan Foundation will help guarantee ASAS-SN’s images and data continue to support and inform research spanning all branches of astronomy.

“It remains the only project in optical light that actually observes the whole sky frequently,” said ASAS-SN co-principal investigator Krzysztof Stanek, professor and University Distinguished Scholar in the Department of Astronomy. “It’s awesome that foundations like Moore and Sloan want to support this research. We are very grateful.”

The Moore Foundation grant follows its initial $3.1 million investment in 2016, which allowed ASAS-SN to double its number of telescopes from eight to 16.

Today, ASAS-SN consists of 20 automated telescopes distributed around the world that obtain thousands of images per night to find things up to 50,000 times fainter than the human eye can see. The images are catalogued and compared to previous images of the same patches of sky to look for objects that have changed in brightness — in particular, explosive, transient events. These include exploding stars (supernovae), tidal disruption events where a star is ripped apart by a supermassive black hole and events associated with other probes of the variable sky like neutrinos.

ASAS-SN’s surveys have led to a host of significant astrophysical discoveries. In 2015, it discovered the most powerful supernova ever seen — one 20 times brighter than all the stars in the Milky Way galaxy combined. In 2019, ASAS-SN recorded the most detailed tidal disruption event on record. Last January, it discovered a repeating tidal disruption event in which the star orbiting a supermassive black hole has a piece of its mass torn off once every 114 days, the first such object ever found.

An artist's depiction illustrating a repeating tidal distruption event discovered by ASAS-SN in which the star orbiting a supermassive black hole has a piece of its mass ripped away every 114 days.

ASAS-SN’s data are publicly available and are used for research projects by astronomers around the world, with a paper using its data published, on average, every day. Anyone can determine how an object in the sky bright enough to be observed by ASAS-SN is changing in brightness.

For the researchers at Ohio State, making ASAS-SN’s data free to use is vital and adheres to a precedent already set by the Gordon and Betty Moore Foundation and the Alfred P. Sloan Foundation. Because of the foundations’ continued support today, the data ASAS-SN extracts from the skies will serve astronomers for generations to come.

“The database has tremendous legacy value,” said Todd Thompson, University Distinguished Scholar, professor and interim chair of the Department of Astronomy. “It’s not an exaggeration that astronomers 100 years from now will go back to the ASAS-SN database because those stars will still be there.”

“As Yogi Berra once said, ‘You can observe a lot by just watching,’” Stanek said. “We will see an ever-increasing stream of exciting discoveries. We don’t know what will happen next week, but I can promise that something will happen. That’s by virtue of observing the whole sky. If you’re observing 100 million objects, ‘one in a million’ is no longer unusual. That’s the beauty of ASAS-SN.”

In addition to Stanek and Thompson, the ASAS-SN team at Ohio State consists of co-principal investigator Christopher Kochanek, Ohio Eminent Scholar and professor of astronomy; astronomy graduate students Tharindu Jayasinghe, Patrick Vallely, Dominick Rowan and Jack Neustadt; research assistants Zachary Way and Dhvanil Desai; Center for Cosmology and Astroparticle Physics (CCAPP) fellow Subhash Bose; and Arts and Sciences Distinguished Professor in the Department of Physics and CCAPP director John Beacom. ASAS-SN is supported by the Las Cumbres Observatory and funded in part by the National Science Foundation, the Mt. Cuba Astronomical Foundation, the Center for Cosmology and AstroParticle Physics at Ohio State, the Chinese Academy of Sciences South American Center for Astronomy and the Villum Fonden in Denmark. 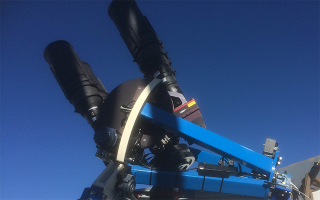