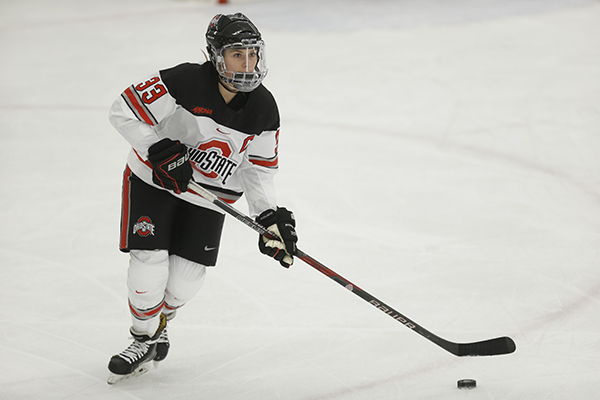 Jincy Dunne, a 2019 psychology grad, will be skating for Team USA at the Winter Olympics.

Two Arts and Sciences students will be competing at the 2022 Winter Olympic Games in Beijing starting this week, both playing in the women's hockey tournament.

Jincy Dunne, a 2019 psychology graduate, will join Team USA as it looks to defend its gold medal from the 2018 Winter Olympics in Pyeongchang, South Korea. Dunne will be competing in the Olympics for the first time. In her Ohio State career, Dunne was named the 2020 Ohio State Female Athlete of the Year and received the Big Ten Medal of Honor. She was twice named the WCHA Defensive Player of the Year and is Ohio State’s first and only two-time AHCA First Team All-American.

“I am so happy for Jincy on making the Olympic roster,” said Dunne's Ohio State teammate, senior defenseman Sofie Jaques. “I know this is something she’s been dreaming about her whole life and with all the work she’s put in over the years on and off the ice, she deserves it more that anyone I know.”

Andrea Braendli, a current Buckeye who is double-majoring in psychology and criminology and criminal justice, will be playing in the women's hockey tournament for Switzerland. The current Ohio State goalie, Braendli will be participating in her second Olympics and will be Switzerland's starter in goal. This year for the No. 2-ranked Buckeyes, she has played in 12 games and boasts a .924 save percentage. She is the winningest goaltender in Ohio State history with 56 wins for her career so far.

"I want to show who I am as a Buckeye and as a Swiss national team member. I want to show what this program gave to me in the past four years,” Braendli said. “I grew a lot and I feel like coming here, to play for Ohio State, was the best decision I could ever make. I want to show to everyone that I’m really proud to be a Buckeye."

Dunne and Braendli aren't the only Buckeyes in Beijing. Six current and former Ohio State women's hockey players are representing five countries in the 2022 Olympics.

The pucks have already dropped in the women's hockey tournament. The full hockey schedule can be found on the NBC Olympics website.