It’s April 2014 — just a few weeks after Russia’s annexation of Ukraine’s Crimean Peninsula — and Sonya Bilocerkowycz MFA ’17 is walking through a small cemetery in western Ukraine with her elderly cousin, Marina.

Bilocerkowycz, who earned her MFA in creative writing from Ohio State, explores that question — along with themes reconciling her American upbringing and Ukrainian heritage — in her debut book On Our Way Home from the Revolution, published in 2019 by The Ohio State University Press. 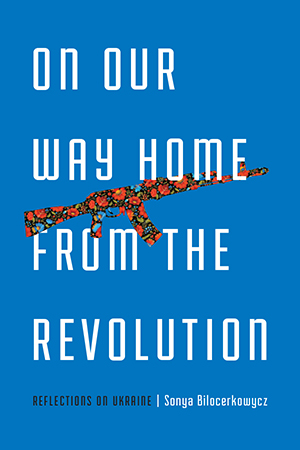 Now, as she watches the full-scale Russian invasion of Ukraine violently unfold from afar, Bilocerkowycz feels that question is being answered.

“At this moment, I’ve been thinking a lot about that interaction,” she said. “It seems obvious that Putin’s only intention is the destruction of Ukrainian identity and Ukrainian life. … In the most grotesque and tragic terms, the answer is being displayed in a really horrible and dramatic way.”

On Our Way Home from the Revolution is a series of essays that cover, among other topics, Bilocerkowycz’s experience in Ukraine’s capital during the Maidan Revolution, her losing a relative in the Chernobyl disaster and political protests at the Ohio Statehouse. The granddaughter of Ukrainian refugees who came to the U.S. in the aftermath of World War II, Bilocerkowycz contemplates Ukraine’s past and present and grapples with how her cultural duality has shaped her sense of ancestral identity.

“I care very much about these subjects,” Bilocerkowycz said shortly after the book was published. “But I’m not a political scientist, and I’m not a sociologist. I really wanted to approach these topics from a literary and personal perspective. I’m writing about Donald Trump, John Boehner, Vladimir Putin and Viktor Yanukovych and all these major figures, and I really wanted to think about how their actions resonate with me on a personal and familial level.”

More than two years after On Our Way Home from the Revolution was published, Bilocerkowycz, a lecturer of English and creative writing at the SUNY Geneseo, circles back to its essays and their themes in the wake of the Russian invasion.

“I feel grateful I had the opportunity and the support to document that moment in time,” she said. “The conversation I hope it starts for members in the diaspora, I’m grateful it’s out there and that it can maybe serve as a resource for some who are looking for other points of entry into understanding what’s going on.”

Bilocerkowycz was recently awarded a 2022 National Endowment for the Arts Creative Writing Fellowship, which awards recipients $25,000 to allow “time and space to create, revise, conduct research and connect with readers.” Bilocerkowycz is using the support to focus on her second manuscript, which is in its early stages but will explore themes of surveillance in American and Eastern European contexts.

“I’m still trying to figure out what form it wants to take right now, but it feels like a sort of speculative nonfiction,” she said. “I don’t know exactly what genre it’s going to end up being, but I’m having a lot of fun writing it.” 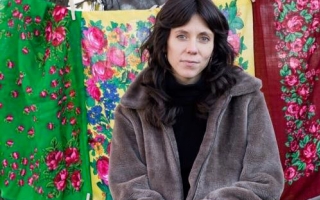