When undergraduate neuroscience student Yasmeen Quadri arrived on Ohio State’s campus as a freshman, she was determined to continue giving back to the community.

“I’m Muslim, and one of the five pillars of our religion is called ‘zakat,’ which means alms-giving or charity, so from an early age I would volunteer with friends and family,” said Quadri, a fourth-year neuroscience student. “It’s very core to my identity.”

Talking with peers during her first week of classes, she found out students mostly heard about service opportunities by word of mouth or involvement in clubs.

Immediately, that knowledge inspired her. 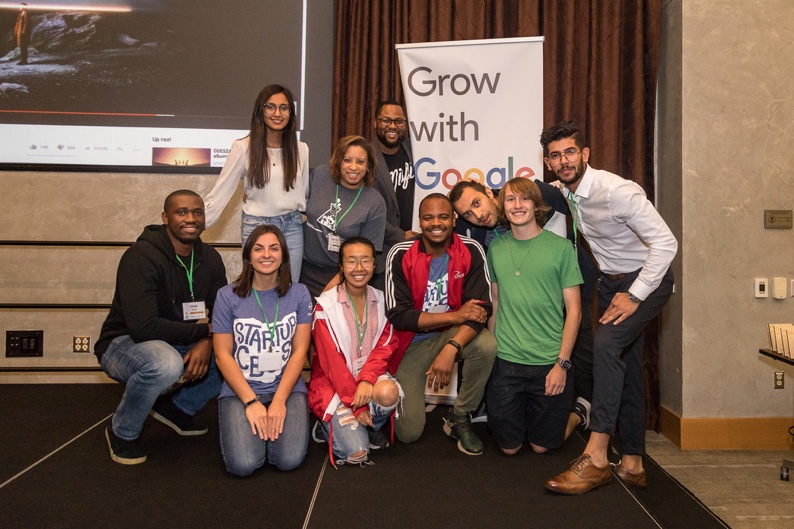 As an Eminence Scholar, Quadri knew she had to devote herself to a cause that would make a positive contribution to the world. Developing an app that connects college students to volunteer opportunities would benefit countless cities across the country.

She presented her idea to the Eminence Scholar program director and was encouraged to pitch at Google’s tech startup competition that weekend. Quadri earned third place, and several people asked about joining her company, ServUS.

That was in 2018. Following the initial spark, the ServUS team developed a prototype. But then COVID-19 hit.

“It was painful because I had this beta test I had been working on for a year and a half at this point, but I couldn’t test it,” she said. “That was a big moment for me, as the founder, because I was just trying to figure out what my next steps would be.”

When she heard about the President’s Buckeye Accelerator, Quadri knew that would be the last chance for ServUS to happen at Ohio State.

The Ohio State Keenan Center for Entrepreneurship established the President’s Buckeye Accelerator to support student founders preparing a startup for launch. The program provides entrepreneurship skill building, deep mentorship, community and funding in parallel with pursuing a degree of any level at the university. Besides Quadri, many Arts and Sciences students were part of the six ventures selected for the yearlong accelerator program and received $50,000 after competing in a six-week Boost Camp.

Garrett Carder, a computer and information science undergraduate student, had a much different journey leading him to the program.

He applied to the President’s Buckeye Accelerator with two Arts and Sciences students he had already collaborated with on projects. Caroline Karbowski, a biology student, met Carder at a dining hall when they were freshman and enlisted his help in revamping the website for her nonprofit See3D. Carder became friends with Enan Srivastavathe following year, working together at See3D before Srivastava left to pursue other ventures. With the accelerator program, all three were excited to collaborate again and make a difference in the blind and low-vision community.

The initial pitch was an extension of See3D, which prints and distributes 3D printed models for the visually impaired, because the team sought to make 3D printing more accessible. However, mentors within the program advised them to focus more on the problem they want to solve instead of the solution. 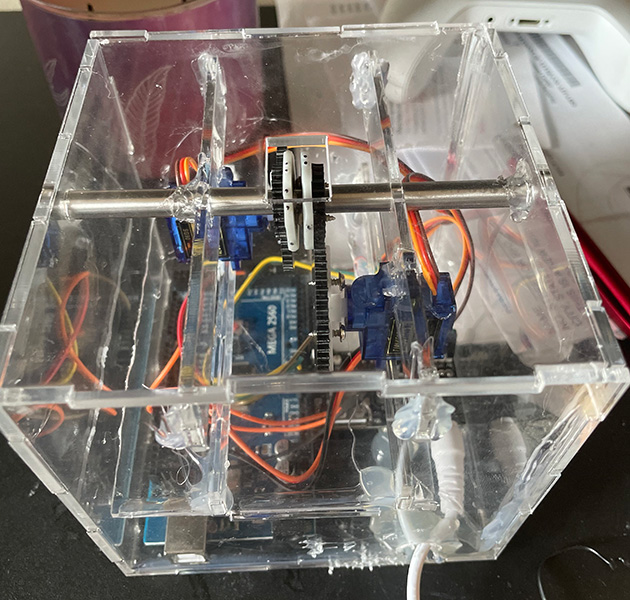 An early iteration of the Braille Enigma Reader.

That shifted their focus from 3D printing technology to the broader issue of braille accessibility. While staying up late one night, Carder began sketching out what would become the Enigma Braille Reader, which under the new company A3 Design, turned into the team’s final pitch for the President’s Buckeye Accelerator.

Braille readers are an alternative option to screen readers for people with visual impairments as they allow tactile reading from a computer or mobile device. On the flat surface of the Braille reader’s display, tiny plastic pins pop up and down through holes to display different characters. Many of these devices must be connected to the computers or mobile device they are reading from so the proper dot sequences can be transmitted to the reader. 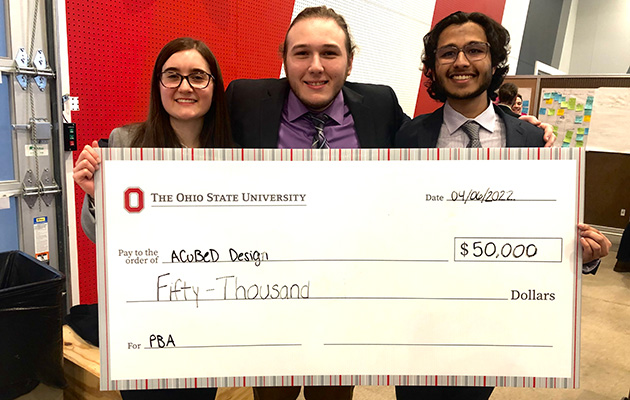 A3 Design team with a giant $50,000 check from the President's Buckeye Accelerator.

The Enigma Braille Reader should have no problem setting itself apart from the competition. The base model will feature an industry-standard 14-character display, but it will also allow customers to plug and play different modules. Enigma Braille Reader add-ons are low cost and offer a diverse array of capabilities, like helping users cook using a temperature sensor or interactively learn more Braille with a learning module. The device is two-thirds the cost of the cheapest braille readers on the market, which have similar 14-character displays but don’t offer the same degree of functionality. With the funding from the accelerator program, Carder will work on designing a full prototype, hiring engineers to create the first model and creating 250-300 devices that can be beta tested by the visually impaired.

Tessa Cannon, a third-year anthropology doctoral student, founded her nonprofit For the Love of Primates around the same time that she came to Ohio State.

Ever since her undergraduate studies, Cannon has been passionate about helping sanctuary primates. After raising and re-releasing orphaned primates in South Africa, she went on to learn more about primates from compromised backgrounds in the U.S. She was shocked at how many primates retired from research, used in the entertainment industry or previously kept as pets are killed instead of surrendered to a sanctuary after they are no longer needed.

Before applying to the President’s Buckeye Accelerator, Cannon focused on community outreach to raise awareness of this issue and the need for more sanctuaries. But forming connections with professionals who are passionate about her cause and receiving more funding because of the accelerator program has turned her dream of opening her own sanctuary into a reality. 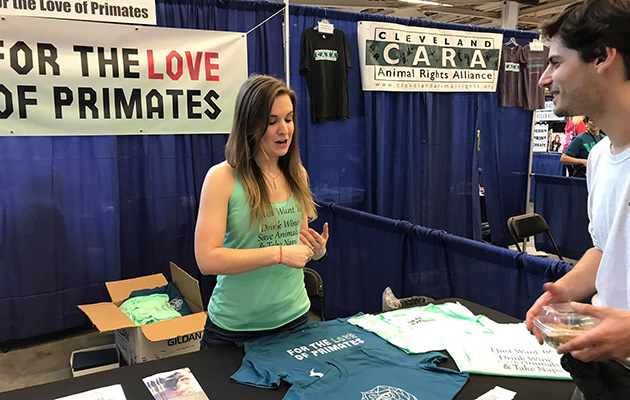 Tessa Cannon presenting information at a For the Love of Primates booth.

Cannon found reputable contacts to help her team draft a design of the new sanctuary and secure property with enough acres for expansion.

“Once we have those plans, we’ll be able to ramp up our fundraising even more because a lot of people want to see where their money is going and what we’re going to build instead of just talking about this imaginary place as of right now,” Cannon said.

Showing that plans for the sanctuary are underway will attract more donors, strategic partners and interest from laboratories, but she had a head start with that during the Boost Camp. When her team’s pitch was evaluated, an external judge who happened to hold shares in a medical testing company expressed that he wanted to stay in contact.

Cannon’s team worked with Scott Griffin, director of entrepreneurial programs and talent at Ohio State’s Keenan Center for Entrepreneurship, who gave advice on how to keep going after the program.

After Quadri’s progress in launching a ServUS app was derailed by the pandemic, her team needed some encouragement going into the Boost Camp. Their mentor, Tess Mateo, executive-in-residence at the Keenan Center, helped reinvigorate their spirits and inspire new directions for the startup.

“She really pushed me and my team constantly,” Quadri said. “She pushed me to be a better leader, and she pushed my team to be innovative and think outside of the box.”

The ServUS app aims to be more than a volunteer management platform by organizing volunteers around the causes they’re passionate about. The pandemic hadn’t stopped Quadri’s team from caring about communities. Participating in pandemic relief efforts and advocating for social issues inspired them to think more about how they can customize the app.

When a user opens the app, they complete a short questionnaire to narrow down service opportunities and community partners. By choosing the United Nations Sustainable Development Goals they want to support, users will understand that all 17 choices ultimately lead to a better future. Then, they will be asked about whether they’re looking for short- or long-term opportunities, if they can provide transportation or want to pitch their own initiative. The app will populate everything that matches their interests, including events, nonprofits, student organizations and social enterprises that need help.

“When a student gets to campus, we want to tap their talent for bettering their community,” Quadri said. “We want to help empower them toward building a sustainable future.”

Beyond Mateo’s mentorship, Quadri didn’t realize how essential the Boost Camp would become in strengthening essential skills she’d need to have as an entrepreneur. From networking to pitching, every week she encountered situations where she had to hold her own against industry professionals.

Quadri also couldn’t believe the inspiration and collaboration she’d get from meeting other passionate people. During one session, Dominique Hadad, 2021 President’s Prize winner for the sustainability-focused consultation service Green Scope Consulting, told Quadri she’d love to test the ServUS app and potentially be a client. Moreso, the team from energy startup Electrion gave Quadri advice on her pitch, with one member even working one-on-one with her outside of the Buckeye Accelerator meetings. 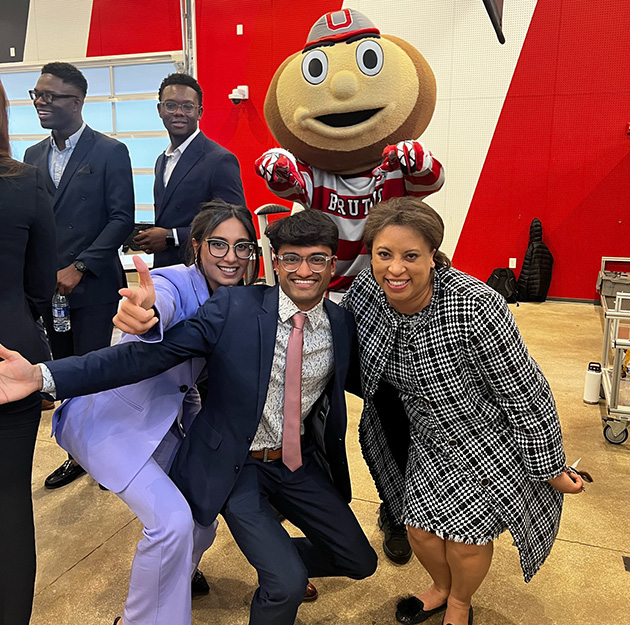 Brutus Buckeye celebrating the President's Buckeye Accelerator with Yasmeen Quadri and others.

“There’s this sense of community with the President’s Buckeye Accelerator,” she said. “It’s not cut-throat competitive; it’s more like everyone wants to see everyone succeed.”

Now, the ServUS team has turned its attention toward gearing up for the start of autumn semester when students return to campus. Before launching an app, Quadri wants to concentrate on a basic website and gather users by collecting emails at student involvement fairs. She has connections at universities across the country from participating in a United Nations youth program, so she plans to find students passionate about volunteering and interested in introducing ServUS on their campus.

“To me, this was what I needed when I got to campus my freshman year,” Quadri said. “If I, as a freshman, had the opportunity to pitch this idea and get the feedback that I’ve gotten this year, who knows where ServUS would have gone over the course of my college career.”