Jordan Davis and the Buckeyes behind Can't Stop Columbus

When day-to-day life first ground to a halt in the face of the coronavirus, Jordan Davis, director of Smart Columbus and co-organizer of Can’t Stop Columbus, felt like she couldn’t help enough by only sheltering in place.

“The idea that there was more I could do — but not through more traditional ways — was really unsatisfying for me, and I’m sure very unsatisfying for a lot of people,” said Davis, who graduated from Ohio State in 2011 with degrees in political science and leadership studies.

Her restlessness prompted her to send a tweet one Sunday evening proposing a virtual hackathon to help Columbus respond to COVID-19. By the next day, it had snowballed into a group of over 150 community members committed to making that happen.

The ensuing organization, an initiative of Smart Columbus called Can’t Stop Columbus, had an original goal of engaging the tech and business community in Columbus, but over its short life, it has grown to be much larger. Now, Davis says Can’t Stop Columbus is a community-wide movement of more than 1,000 volunteers dedicated to helping the community during this pandemic. 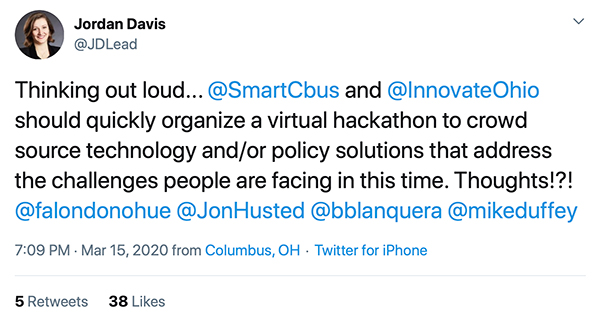 Among the first to respond to Davis’ call to action were five current or former Ohio State students who co-founded a software company, Helm, that builds digital platforms to share projects online and facilitate collaboration.

“It was a real opportunity for us to apply our tool for a greater good,” Hillyer said.

Having a diverse range of academic backgrounds, Hillyer said, means each team member brings his own thoughts and skills that enable the team to look at their company from multiple angles.

“We understand everyone's perspective and how they contribute to our vision,” Hillyer said. “It allows us to make more informed decisions and enter into a space with more perspective.”

Since Can’t Stop Columbus’ launch, the organization has embarked on a variety of community-based projects: helping people understand how to patronize local businesses, reducing the digital divide, increasing ability to meet food bank demands and connecting unemployed people with jobs. 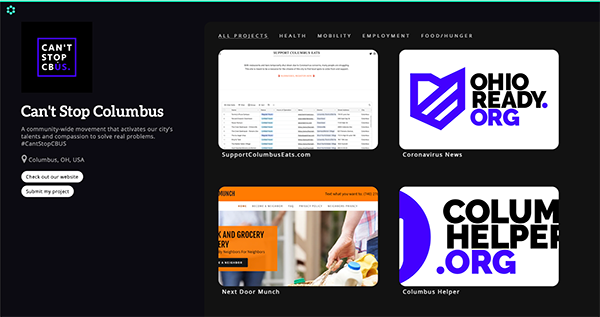 “It wasn’t just me that made this happen by any means,” Davis said. “It was a lot of convergence of passions and a shared interest in trying to help the community. This is the proof that amid this crisis, the community is showing the best version of itself, and people are really trying to band together and give as much as they can to help our neighbors.”

Of those community partners, Davis said Ohio State has been an essential component of making Can’t Stop Columbus work. In addition to Helm’s co-founders, students, faculty and staff across colleges are pitching in to assist however they can.

Davis says her own academic and extracurricular experiences, especially studying political science and her personalized study program in leadership, were a perfect fit to prepare her for her current roles with Smart Columbus and Can’t Stop Columbus.

“I have a more macro view of how systems and communities work together, and I have a great appreciation for the consequential nature of policy and how government and communities need to respond, especially in situations like this,” Davis said.

In addition to her academic studies, Davis also served as vice president of Undergraduate Student Government, an experience she said was “absolutely transformative.” Through that position, she learned how to navigate complex bureaucratic and political systems, a skill she’s carried forward as director of Smart Columbus that enables her to be effective in the world where she works.

Now, she applies her understanding of those systems to identify where innovation can improve how they function, a central goal of the smart cities movement that is closely linked to the goals of Can’t Stop Columbus.

“Smart Columbus really stands for bringing forth technology and innovation to solve community problems. The missions are extremely well aligned, and we can use the established networks, connections and reputation of Smart Columbus to help fuel and accelerate the impact of Can’t Stop Columbus,” Davis said.

She said she thinks the city will be facing the impacts of COVID-19 for a least a year, so Can’t Stop Columbus will remain focused on listening and responding to people's needs as the long-term effects of the coronavirus are revealed.

“I just don’t see on the horizon a way where life isn’t going to be different for the foreseeable future, so in that sense I hope that Can’t Stop Columbus continues to have the support and involvement that it has today,” Davis said. “I hope that we have the fortitude to stay the course toward this effort and really see it through to introduce tools that are really meaningful for the community.” 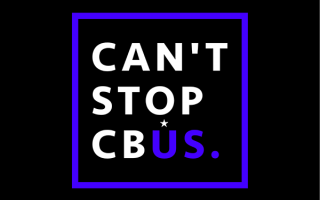