As the first of his family to attend college, everyone was rooting for him to find a fulfilling career path. He attended Cornell University set on becoming a mechanical engineer — until he watched a concert featuring the Urban Bush Women dance company.

“I was so moved and transfixed by not the movement itself but what they were able to say through movement,” Anderson said. “To this day, I will say that dance was my calling.”

After graduating with a BA in choreography and performance from Cornell, Anderson moved to New York City to pursue a career as a performer and choreographer. He performed with renowned dancers, including Mark Dendy, Sean Curran and Ronald K. Brown, but needed additional income to stay in the city. He started teaching chemistry and physics classes at East Harlem School at Exodus House, where he created an afterschool arts program and found a passion teaching dance.

Soon after that, he moved to Philadelphia to be an adjunct professor in dance at Temple University. With encouragement from his colleagues and students, he completed an MFA in dance. Anderson was promoted to visiting assistant professor before moving to Allentown to take a permanent faculty position at Muhlenberg College. There, he continued to teach dance in addition to directing the African American studies program. As the only African American faculty member at the small, liberal arts college, he created an Africana studies minor to diversify the curriculum and to recruit and retain more students of color.

In 2010, he was intrigued when he heard that UT Austin was seeking a dance instructor who specifically had knowledge on the African diaspora. He took the position the following year, taking over as head of the dance program in 2015. Under Anderson’s guidance, UT Austin put more emphasis on moving away from a Eurocentric, western curriculum and found explicit ways of integrating anti-racism and social justice. Adding to the university’s effort, Anderson rebranded the Department of Theatre and Dance master’s degree into an MFA in dance and social justice in 2017. 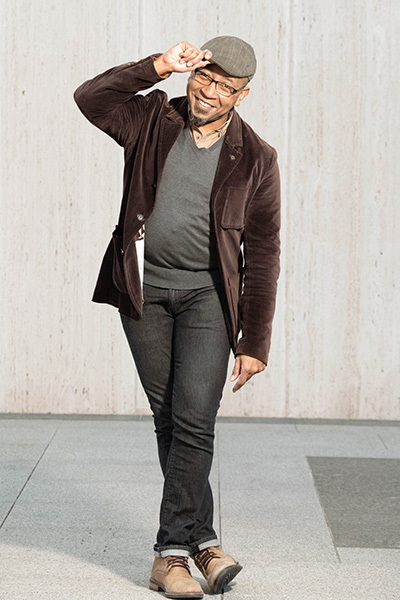 Anderson has been aware of Ohio State since his own college days, which he attributes in part to the respect and prestige the Department of Dance has held among dance students and professionals for decades. He’s also been a fan of Bebe Miller, professor emerita and alumna in the Department of Dance, and has run across a considerable number of Ohio State alumni as a performer. When his role as head of the dance program at UT Austin gave him the opportunity to meet the department's recent chairs at conferences, he heard firsthand the effort Ohio State has made to become a world-class model of inclusive academic excellence.

“What really drew me to the position is the willingness not only of the Department of Dance but of the entire university to really put their money where their mouth is in terms of diversity, equity and inclusion and anti-racism,” Anderson said. “It’s not symbolic. It’s in the fabric of how the university is moving forward, and I couldn’t be more excited to be a part of that.”

When he starts his role as chair of the Department of Dance in June, it will be the beginning of a new era. He’ll dedicate much of his time in those first few months to learning everything he possibly can about what the department has built. As he gets adjusted, he’ll turn his attention toward increasing the prominence of the department throughout the country and world while also thinking about how diversity, equity, inclusion and anti-racism have a place in its programs and culture.

Throughout Anderson’s career as a performer and educator, he discovered a unique way of incorporating interdisciplinary scholarship within dance and choreography while expressing his truths to speak of larger social contexts.

“The themes of my work are often around race representation and sexuality and identity, but oftentimes they are inspired by literary works or folkloric works,” he said. “So almost all of my pieces have come out of books I’ve read or stories that I’ve heard as a child.”

In 2003, Anderson established Dance Theatre X, an Afro-contemporary dance theatre company that creates and performs “pieces that serve as movement-driven testimonies of lived experience,” and it will soon be based in Columbus. Next for Dance Theatre X, Anderson wants to adapt The Tempest by William Shakespeare and would love to collaborate among the arts at Ohio State. He sees the play as an allegory on imperialism and colonization, which will lend well to the adaption’s focus on investigating our beliefs about America.

Beyond thoughts of embracing a new community of students and faculty, Anderson has recognized more benefits of moving to Ohio.

“I’m not excited about the snow, but I am excited about being close to the east again,” he said. “Most of my family is from Virginia, so this feels very much like a homecoming in some ways, especially because I’m also going to be so close to Pennsylvania. One of my former dancers, Abby Zbikowski, is on faculty at Ohio State. It’s wonderful to feel like I’m walking into a community rather than having to create a community. It’s a first for me.”