Home / News & Events / College News / Like dominoes, one triumph leads to another for CIS alum

Like dominoes, one triumph leads to another for CIS alum 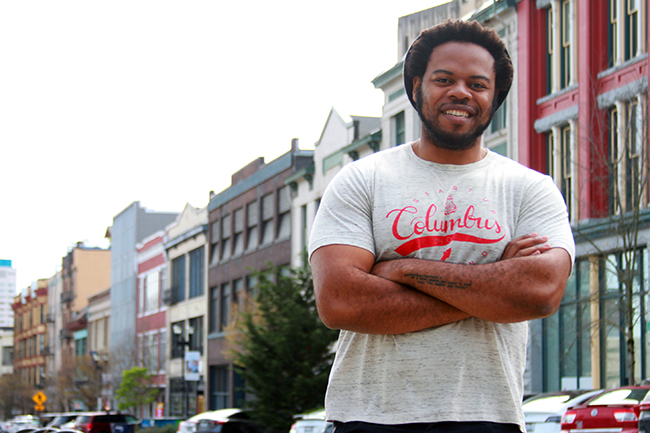 There's no one way to describe Claudius Mbemba.

He’s an Ohio State alumnus, graduating in 2015 with a bachelor’s in computer and information science. He’s an entrepreneur, cofounding the Seattle-based startup, neu. He’s a public speaker, traveling around the country to advocate for more representation in tech and venture capitalism. He’s a volunteer, a mentor, a problem-solver, an activist.

Influenced by his experience at Ohio State, Mbemba has a penchant for saying “yes” when new opportunities present themselves — even if they’re a bit off the wall. So when he was approached to appear on Fox’s new show “Domino Masters,” he again let his curiosity and enthusiasm lead the way.

“I’m a lifelong learner,” he said. “I love to test my ability to learn new things under tight constraints. What better way to learn a new skill than to have to do it on a big stage?”

The studio lights were gleaming, and thousands of dominos littered the floor.

It was May 2021. Mbemba and his teammates had just spent the last 16 hours setting up a dizzying domino display, complete with chain reaction Rube Goldberg machines, playing cards, billiard balls and pyrotechnics.

“This build was an homage to my love and my girlfriend’s love,” Mbemba said. “You know what, Eric? I think I’ve got one more thing I want to say.”

Then Mbemba got down on one knee and proposed to his now fiancée, Kahanu.

It was a fitting way to end a fun, frenetic and fortuitous experience that began six months prior when Mbemba was contacted by a Fox casting scout. The network was gearing up for a new competition show about epic domino structures, and the showrunners were looking for creative people with engineering backgrounds. Even though he’d never built dominoes before, Mbemba fit their criteria perfectly.

“I just kept saying yes to their requests to continue the process,” he said. “They said they wanted to start shooting in May, and I was like, ‘Oh crap. I need to learn how to build dominoes.’”

With his spot on the show solidified, Mbemba dove into the precise world of domino construction, practicing every night, reading about building strategies and watching massive domino demonstrations for inspiration. A few months later, Fox flew him down from his home in Tacoma, Washington, to Los Angeles.

Mbemba, who played football at Ohio State, was matched with two other former athletes to form a team, dubbed the Triathletes. After spending some time getting to know each other, Mbemba and his new teammates were brought to the set to begin shooting. Competing against three other teams, the Triathletes were assigned a massive platform on which to build their epic domino constructions and given 16 hours to complete them.

The episode’s theme was “Time Travel,” and the Triathletes assembled a futuristic dystopia, featuring a flying clock and a flame-spewing, time-traveling car inspired by “Back to the Future.” Boosted by a commitment to storytelling, Mbemba and the Triathletes advanced to the next round where they were tasked with adhering to the theme “Vegas Night.” Their build centered around the romance Las Vegas elicits, and after the dominoes fell, Mbemba turned to the camera and popped the question, knowing he’d be watching the episode with his girlfriend when it aired.

Despite their effort, however, the Triathletes were eliminated, and Mbemba headed back home to Washington state. His final episode premiered on Fox and Hulu mid-April.

The other cast members, the showrunners, everyone was amazing,” Mbemba said. “It all came together really nicely. I definitely look back on it fondly. It was such a new, interesting challenge.”

Though “Domino Masters” was an exceptional experience, Mbemba has never shied away from trying new things. He immigrated to the United States from Cameroon when he was a child and grew up in central Ohio. He came to Ohio State as a Morrill Scholar and secured a spot on the Buckeyes football team as a walk-on. After leg injuries ended his playing career, Mbemba shifted his focus to academics, attending local hackathons, nurturing his entrepreneurial spirit and realizing his passions and identity outside football.

After graduating from Ohio State, Mbemba’s internship at Microsoft gave way to a full-time position in Seattle. He spent two-and-a-half years growing networks and connections within the tech community, and in 2018, he left Microsoft to co-found neu, which connected vacation rental owners with on-demand cleaning services.

And that isn’t all. Mbemba is the Young Buckeyes Chair of the Ohio State Alumni Association’s Seattle chapter. He’s committee co-chair of FIRST Washington, which uses robotics to further provide access to STEM for young people. He’s also investment director for Startup Haven, a venture fund for startups in the Pacific Northwest.

From dominoes to tech and everything in between, Mbemba takes advantage of opportunities as they come. The roots of that mentality were planted at Ohio State.

Ohio State was such a pivotal influence in my life,” he said. “Between athletics, working for the Office of Student Life, academics, the community and the people, my passions were sparked and fueled there.”

Sometime toward the end of 2017, Mbemba was in an airport in Argentina waiting to board a plane back to Washington.

He was working at Microsoft, which flew him to South America to collaborate with another software engineering team. Waiting for his flight, Mbemba strolled through the sparsely populated airport with headphones around on.

He was wearing an Ohio State football shirt.

“I’m walking away toward the gate, and I didn’t think I heard it at first, but I heard ‘O-H,’” Mbemba said. “I stopped and thought, ‘Did someone really just say “O-H” in this airport in Argentina?’ I turned around and this lady was looking at me, and I was like ‘I-O!’”

“I thought ‘Wow. Ohio State really is that far-reaching.’ I always go back to that moment when I think of how impactful Ohio State has been for me.”