Imagine if you could see something the size of a coin at the distance of the moon.

That’s roughly the equivalent of what an international team of astronomers did by combining four of the most powerful telescopes in the world — the Very Large Telescopes at the European Southern Observatory in Chile — in a super-instrument called GRAVITY and directing it at the quasar 3C 273, which is about 2.5 billion light-years away from Earth in the constellation Virgo.

For the first time, the scientists were able to observe the motion of gas clouds swirling around the supermassive black hole at the center of the quasar. Doing so allowed them to measure the black hole’s mass with unprecedented precision.

“In terms of technology, this was a huge breakthrough,” said Bradley Peterson, professor emeritus of astronomy at Ohio State and a key collaborator on the GRAVITY study, which was released Nov. 29 in Nature. “I never thought this would happen in my lifetime.”

Zoom from an optical image of quasar 3C 273 to an artist’s impression of the surroundings of its central supermassive black hole. (Credit: L. Calçada/ESO)

Studying black holes in quasars — the extremely active centers of far-away galaxies that typically appear 10 times brighter than all the stars in the Milky Way combined — is key to understanding galaxy formation, as their evolution is intricately tied to galaxy growth, Peterson explained.

“There are supermassive black holes at the center of every large galaxy, but about one in 10 is accreting gas at a high enough rate that it develops a quasar,” added Peterson, who pioneered a widely used method to determine black hole masses in quasars called reverberation mapping. Until now, the technique has been the only way for astronomers to understand the physics occurring at the threshold of a quasar's black hole, which are too far away to directly image.

Whereas reverberation mapping relies on timing of brightness variations in the quasar to measure the gaseous zone immediately around the black hole (also known as the “broad line region”), the GRAVITY super-telescope characterized this region with just several observations. 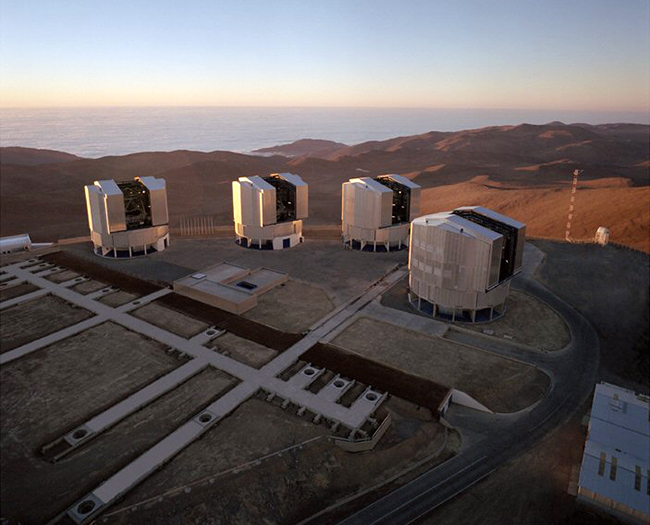 The Very Large Telescope array in the Atacama Desert of northern Chile. The telescopes can work together to form a giant 'interferometer' called GRAVITY, which allows astronomers to see details up to 25 times finer than with the individual telescopes.

“Our results support the fundamental assumptions of reverberation mapping,” said Jason Dexter, co-lead author and researcher at the Max Planck Institute for Extraterrestrial Physics (MPE) in Germany, which led the study. Both techniques estimate the black hole at the center of 3C 273 to be around 300 million solar masses.

While the new observation is groundbreaking, it could be challenging for GRAVITY to repeat the results for quasars that aren’t as big or luminous, Peterson said. “In this particular case, GRAVITY has an advantage on account of 3C 273's location in the sky.”

The powerful instrument, which uses infrared light and a technique called interferometry, is equivalent to a telescope 130 meters in diameter (the Hubble Space Telescope has a diameter of 2.4 meters). It was also recently used to get the closest look yet of the supermassive black hole at the center of the Milky Way.

“Black holes are intriguing objects, allowing us to probe physics under extreme conditions,” said Reinhard Genzel, head of the infrared research group at MPE. “And with GRAVITY we can now probe them both near and far.” 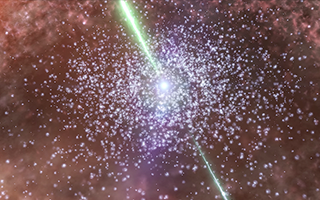