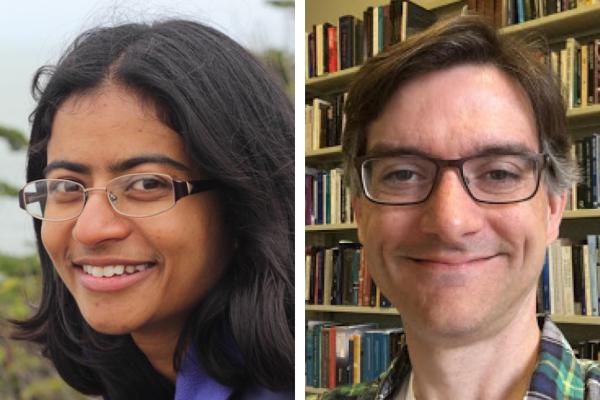 Dhar, whose areas of expertise include early modern English literature, Shakespeare and disability studies, was awarded a sum of $60,000 for her project, “John Milton’s Blind Language.” The manuscript examines Milton’s psalm translations as his blindness progressed and the influence his blindness had on his works, particularly his later sonnets and last great poems, Paradise Lost, Paradise Regained and Samson Agonistes.

“I am excited to take up this fellowship and hope that the College of Arts and Sciences at Ohio State will similarly and substantially support research, pedagogy and publicly engaged work across humanities disciplines and across our various campuses,” Dhar said.

Pincock’s scholarship focuses on the philosophies of mathematics and science and the history of analytic philosophy. He was awarded $60,000 for his project, “Scientific Explanation, Inference, and Realism,” which defends the view that current science provides knowledge of unobservable entities and events such as electrons and the Big Bang. The view demonstrates how the successes science has offered are sufficient evidence for the truth of much of our scientific conception of the world.

“I am grateful for the support I have received here at Ohio State, and I hope the College of Arts and Sciences will continue to support research and scholarship across the humanities,” Pincock said.

A total of $32.8 million in funding was awarded to 213 humanities projects at institutions across the U.S. These grants will go toward projects that range from safeguarding extensive collections on Appalachian history at Kentucky’s Appalshop archives, enabling production of an interactive timeline of African-American music at Carnegie Hall, and supporting the use of multispectral imaging and X-ray spectroscopy on archaeological objects to better understand color in the ancient world.

“As we conclude an extremely difficult year for our nation and its cultural institutions, it is heartening to see so many excellent projects being undertaken by humanities scholars, researchers, curators and educators,” said NEH Chairman Jon Parrish Peede. "These new NEH grants will foster intellectual inquiry, promote broad engagement with history, literature and other humanities fields, and expand access to cultural collections and resources for all Americans.”