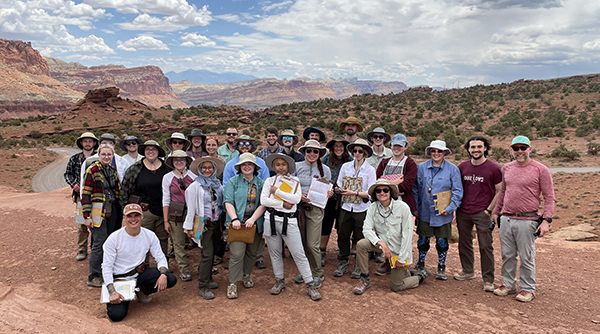 After the pandemic cancelled the Earth Sciences summer geology Field Camp to Utah in 2020, the School of Earth Sciences was able to make the experience happen in 2021.

Under the sweltering summer sun — hiking in a diverse, rugged landscape dotted with sagebrush, cacti and wildflowers throughout valleys that sit under towering, jagged rock formations — Ashley Griffith can’t help but eavesdrop.

He’s walking through Great Basin National Park, a secluded wilderness nestled between the Sierra Nevada and Wasatch Mountains that abuts the Nevada-Utah border. On the trail before him are two students discussing the surrounding rock and its place within the region’s ancient geological history.

“One of the students looked at the other and said, ‘I’m pretty sure I just learned more actually being here than I did back in class.’” Griffith said. “You have a lot of lightbulb moments like that. Some things are easier to learn when you’re there in the middle of it.”

Students have been sharing these moments for nearly 75 years in the School of Earth Sciences’ summer geology Field Camp, which whisks Ohio State students away to Utah for six weeks to learn, explore and apply their geology knowledge within the vast, rocky terrain of the Intermountain West.

Field camp students examine fossiliferous limestone layers within the Green River Formation that supplied building stone for the Manti Utah Temple, which was built over 130 years ago, seen in the background.

Field Camp ran for 72 summers between 1947 and 2019. That streak came to an end in 2020 when the COVID-19 pandemic forced people around the world to seek shelter inside their homes. Then, in May 2021 — as vaccination rates rose and coronavirus cases declined — Griffith and Millan got the green light to return to Utah. 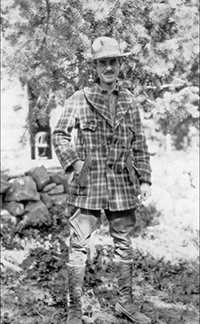 Griffith, an associate professor in the School of Earth Sciences, studies structural geology and geomechanics, and he has been Field Camp director since 2019. Alongside Earth sciences lecturer and Field Camp coordinator Cristina Millan, the two manage an educational endeavor that began in 1947 under the leadership of the late Edmund Spieker, professor emeritus of geology and mineralogy.

The pair stuffed six months of preparation and planning — securing necessities like lodging, transportation and food — into one hectic 30-day period.

The group embarked mid-June, arriving at their field station at Snow College in Ephraim, Utah, and encountering the rock record of geological events hundreds of millions of years old.

“All these aspects of geology, they actually see it here,” Millan said. “They see it in the field. They understand it. They see the scale of things. … It takes you completely out of your comfort zone in this small town in the middle of nowhere. It’s really transformative.” 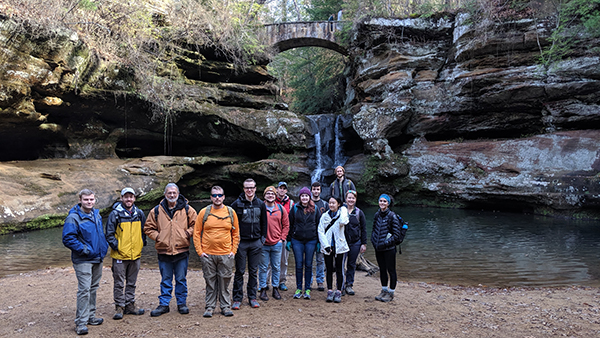 If Griffith and Millan are continuing Spieker’s fieldwork legacy, it’s fair to say Ian Howat is starting one of his own.

Howat, a professor and University Distinguished Scholar in the School of Earth Sciences, launched his graduate field seminar “Seminar in Glaciology and Geomorphology” in 2019. Like the Field Camp, Howat’s field experience was cancelled due to the pandemic, but it returns this fall. A glaciologist who studies the dynamics of glaciers and ice sheets, Howat leads his students to metro parks and state parks around Ohio where they examine the traces left behind by glaciers that covered the Buckeye State 20,000 years ago.

“Those retreated and left their markings, and it makes a nice natural laboratory for looking at how ice sculpts the landscape, how the landscape changes after the ice retreats and how humans are still being impacted by that ice age in the distant past,” said Howat, also the director of the Byrd Polar and Climate Research Center.

Between 95,000 and 20,000 years ago, the Laurentide Ice Sheet covered much of upper North America. It stretched down from Greenland and through Canada, carved out the Great Lakes, thinned out around the north and northeastern United States and ended near the Missouri and Ohio River valleys. As it pushed its way south, the massive ice sheet drove through Ohio’s river system, forcibly redirecting waterflow from north to south and forming what is now the Ohio River. 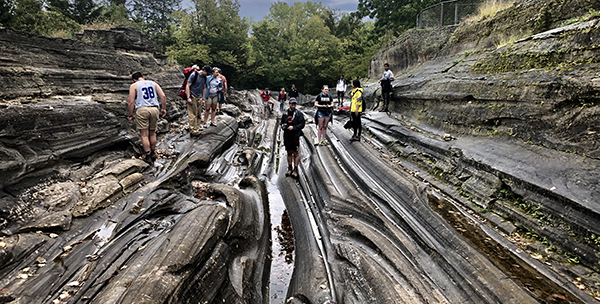 Students explore Kelleys Island's glacial grooves, which were left behind about 20,000 years ago when the Laurentide Ice Sheet that covered Ohio retreated.

When the ice sheet retreated, it did so quickly relative to its expansion, leaving behind valleys, moraines and glacial till, the evidence of which are seen and felt throughout Ohio. When drivers travel up State Route 315 and encounter a change in landscape north of Interstate 270, they’re driving into a moraine gouged out by the ice sheet. Ohio’s geologic history influenced the type of rock Columbus sits on; the city’s west side is over limestone, and the east side rests on shale. How each rock type erodes dictates traits of the Scioto and Olentangy Rivers, like how the Scioto cuts deeper into the earth while the wider Olentangy meanders.

These geological footprints are all over Ohio, and Howat’s class travels to locations like Blackhand Gorge, Clifton Gorge, Hocking Hills and Kelleys Island on Lake Erie to find them.

“It’s all tied into the underlying geology, which was determined hundreds of millions of years ago,” Howat said. “It’s different elements of Earth’s history coming together to influence how the landscape looks today and how we live on it.”

After hunkering down indoors, researchers and students are rediscovering the value of collaborating back outside, putting their boots on the ground and getting their hands dirty.

“It’s really a mix between a really intensive, field-research experience and the vacation of a lifetime,” Griffith said.

Being in the field, making the best of suboptimal situations, learning how to work together, those are all really important,” Howat said. “Not just in geology. It can be anything. It’s important we provide those opportunities to get out of the classroom and the lab to students at all levels.” 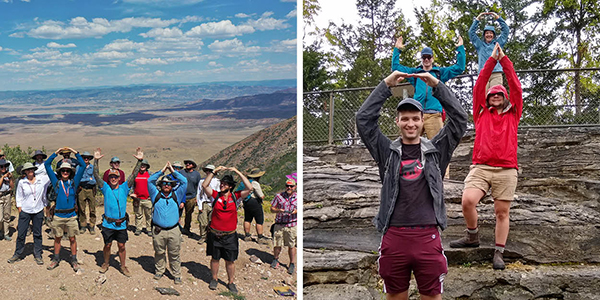 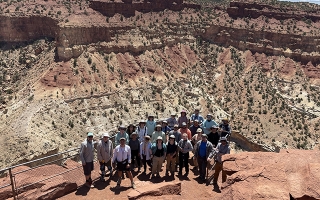