As Francesca Miller ’19 stands poised in front of a blank wall — her canvas — in downtown Columbus with marching and chanting and hurt all around her, she ponders what activist and musician Nina Simone said over a half century before.

“An artist’s duty, as far as I’m concerned, is to reflect the times.” 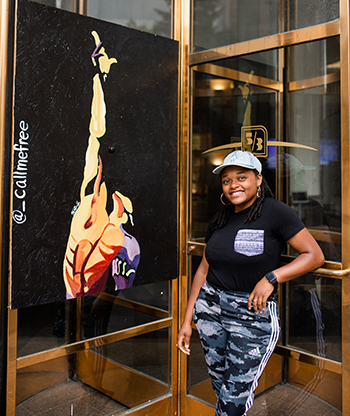 Reflect the times. In those times, it was 1968, the height of the civil rights era. This time, it’s June 2020, and cities across the nation are alive with protest in the wake of the violent killings of George Floyd, Breonna Taylor, Ahmaud Arbery and other Black people stolen by police brutality, systemic racism and white supremacy.

Standing on that sidewalk in front of the Ohio Theatre, Miller knows she’s meant to be there, slathering vibrant blues, purples and reds onto the wooden boards covering the building,

“An artist’s duty,” she thinks. So she paints.

“There was all the frustration, the anger, the pain, all of these things, all of these emotions are high,” she said. “We’re just tired and exhausted with all the oppression, brutality and trauma. I just felt like this was an opportunity for me to help create art that spoke to us — people of color — that reflected how there’s more to our story beyond that trauma, pain and oppression. That we are people of joy. We are people of beauty, of dignity.”

Francesca Miller paints a mural onto plywood covering the Ohio Theatre in downtown Columbus in June 2020.

An art education alumna, Miller has always made the connections between art, the influential power it wields and the visceral emotion it elicits. She calls on that experience everywhere she turns — as a visual arts instructor at the Lincoln Theatre. Or when she joined the #ArtUnitesCbus public arts initiative to create murals during the protests. Or when she was commissioned by Abercrombie & Fitch to design apparel for its "For Justice" collection. Or when a collaboration between the Franklinton Arts District and Land-Grant Brewing Company led to her work appearing on Land-Grant beer cans to promote the Franklinton Fridays Music Series. Walk around Columbus long enough and you’ve likely seen a Francesca Miller original and felt its purpose.

“I’ve always known that I wanted my art to be meaningful, to make an impact,” she said.

It started as a small child, when Miller drew the cartoon characters from her backpack so well her family thought they were tracings. When she was 6 years old, she would take her stack of drawings up and down her street, selling them for a quarter apiece. She spent every summer in arts camp at the King Arts Complex, where working with art educators and learning about Columbus’ diverse arts scene solidified her passion.

At Ohio State, Miller settled on art education, remembering the impact mentors and teachers had on her growing up.

“I just remember how exciting that was for me, and I always felt like that was family in any type of community environment where the arts were involved,” she said. “I wanted to help create that space for other young people as well.”

Miller graduated with her BA in art education in 2019, began work at the Lincoln Theatre and started painting commissioned murals around Columbus. A year later as Columbus citizens began rallying to demonstrate against police brutality and racism, Miller felt called to contribute the best way she knew how.

The Greater Columbus Arts Council (GCAC) partnered with the Columbus Association for Performing Arts (CAPA) to launch #ArtUnitesCbus, an initiative that connected local artists with businesses and resulted in more than 200 murals created throughout the city. Miller quickly unified with the collection of artists downtown where her vivid artwork joined the chorus crying out that Black lives matter.

“I felt like a medic in those moments,” she said. “We are human beings. We are worthy of love. Our lives matter.”

Images of Miller’s pieces downtown circulated online, eventually catching the attention of Abercrombie & Fitch. The apparel company was launching a collection focused on equity and justice, and they asked Miller to be the first outside visual artist to work with them.

Francesca Miller wearing one of the T-shirts she designed for Abercrombie & Fitch's "For Justice" collection.

She designed graphics for three T-shirts, each portraying a different representation of Black joy, unity and harmony. Soon after her work with Abercrombie & Fitch ended, Miller collaborated with Franklinton Arts District and Land-Grant Brewing to design a poster and beer label for the Franklinton Friday Music Series.

Through each commissioned piece, Miller doesn’t compromise her authenticity. Each is genuine, a reflection of how her experiences have shaped the artist she is today. With every blank canvas she faces, Miller believes it’s her duty to continue reflecting the times.

Everybody has their methods,” she said. “This is us. This is artists. These are our methods. This is our voice. … We may not speak the same language, but we can look at the same image and have the same emotion evoked in us. I think that’s one of the most powerful aspects of using art to help contribute to this cause.” 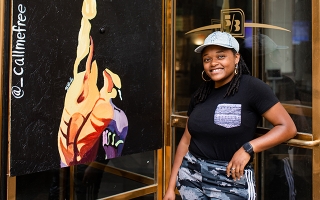