The idea of community has always been a guiding principle for Christopher Carver (BA, geography, 1999). As a child, he would mark a path through the streets of downtown Columbus, exploring the communities of his hometown. After high school, searching for new experiences in a warmer climate, Carver moved to Florida to attend college. Less than two years later, he was ready to return to Columbus to pursue the connection he’d felt to Ohio State since childhood.

After enrolling at Ohio State, Carver turned his attention to what he calls the “eternal undergraduate challenge” — choosing a major.

As part of his process, Carver signed up for one class in each area that interested him. After classes in writing, philosophy and aviation, Carver finally found his calling in a course on political geography.

“Taking that class literally changed my life,” he said. “It connected the idea of place and maps — which I’d always been interested in — with the idea of community and people. It opened up a passion in me that I still interweave in my professional life.”

“Being able to interact with so many different people from so many different backgrounds creates an unbelievably fertile ground where, if you leverage it for what it can be, you’ll never be the same again,” Carver said.

From campus to New York City

After graduating from Ohio State, Carver was eager to move to New York City. He took the New York City fire alarm dispatcher’s exam and, after placing well, was offered a job. By the time Carver took early retirement in 2015, he had worked his way up to director of fire dispatch, which meant he was responsible for ensuring effective fire service communication for the entire city.

Carver is now the director of 9-1-1 and PSAP (Public Safety Answering Point) Operations at the National Emergency Number Association — the national nonprofit organization that guides how 911 operates around the country.

Carver explained that his degree in geography has had countless applications to his career in public safety.

“My academic program at Ohio State made my experience at the New York City Fire Department so much richer,” Carver said. “I was able to connect the idea of public safety and the public safety needs of a community back to the things I learned at Ohio State.”

Carver said one event that brought these applications into focus was Superstorm Sandy in 2012. During the storm, Carver and his team were unable to track what neighborhoods were flooded in real time.

“That wasn’t just an annoying public safety problem,” he explained. “That was a GIS problem, which completely related to what I learned at Ohio State.”

Carver also noticed later that the neighborhoods most affected by the storm were the most socioeconomically depressed areas of the city.

“In this case, you have a disaster of human proportion that is also related to factors of political and economic geography which were barely known to the people that lived there, but were incredibly relevant to the reality of managing a public safety disaster,” Carver said.

This “big-picture” approach to solving problems is something Carver says he learned in the Department of Geography.

“Geography allows you to grasp the building blocks of how our society is organized today, as well as envision potential solutions,” Carver said. “I am proud to say that not a single day goes by in my professional career that I don’t use what I learned not just once, but 10 times.”

Carver also credits Ohio State with instilling in him the importance of giving back.

“No matter where you are in your journey, it’s important you look for opportunities to help others,” he said. “This was a key component of my time in New York that was a reflection of what I learned at Ohio State.”

One way Carver gives back is by speaking about his experience during 9/11. As he recounts his story from that day to communities around central Ohio, Carver always tries to keep his message about unity and the triumphs he witnessed as people came together to save lives.

“9/11 should never be a divisive issue us-versus-them issue,” Carver said. “The people who went to work that day, without even being asked, not one of them said ‘Who are we helping? What color is their skin?’ That doesn’t matter in a public safety environment. And, it didn’t matter to the firefighters who went to that scene and rescued 20,000 people.”

Carver says he keeps the unofficial title to his talk — ‘I’ve Seen Miracles’ — in mind as he shares his story.

“What those terrorists tried to do that day is tear down the fabric of our humanity, and a whole bunch of people instantaneously built it back up,” Carver said. “That story demands to be told.”

On the 17th anniversary of 9/11, @OSUGeography alum Chris Carver reflects on his career in public safety. #ASCDaily 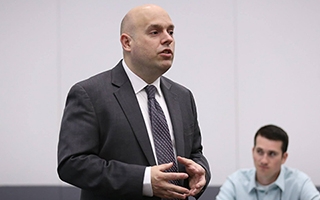