When Dani Blumenfeld, a junior marketing student in the Fisher College of Business, took over as co-president of German Club last year, she faced the unexpected challenge of figuring out how to maintain a student organization despite Zoom fatigue and added stress. In this conversation, Blumenfeld shares how she has adapted the club to meet the needs of students, how German Club has enhanced her college experience and why she originally decided to minor in the language.

How long have you been involved with German Club, and how has it helped shape your college experience?

I started coming freshman year, which was a really hard year for me, but German Club was a space where I could meet new people, not even necessarily to become best friends with them, but to have a community that I could go to and get separation from other parts of my life.

Then sophomore year I became good friends with the president. I kept going to go see her, and I made a lot of friends through that. Being in a huge university was hard for me because I came from a small school, so it's just a community that I can go to and feel comfortable to be myself.

This club has meant a lot to me because my grandma actually comes from what was the Czech Republic, though now it’s a part of Germany. She speaks German and grew up there. I wanted to get in touch with her culture; that's what led me to study German and become a part of this club.

What are some things German Club typically does in an ordinary year?

We usually have two meetings a week. On Mondays, we usually have something called Stammtisch where we meet in Crane Cafe and basically speak German the entire time. That was our more serious meeting, but it wasn't that serious. We just talked about whatever.

Then on Fridays, we would do Kaffeestunde at the German house. There's snacks and tea, hot cocoa, coffee, and that was a little less serious. The German TAs would come, you could speak German, you could speak English — it didn't really matter. Then once a month, we would go to a German-style restaurant as a club.

German Club members at a Taste of OSU event before the pandemic.

When you found out that you were going to be the president of the club this year in the middle of a pandemic, what were you thinking about to try to keep it going?

I was scared, and I didn’t know how to keep people coming to our meetings. Luckily, we talked it all out and my other officers are really helpful. 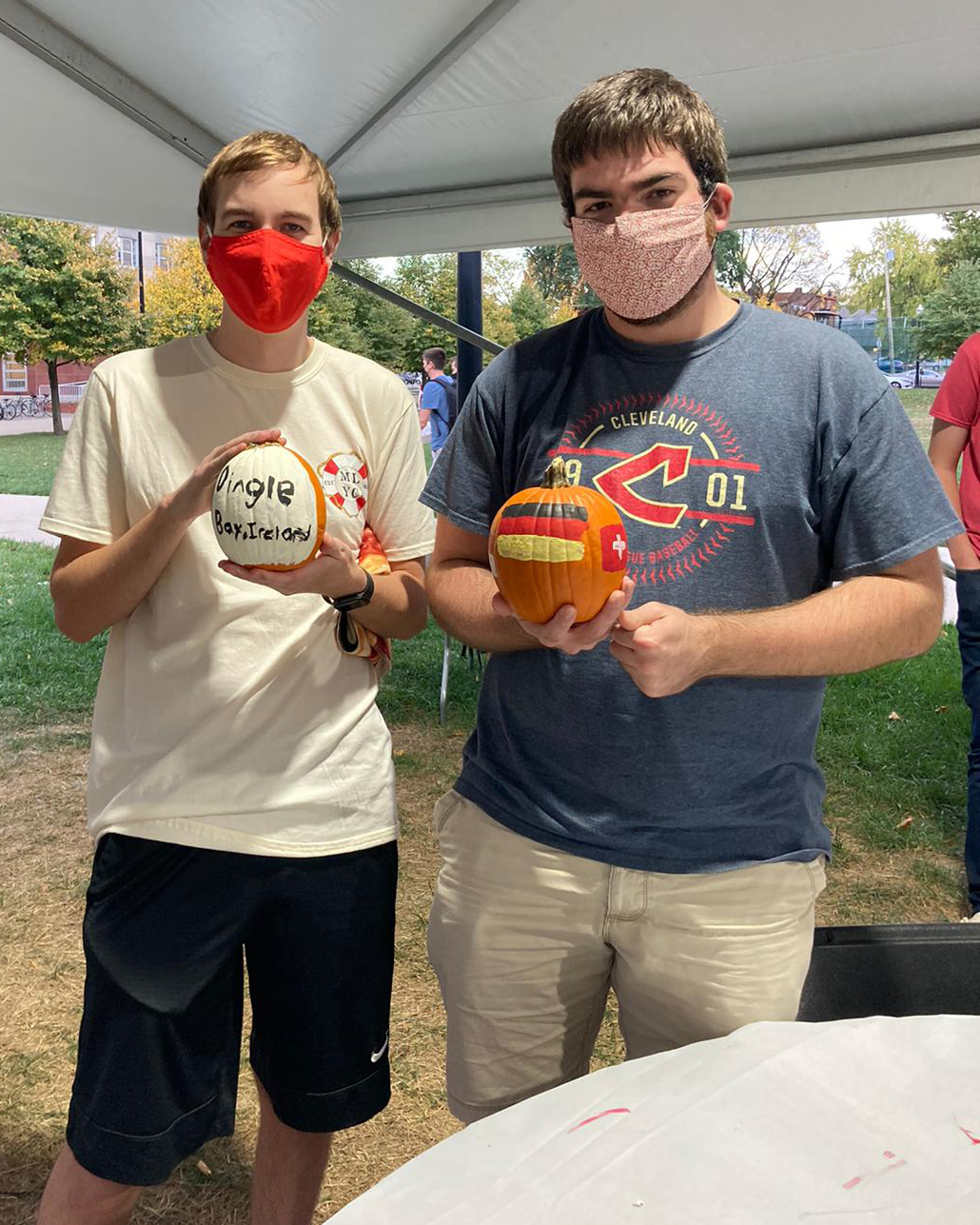 German Club members hold pumpkins they painted at a Halloween-themed meeting this fall.

Virtual Stammtisch has actually been really good for people since it’s kind of like tutoring. We also do tutoring over Zoom every week, so we're going to keep doing that this semester. We did get to do one in person meeting. It was Halloween-themed because it was in October. We decided to do one Kaffeestunde a month, just so it wasn't too much, and that was one of them. Everyone dressed up, and we painted pumpkins.

We're also trying to incorporate things we didn't do last year. We'll have a professor of the month come in and give a talk about whatever they want. I definitely want to continue that this semester to keep the professors involved. I think people love to hear professors talk about their research, where they come from, things like that.

One of my other officers, Zane Patterson, suggested we should do a mental health meeting because the year’s been rough, so we did that last semester, too.

What were you all working on for the holidays?

We did a German-themed winter basket that you can gift other people for the holidays. It helped keep people involved, and we got quite a few people to buy baskets, which was cool. We bought candy bars, gingersnap cookies, chocolate bars, gingerbread cookies covered in dark chocolate and Kartoffel salad, which is just potato salad. We didn't make a lot of money off of it, but we didn't care. It's just something fun.

Find a full list of Arts and Sciences student organizations on artsandsciences.osu.edu.