Giving Pediatric Cancer Patients an Inside Look Into TBDBITL

At the start of its season, the Ohio State Marching Band again came together with Nellie’s Champions for Kids to give pediatric cancer patients and their families a memorable evening packed with fun activities, music and Buckeye pride.

The organization started from a solitary fashion show and has grown to raise over $2 million to fight childhood cancer through a wide variety of events, including a night with TBDBITL.

On the night of the Aug. 29 event, NC4K patients and families filled Ohio Stadium to get an inside look of what it’s like to be a member of the Ohio State Marching Band. The band invited the NC4K guests to the field to meet students in different sections before they joined the band students in marching a very special performance of Script Ohio. The band also performed a preview of its songs for the 2016 football season.

“The Ohio State Marching Band students and staff have been nothing but kind to our organization and families,” said Nellie Corriveau, founder and executive director of NC4K. “They share their love for music with the kids and create so many smiles and memories to last a lifetime. Our families tell us year round that they look forward to this event and we are never allowed to get rid of it. We are grateful for the friendship and compassion the Ohio State Marching Band has shown.”

Third-year mellophone player Sarah Zonders said that although the band members only spend a short time with the children, it clearly makes their day a little brighter.

“The most rewarding aspect of this event is knowing that we made a difference in the lives of people who are going through a time of fear and hardship,” Zonders, a music education major, said. “I feel so honored that I get to be a part of their lives in a small way.”

This year’s event marks the third time that the Marching Band has given children and their families a taste of what it’s like to be a Buckeye. Since the partnership between the band and NC4K began in 2014, the two groups have collaboratively hosted annual events on Ohio State’s campus.

Although the relationship has only been in place for a handful of years, third-year sousaphone player Mitch Kahn said that the effect it’s had is beyond words.

“(The event) has an impact that families probably cannot express, and honestly, I can't either,” Kahn, a biomedical engineering major, said.

The Marching Band will continue to partner with NC4K to provide children and their families with future events full of fun and Ohio State spirit. 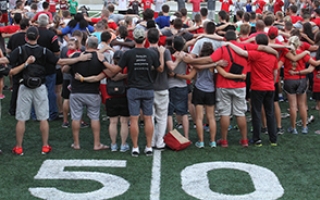