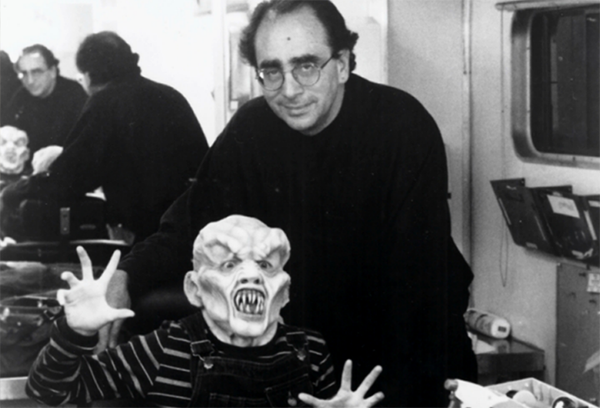 R.L. Stine on the set of "Goosebumps." Photo courtesy rlstine.com.

R.L. Stine spent a good portion of the pandemic doing what a lot of people did — staying inside writing and adopting a dog (whom he and his wife, Jane, called Lucky). 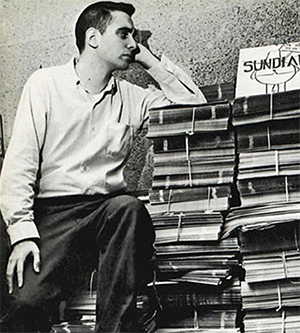 Stine came to Ohio State in the 1960s to study English, eventually earning his bachelor’s degree. As a freshman, he begged to join The Sundial, the university’s humor magazine. By his sophomore year, he was the editor, a title he kept until graduating in 1965. Proceeds from Sundial sales helped Stine pursue his dream of writing for a humor magazine in New York City.

R.L. Stine stands among stacks of copies of The Sundial as a student at Ohio State. Photo courtesy rlstine.com.

On the other hand, “Bob,” as he is called, is very much unlike anyone else. Not everyone is a famous children’s horror author who instilled a love of reading to a generation, won three Emmy Awards, sold more than 400 million books, was portrayed by Jack Black on the big screen and inspired an attraction at Disney World (Goosebumps HorrorLand Fright Show, one of the “biggest thrills” of his life). There’s little Stine has not experienced or accomplished since growing up in Bexley, Ohio, and graduating from The Ohio State University more than 50 years ago.

The College of Arts and Sciences recently had the opportunity to catch up with Stine — just after the release of “Fear Street” on Netflix and ahead of the release of “Just Beyond” on Disney+.

View the trailers for the Netflix series "Fear Street" and the Disney+ series "Just Beyond."

How was your summer? What’s been keeping you busy?

I’ve been working. I’ve just felt lucky through the whole pandemic that I’ve had so many books to write. My work is like normal life. I write in the morning, and those are the best hours of my day. I think for a lot of writers, being stuck inside is not a major lifestyle change. I’m used to being home all day and working. I have Goosebumps to write, a new book series and other projects. And next year is the 30th anniversary of Goosebumps. How did that happen? Thirty years of this stuff. I’m amazed!

Were your expectations for Goosebumps this high when you started writing it 30 years ago?

No, of course not. And the sad fact is that I didn’t want to do Goosebumps. That’s the kind of businessman I am. I was doing the Fear Street series for teens and it was doing very well. Then my editors said to me, “You know, no one has ever done a horror series for 7- to 12-year-olds before.”

And I said no because I was afraid it would mess up Fear Street! They kept after me, and finally, I said I’d try doing two or three books if we could think of a good name for the series. And here we are 30 years later.

R.L. Stine tells the story of how he came up with the name for his children's horror series, Goosebumps.

How has your writing process changed over time?

Well, I got slower. Listen, somehow, back in the 1990s, I wrote a Goosebumps book and a Fear Street book every month — I wrote two novels a month! How did I ever do that? I didn’t get out much, I can tell you that. At that point, though, I had been writing for about 20 years and nobody had noticed. I think having that kind of success was so exhilarating that it just kept me going, and I could write 20 pages a day and do a novel every two weeks.

How did you come up with your ideas for the stories?

Who knows? Luckily, whenever I needed one, I had one. I’ve done maybe 150 Goosebumps, and there are only six plots in them, but so far, no one’s noticed.

R.L. Stine on how Goosebumps became popular thanks to word-of-mouth among schoolchildren.

What has it been like taking these stories (Fear Street and Goosebumps) from book to screen? How involved are you?

I’m not involved too much — no one wants the author around; they just want to do their own thing. But I do think the movies and television shows capture the spirit of the books.

Was it difficult to give up some creative control initially, or did you understand that it was part of the process?

Not at all. Since the beginning I enjoyed it. Back in the ’90s, I was writing two books a month, so I couldn’t spend time on the “Goosebumps” television series. And I have to say, it’s really fun to see what other writers do with the stories. They take my story and go off in their own directions, and I enjoy that. Have you seen the “Goosebumps” movies with Jack Black playing me? I had no input on those films either — I did get them to take out a few Stephen King jokes, but that was about all I did. And I’m so lucky because those movies were really good. And Jack and I had a great time.

Speaking of jokes, you started out as a humor writer, correct?

Yes, that’s all I cared about and all I did at Ohio State. In those days, every college had a humor magazine. The Sundial had been around at Ohio State for over 100 years. James Thurber was one of the early editors of the magazine. One of the first things I did as a freshman was ask if I could write for them, and I was editor of The Sundial for three years. I never went to class, I just put out this magazine and learned how to do a magazine and wrote and had a great time. I called myself “Jovial Bob” to make myself a personality and help sell magazines because at the time, the editor of The Sundial got 23% of the profits. It actually paid my way to New York City after I graduated.

R.L. Stine with an anecdote about the time he ran for undergraduate student government president his senior year at Ohio State.

Before you graduated and moved to New York, did you feel like you gained professional experience working with The Sundial?

I learned the most from doing the magazine because I’d already been writing since I was 9. I was this weird kid that already knew what he wanted to do. I sat in my room typing all day — how strange, right? So, I think doing the magazine was the most valuable to me because I then had my own humor magazine in New York.

And you now have a creative writing scholarship in the College of Arts and Sciences?

I do. It’s a nice thing, I have this scholarship called the R.L. Stine Scholarship where I pay a different creative writing student’s tuition every year. It’s nice, and I get to know them a little bit and try to meet each one while they’re in school whenever I visit Ohio State.

Does that make you think about the impact you’ve had on people?

If you want me to be serious for a minute, I will say that the thing I’m most proud of is the millions of kids who learned to read on my books and who learned to like books because of me. What a wonderful thing. I don’t think about that when I’m sitting here in the room writing these little stories.

That’s why I love Twitter — it’s so good for my ego. On Twitter, I hear from my original readers back from the 1990s and they’re all so wonderful! I’m so glad I’ve lived long enough that I can hear from all these people. They send such wonderful notes, and it makes me feel great.

What’s next for you?

I probably shouldn’t say this because it hasn’t been announced yet, but I’m starting a new book series called Stinetinglers. It’s a short story book. I just finished the first one, and it’s got 10 brand-new short stories. It’s for the same audience as Goosebumps. 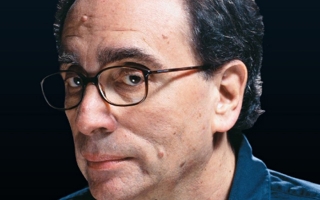