The question on the table is: What if testing yourself for cancer or other diseases were as easy as testing your blood sugar or taking a home pregnancy test?

“In a few years, it could be," said Abraham Badu-Tawiah (Badu), assistant professor of chemistry and biochemistry, who developed a new, low-cost, proof-of-concept paper strip that can reveal the presence of malaria or cancer antigen in the blood.

“People could apply a drop of blood on a paper strip, at home, mail it to a laboratory on a regular basis — and see a doctor only if the test is positive.”

Badu’s lab is a dynamic mix of postdocs, graduate and undergraduate students, visiting scholars and even high-school students. Proud of the energy, enthusiasm and dedication of his team, Badu says, “Everyone is listened to, everyone contributes and we all learn from one another.”

This past May, a five-year, $150,000/year Early Career Award from the Department of Energy put him in an elite group of the nation’s top young energy researchers positioned to solve critical global-energy problems.

In June, Badu published “Mass Spectrometry for Paper-Based Immunoassays: Toward On-Demand Diagnosis,” in the Journal of the American Chemical Society.

Since then, this ground-breaking innovation has been featured in U.S. News & World Report, Huffington Post and the BBC – just to name a few.

Before the Groundbreaking Research: A Hard, Steep Road

Badu grew up in Ghana, in the very small village of Kumasi, whose nearest “town,” Akropong, was about 10 miles away. School here was not a way of life.

“I didn’t go to school when I was little — but I realized early on my best chance for success was school,” Badu said.

“But, I was lucky when a teacher came to live in our house; he tricked me into going to school by giving me books to carry for him!”

And, once there, he stayed.

In college, Badu majored in chemistry. “But, it wasn’t until Harvard that I realized chemistry could be used like biology — and a lot could be done. It opened up a whole new path — although it took me two years to figure it out.”

“In Africa, malaria is so common that whenever you get feverish, the first thing you think is, ‘Oh, it’s probably malaria.’” Badu, who considers himself lucky, says, “I can’t put a number on how many times I had it.

“We want to empower people to take charge of their health. If you care about your health and you have reason to worry about a condition, then you don’t want to wait until you get sick to go to the hospital. This will let you test yourself as often as you want.”

Badu believes these strips are an affordable way to put malaria diagnoses into the hands of people in rural Africa and Southeast Asia, where the disease kills hundreds of thousands of people and infects hundreds of millions every year.

The strips start out as sheets of plain white paper stuck together with two-sided adhesive tape after they are run through a regular ink-jet printer. Wax is used to trace channel and reservoir outlines on the paper, which the wax then penetrates, forming a waterproof barrier that captures and keeps the blood sample safe between layers. The paper contains small, synthetic chemical probes that carry a positive charge, allowing ultra-sensitive detection by a handheld mass spectrometer.

One 8.5-by-11-inch sheet of paper can hold dozens of individual tests, which are cut apart with a paper cutter. The result: test strips roughly the size of a postage-stamp.

“Enzymes are picky,” Badu points out. “They have to be kept at just the right temperature and they can’t be stored dry or exposed to light. But the ionic probes are hardy. They are not affected by light, temperature, humidity — even Africa’s heat can’t do anything to them. So you can a send a strip to a hospital knowing it will be readable when it gets there.”

After confirming the tests worked, Badu’s team stored the strips, re-testing every few days to see if the signal detected by the mass spectrometer would fade with time. It did not. It was as strong on day 30 day as day one, indicating stability, detectability and viability for people living in remote areas around the world.

Plus, the test could potentially be tailored to detect any disease for which the human body produces antibodies, including ovarian cancer and cancer of the large intestine.

Ohio State will license the technology to a medical diagnostics company for further development, and Badu hopes to be able to test the strips in a clinical setting within three years. In the meantime, he and his colleagues are stepping up efforts to make the tests more sensitive and less invasive, investigating how to make them work with saliva or urine as test material, rather than blood. 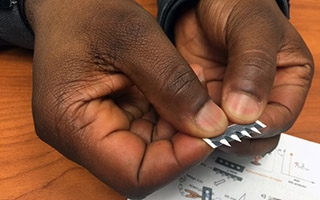