L.J. Houdyshell (MFA, Theatre, 1990) recently won the Emmy Award for Outstanding Production Design For A Narrative Program (Half-Hour Or Less) for her work on the HBO show Silicon Valley. As art director, Houdyshell collaborated with all creative departments on the show (i.e. construction, paint, set decoration, camera, special effects) to create sets on time and on budget. She recently accepted the job as production designer for the CBS drama Code Black.

What are your responsibilities as art director for Silicon Valley?

On the most basic level art directors make sure everyone has what they need to fulfill the Production Designers vision. So on a daily basis I communicate with members of the design team and department heads asking if they have what they need. Do they need research, concept drawings, plans, paint colors, a logo for a costume, a backing, a helicopter? All of the answers get fed from the production designer to the crew via the art director.

Do they need research, concept drawings, plans, paint colors, a logo for a costume, a backing, a helicopter?

How did it feel to win the Emmy?

Pretty fabulous! This award came at a time when I had just stepped into the position of production designer on the new CBS drama Code Black.  Knowing that I was parting company with the tremendously close-knit and dedicated team that created the world of Silicon Valley on such a high note was very satisfying.

The design team on Silicon Valley gets these amazing scripts. Every week we read them and laugh out loud. And then try not to cry when we figure out how we are going pull off another great episode. Seven capitol venture companies? Check. An entire energy drink warehouse and ad campaign? Check. Robotics Lab, Potato Cannon, Condor Nest, Burning House, Giants Stadium? Yes. We can do that. It is great fun to see how the sets enhance the comedy.

Do you have any advice for students entering the “real world”?

Hard work sets successful people apart from talented people. The level of skill sets required to get even an entry level position in film and television was daunting. Mastering the skills just puts you in line with everyone else. What you really need to be is a closer. Someone who will step in, think outside the box and deliver.

What you really need to be is a closer. Someone who will step in, think outside the box and deliver.

Because film and television are such a collaborative field you have to find ways to use your talents to complement all of the other members of the team. On a daily basis my job entails asking highly skilled, creative people to do difficult tasks at breakneck speed in a constantly changing environment. I work hard to create opportunities and an environment for them to exceed beyond their expectations. That’s the payoff. When you pull them behind the camera and say, “Look what you’ve done now!”

How did your education at Ohio State help you to get where you are today?

The greatest strength of the program at Ohio State was that by design the curriculum was not geared to specialization and it encouraged collaboration. As graduate designers in the Department of Theatre we were expected to learn lighting design, set design, costume design and stage direction.

The entire faculty gave us all a great example of how to collaborate, give and take constructive criticism. At the time I felt it was really brutal to stand up in front of your classmates and have your work criticized. I dreaded each review of my work and the talk-backs after each performance. Agony. But that process forces you to be specific in your design choices because they have to stand up under scrutiny. Taking and giving feedback in a positive manner often leads to a new perspective you may have not considered. 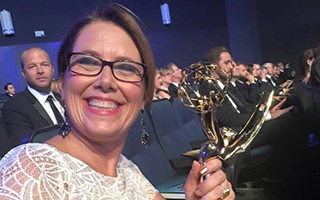