The College of Arts and Sciences sadly reports that Jon Woods, professor emeritus in the School of Music and long-time director of The Ohio State University Marching Band, passed away on Saturday, Sept. 12. Dr. Woods served as director of the Marching Band for 28 years, and had served as associate director for 10 years prior to that. He retired after the 2011-2012 academic year.

Recognized nationally as a clinician and adjudicator for marching, jazz and concert bands, Dr. Woods served as principal field conductor, show designer and administrator with the Marching Band. He also was administrator for all of the athletic bands and was principle conductor for the men’s basketball band. Throughout the years, he directed bands in 35 bowl games, three U.S. presidential inaugural parades and NCAA tournaments for men’s and women’s basketball. He also was chairman for the Big Ten Marching Band Directors Committee.

In the School of Music, he taught graduate music courses for master’s and doctoral students. At the undergraduate level, he taught secondary instrumental methods, marching band techniques and supervised instrumental student teachers. He is the co-author of The Marching Band Program: Principles and Practices.

We will provide information about funeral services as it becomes available. 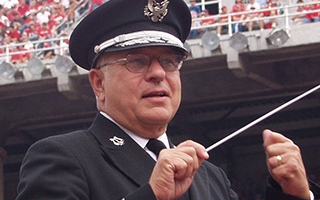