The Ohio State University mourns the loss of world-renowned artist, long-time faculty member and pioneer of digital art Charles “Chuck” Csuri, who passed peacefully in Lakewood Ranch, Florida, on Sunday, February 27, at the age of 99. Csuri is remembered as a true renaissance man whose lifetime of achievement epitomized the American Dream.

A graduate and professor of art education and computer and information science at The Ohio State University for over 40 years, Csuri formed the Advanced Computing Center for the Arts and Design (ACCAD) and co-founded the Ohio Supercomputer Center and Cranston/Csuri Productions, one of the first computer animation companies in the world. 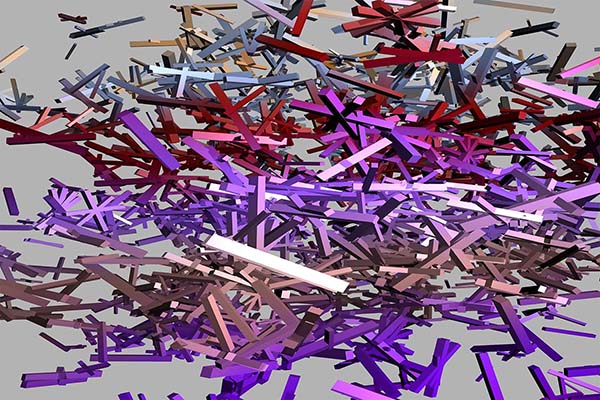 Charles Csuri was a lifelong creator of art, from his undergraduate days at Ohio State to this piece he completed just one month ago.

Dubbed the “father of computer art” by Smithsonian, Csuri led the development of code to enable artists to produce art in new ways on computers. His early work in computer plotter drawings, computer animation and 3D imagery secured his spot as a pioneer in combining art with technology.

“Professor Csuri was a pillar in the Ohio State community and truly epitomized the Greatest Generation,” said President Kristina M. Johnson. “From his time as a football captain and national champion to his groundbreaking work as a professor, he exemplified the Buckeye spirit of innovation and excellence. I admired him greatly. He led an incredibly full life, and his prolific accomplishments have been, and will continue to be, a source of endless inspiration for inventors, artists and leaders around the world.”

The results of Csuri’s groundbreaking work have been applied to flight simulators, computer-aided design, visualization of scientific phenomena, magnetic resonance imaging, education for the deaf, architecture and special effects for television and films. Csuri’s works are on display in the Museum of Modern Art, the Victoria and Albert Museum and the Zagreb Museum of Contemporary Art and are included in the personal collections of noted artists Roy Lichtenstein and George Segal.

“The College of Arts and Sciences joins in celebrating the remarkable life of Chuck Csuri,” said David Horn, the interim executive dean of the College of Arts and Sciences. “His pioneering research established ACCAD as a national leader in integrating art, design and technology, and made career-defining experiences possible for generations of faculty and students. The communities in which he worked will miss his creative spark.”

Csuri was born on July 4, 1922, in West Virginia to Hungarian immigrant parents. He attended Ohio State, where he was a three-year letterman for the Buckeye football program and played on the school’s first national championship team in 1942. Coached by the legendary Paul Brown — who called him “the perfect tackle” — Csuri led the 1942 Buckeyes to a 9-1 record, a Big Ten Conference championship and a No. 1 ranking in the final Associated Press poll. For his efforts, Csuri was named an All-American and the team’s Most Valuable Player. A team captain on the 1943 team, Csuri was selected in the 1944 NFL Draft by the Chicago Cardinals, but he declined in order to serve his country in World War II. 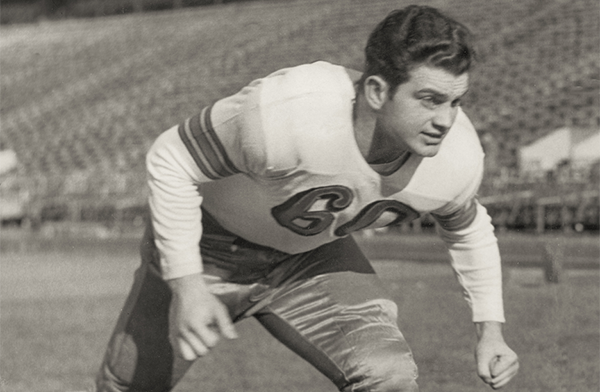 Csuri served in the U.S. Army from 1943-46, fighting in the Battle of the Bulge in 1944 and receiving a Bronze Star for heroism. His time in the Army later inspired one of his early digital artistic works, “Random War” (1967), which commented on the randomness of loss and death during military actions. Despite his deep devotion to serving his country, Csuri later in life spoke to the power of peace, unity and worldview. During his service, Csuri earned a certificate in engineering from the Newark College of Engineering in 1945. Following his Army service, he returned to Ohio State to obtain his master’s degree in fine arts.

In the late 1960s, Csuri used a grant from the National Science Foundation to form the Computer Graphics Research Group (CGRG) at Ohio State, which pioneered computer-based art and animation. Csuri’s daughter, Caroline, remembers him saying that the grant “sent shockwaves through the university. People thought I was crazy as an artist to be working with computers.”

Csuri’s excitement was in realizing his vision by collaborating with students and faculty from multiple disciplines, and his work helped make Columbus the birthplace of computer animation — even catching the attention of famous animator Chuck Jones, who came to dinner at the Csuris’ house to see what they were doing, Caroline said.

In 1987, Csuri founded the CGRG’s successor, the Advanced Computing Center for the Arts and Design, which provided the latest computer animation resources in teaching, research and production. ACCAD alumni have gone on to work in some of the top companies in the industry, including Pixar Animation Studios, Walt Disney Animation Studios and Industrial Light and Magic.

“Professor Csuri was a visionary. His work placed Ohio State at the center of the development of the field of computer graphics. He created unimaginable opportunities and experiences in the field for his students,” said Maria Palazzi, professor of design and director of ACCAD. “Most impressively, Chuck conceived of and created a truly collaborative and multidisciplinary approach to making computer graphics, centering the artist alongside the scientist. This is the community he built for his students at CGRG and later at ACCAD, and that they have taken out into the world.”

Csuri’s vision of aligning art with technology, each informing the other, remains a model for the kind of transdisciplinary work that is at the heart of the arts at Ohio State. From the work created at ACCAD to the collaborative projects done at the Wexner Center for the Arts between residency recipients and Ohio State faculty in areas like astronomy and engineering, Csuri’s legacy lives on.

His life was filled with achievement that canvassed athletics, the military, academics and art. But the remarks of curators of global museums, professional colleagues and his students over the course of 80 years marked his generosity, humor, curiosity and humanity as a remarkable husband, father, teacher and friend.

He met and married his wife, artist Lee Csuri, in the 1950s. They were married for 70 years and had two children, Steven and Caroline. Csuri is preceded in death by Steven (2018) and Lee (2019) but leaves behind Caroline and granddaughters Hannah and Emily Reagh.

Condolences can be sent through the Charles Csuri website and on Instagram. Donations and gifts are requested to be directed to the Special Olympics, one of Csuri’s favorite charities.