Adriana Dawes, assistant professor of mathematics and molecular genetics, has received the top award given by the National Science Foundation (NSF) in support the work of the nation’s most promising junior researchers. Her selection recognizes her exceptional research, teaching excellence and commitment to integrating teaching with research.

Dawes develops stochastic and deterministic models to better understand how biochemical and mechanical factors in the cell interact and regulate each other for proper cell function. Dawes also has a wet lab where data can be generated to directly validate and challenge the mathematical models.

She develops and analyzes mathematical models of cell dynamics, investigating how proteins move around within a cell and communicate with neighboring cells.

Dawes’ new, five-year, $447,447 NSF CAREER Award for “Multiscale investigation of cortical actin organization and dynamics,” will fund further research on actin. Required for critical cell processes, such as wound healing and cell division, actin is a protein that interacts across multiple time and space scales to give rise to cell-level functional structures.

“In this project,” she said, “we will use stochastic and continuum mathematical models to investigate the dynamics and organization of actin structures. We will rigorously explore the link between microscale processes and emergent macroscale patterns to yield key insights into the role of actin in normal and in misregulated cells.”

The NSF CAREER Award funds an educational outreach component, which Dawes intends to use to develop and teach an undergraduate course in mathematical modeling accessible to all levels of math students.

“The purpose of the course,” Dawes said, “is to prepare students to compete in COMAP's annual Mathematical Contest in Modeling, an international competition that uses mathematical tools to solve real-world problems.” 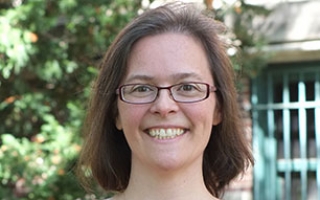