I write to inform you that today, Gretchen Ritter, vice provost and executive dean of the College of Arts and Sciences, has been named the next vice chancellor, provost and chief academic officer of Syracuse University, effective Oct. 1. This appointment is a testament to her academic and administrative accomplishments. She will remain in her current role at Ohio State at least through Aug. 1.

Dean Ritter joined Ohio State from Cornell University in August 2019 and has overseen key changes at the university’s largest college. Comprising 38 academic departments and schools, more than 20 centers and institutes, and more than 80 major programs, the College of Arts and Sciences serves more than 17,000 undergraduate students and 2,300 graduate students with a faculty of nearly 1,300.

By restructuring the Office of Undergraduate Education, Dean Ritter moved the college away from divisional portfolios, focused more on the holistic undergraduate experience, expanded the commitment to diversity, equity and inclusion, sought to build new honors programs, and created more positions for the development of online certificates and degrees.

A staunch advocate of the Arts District, she secured the largest individual gift in the college’s history — $17 million from Ratmir and Angela Timashev — which will be used, in part, to build the Timashev Family Music Building. The following year, in fiscal year 2021, the college achieved its most successful fundraising year ever, totaling more than $70 million.

Together with Wendy Smooth, the college’s associate dean for diversity, equity and inclusion, Dean Ritter built interdisciplinary working groups for all department chairs and school directors to examine DEI issues, empowering them to create action plans for their units. In addition, she worked closely with President Kristina M. Johnson to lead the development of the president’s Race, Inclusion and Social Equity (RAISE) initiative announced in February 2021.

During her tenure, Dean Ritter diversified and expanded the college’s senior leadership, expanded the college’s research infrastructure, oversaw the creation and launch of more than 20 new certificates, majors and minors, remade the Dean’s Advisory Council, advanced the implementation of the new General Education program, and oversaw the merger of the Moving Image Production and Film Studies programs, now part of the newly renamed Department of Theatre, Film, and Media Arts.

Please join me in thanking Gretchen for her many contributions to our academic community and in wishing her success in her new role at Syracuse University. In the meantime, we will be developing plans to name an interim dean and to charge a search advisory committee to recommend a permanent replacement. We will share those plans as they take shape. 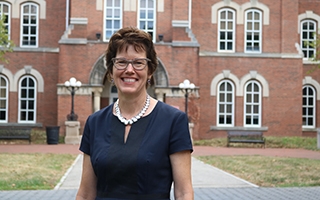