Steve Jones (BS, zoology, ’72) and Diane Jones (BS, animal sciences, ’72) are firm believers in the power of paying forward. The memorable phrase made timeless by legendary coach Woody Hayes is even emblazoned on the front license plate of one of their cars.

Steve and Diane met in a class as undergraduates. Steve, a zoology major, graduated from the College of Arts and Sciences; Diane earned her degree in animal sciences from The College of Agriculture and Home Economics (today, the Department of Animal Sciences is housed within the College of Food, Agricultural, and Environmental Sciences). They hold fond memories of their time at the university and appreciate the opportunities their degrees afforded them.

For those and many other reasons, the couple decided in 2017 to establish the Steve and Diane Jones Endowed Scholarship Fund, which provides need-based scholarships for Ohio undergraduates majoring in natural and mathematical sciences or those pursuing studies in speech pathology. The STEM-focused scholarship is a way for Steve to give back to the field that enabled his successful career in life sciences, where he retired from Laboratory Corporation of America.

The speech language portion of the fund is a tribute to the speech pathologists who supported Steve over the years as he worked to overcome a speech impediment.

“Ohio State is a land-grant university, which is important because they open up higher education to everyone,” Steve said. “I think it’s wonderful that the university continues that tradition. That was pretty much my motivation.”

The Joneses have committed an additional gift to their existing scholarship over the next several years as well as resources from their estate, which will expand the fund’s level of financial support for students. The university will be matching their gift, doubling the impact of the couple’s endowment.

The Scarlet & Gray Advantage aims to allow students to earn their bachelor’s degree without financial burdens and begin their careers on solid ground. It will build upon itself over the next decade to encompass all eligible undergraduate students in a variety of ways.

Students will not only enjoy the benefits of scholarships and grants funding their coursework and research. The Scarlet & Gray Advantage will also encompass internship possibilities, paid work opportunities, financial literacy programs, and leadership and career coaching.

Ohio State’s goal is to raise at least $800 million to expand student scholarships. The university and lead donors have created a matching program that will double up to $50 million in private donations of $100,000 or more. This match program will establish new endowments as well as support existing scholarships.

Since the Scarlet & Gray Advantage was introduced earlier this year, Arts and Sciences donors like the Joneses have prolifically lent their support with gifts matched by the university and lead donors. This generosity has transformed student life and education across the physical sciences, social and behavioral sciences, and the arts and humanities. 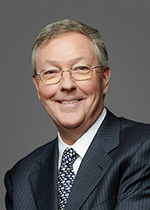 Carter Phillips (BA, political science, ’73; DRH, ’11) learned the importance of starting a career on the right foot from his father, who agreed to pay for Carter’s education with a single stipulation — he must attend Ohio State.

During his years as a Buckeye, Carter worked diligently on his education in political science while also working at the Mershon Center for International Security Studies. Within three years, he earned his bachelor’s and was able to pursue a law degree from Northwestern University.

Carter’s law degree might not have happened without his undergraduate funding from his family. When he graduated early, he approached his father and asked for the extra year’s worth of financial assistance, which he was granted.

In 2016, Carter created the Max D. Phillips Endowed Scholarship Fund in his father’s name, which helps support undergraduate education. Impressed by President Kristina M. Johnson’s vision for Ohio State and her autumn 2021 announcement of the Scarlet & Gray Advantage program, he recently contributed additional support, which he believes will put students on the path to success early.

“When President Johnson announced it, I was there and my jaw dropped,” Carter remembers. “I thought that this was brilliant, … so I made another contribution. It was a given. And I gave more than I probably would have otherwise because if we’re serious, we are going to have to fund this and stretch a little more than we would have.”

This overwhelming support will help to reduce burdens on students while they do their coursework, creating a better learning environment and increasing employability.

Jim Smith (BS, engineering, ’64; MS, engineering ’66) understands the lengths a student will go to put themselves through school. He lost his father when he was in high school, and while his mother, an educator, did the best she could, finances were still a struggle.

Jim worked multiple jobs while studying at Ohio State, including as a night watchman. “I had to work all night and then go directly to class, which was hard.”

Smith is now retired after a career at Argonne National Laboratory.

A few years ago, he decided it was important to help break financial barriers for physics students and established an immediate use scholarship fund. When he heard about the Scarlet & Gray Advantage, he immediately was drawn to its goal of providing a pathway to debt-free education. He created another endowed scholarship, now matched by the university.

Jim considers it a gift and a blessing to share his good fortune with today’s physics students. “It’s a way of staying connected and sharing one of the most important experiences of my life,” he said. “Today’s students are amazing, energetic, motivated and super smart.”

Ohio State is leading the way with this initiative, something that is vastly important to Paul (BA, political science, ’73; JD, ’76) and Marnette Perry. First meeting at a Rose Bowl party, the college sweethearts find that all roads lead back to Ohio State.

“It’s like every facet of our lives is just tied with some little string back to the university, and it is our happy place — our safe place,” Marnette said.

Inspired by the Scarlet & Gray Advantage, Paul, who serves on the Political Science Alumni Advisory Board, feels this is a golden opportunity to launch political science students into their careers.

“When I was going through my political science undergraduate career, it was always picking up some job some place just to pull enough money together to make it through the next quarter,” he said. “Then I’d look around and see other people who were my peers, but elsewhere, that didn’t have to do that. They could do internships that really helped launch their future careers.

“I want to be able to let our political science students have that opportunity, and the only way we’re going to get that done is by giving them some relief in the form of scholarships.”

The couple recently endowed a scholarship that is eligible for the match opportunity, the Paul and Marnette Perry Scholarship Fund, which will benefit students in the social and behavioral sciences who demonstrate financial need.

“We felt like investing in this because it’s transformative in these students lives, their productivity, innovation and contributions to their fields,” Marnette said.

Paul and Marnette are incredibly proud of Ohio State for the way it is leading in an initiative to provide debt-free education.

“Universities and people have talked about this, but Ohio State is doing something about it,” Paul and Marnette said. “Not just one person at a time, but through a commitment to all students. Others will follow, others will believe and do it. We aren’t just lifting up Ohio State students; we’re doing something transformative to lift up students everywhere.”

The college remains grateful to the many donors and alumni who continue to support scholarships. We would also like to recognize these significant gifts that are eligible for the match program.

Donor support of the Scarlet & Gray Advantage will have the impact to change lives. With student scholarships, internships and programs that remove all debt restrictions, students are enabled to focus on what matters most — their education and future. 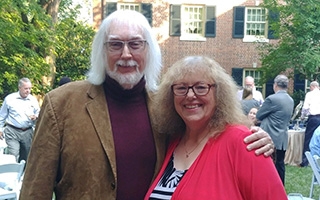