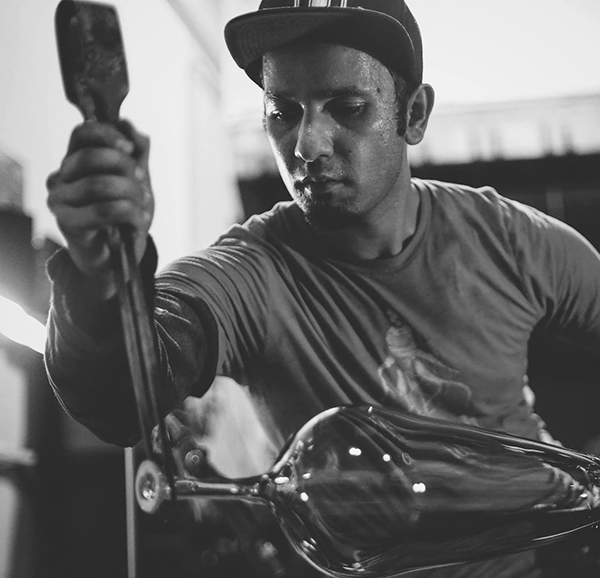 Shahid Khan in the glass studio. All media courtesy of Shahid Khan.

If you ask Shahid Khan to trace his journey on a map, the first thing you’ll notice is how far he’s traveled.

Learning from top glass artists in Denmark, Japan and Canada. Exhibits in cities like Philadelphia, Austin and Palm Springs. A glass studio in North Carolina. A glass business in Oakland.

The second thing you’ll notice is that Khan is always drawn back home — back to Ohio State.

“It means a sense of centering and grounding,” he said. “It’s a dichotomy to when I was just traveling place to place and having these interstice moments of not knowing what’s going on or what’s next. It feels really nice to have a tangibility.”

Khan’s story has many chapters, and Columbus is a thread running through pretty much all of them. Emigrating from India to Columbus as a child, a chance encounter that led to a BFA in glass, a consequential exhibition at Hawk Galleries downtown, pursing an MFA seven years after undergrad — these are moments distinct in time and affect, but linked in place. Ohio State inspired him to wander, learn and explore. It also instilled in him the value of home. It’s why he left. It’s why he comes back.

“You may feel like you’ve grasped something, whether it’s an idea or a work, but then you realize that you haven’t, and it becomes this moment of uncertainty, vulnerability and discomfort,” Khan said. “I’ve learned how to be OK in that space. It’s great to have a safety net, but sometimes that idea is arbitrary. Being under the umbrella of the institution has allowed me to plunge into some deep waters and see and explore — but always having a tether.

I've realized that maybe there really wasn't a tether.”

Shahid Khan shares his insights and philosophies about glassmaking.

Khan wasn’t interested in glass when he first came to Ohio State. He worked for JPMorgan Chase, was pursuing a business degree and seemed on track for a life in the corporate world.

A general education art history class with Dan Alvarez changed all that.

Alvarez was a glass artist working toward a BFA in fine art and honing his craft in the Sherman Studio Art Center on West Campus. Khan and Alvarez became fast friends, and before long, Khan was helping Alvarez in the glass studio, squeezing it in between working 30 hours a week at the bank and pursuing his business degree.

In the studio, Khan was using his hands, manipulating materials and bonding with a friend and a mentor over something new. Eventually, he reached a crossroads. He wanted to pursue glassmaking, so he dropped his business degree aspirations in favor of a BFA in glass.

Khan graduated in 2011, and with encouragement from his boss at JPMorgan Chase, he closed the door on his corporate ambitions for good and traveled to Ebeltoft, Denmark, to work for and learn from some of the best glass artists in the world, Tobias Møhl and his wife Trine Drivsholm.

“After that, it was over a decade of learning how to be vulnerable constantly,” Khan said. “It wasn’t an easy decision at the time, but it was definitely a pivotal decision in becoming who I have become now.”

From Denmark, Japan and back the to the U.S., Khan traveled around the globe and soaked up knowledge from contemporary glass artists such as Leif Vange, Peter Ivy, Devin Burgess and Pablo Soto. In 2015, Khan was working in an assistantship at the Penland School of Craft in North Carolina, where he was embedded in a nurturing and lively craft community. A certain collaborative element, however, was missing. That’s when an old friend reached out and shook things up again.

Alvarez and Khan wanted to make glass together. The pair met up in Columbus, drew up a business model and took their talents to the West Coast, where Khan started Shahid Khan Glass.

Working out of their own hot shop in Oakland, Khan and Alvarez made work for galleries and crisscrossed the country to display their pieces at various exhibitions. Leveraging connections Khan made as a journeyman glassmaker, they linked up with other artists in the glass community, renting out their spaces to create and show their work.

In 2017, Khan and Alvarez took part in “The State of Glass Art,” an exhibition at Columbus’ Hawk Galleries featuring pieces from alumni of Ohio State’s glass program. Even though he’d graduated six years prior, Khan felt a familiarity with the community. He’d also been on the move constantly since then.

“I realized I’d been traveling for quite some time, and I didn’t really set up any roots,” he said. “I had a conversation with Richard Harned, the head of the glass program, and he asked if I’d thought about graduate school.

I decided to just kind of go for it.” 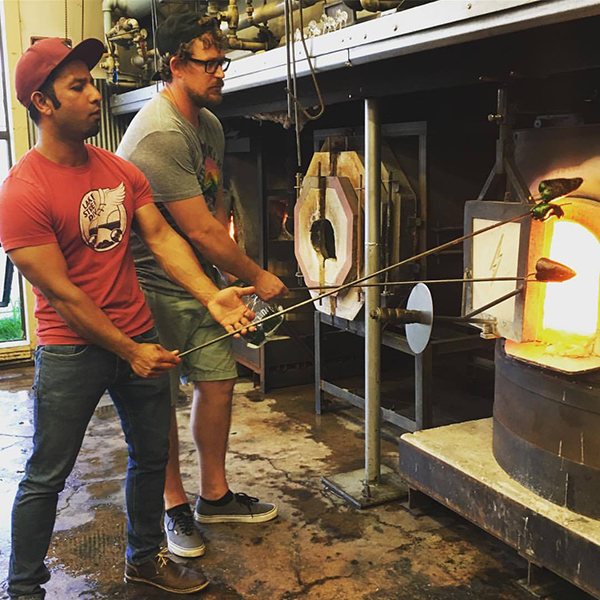 Khan graduates this spring from Ohio State again — this time with an MFA. His outlook now is a little different from when he first earned his BFA a decade ago. Though glassmaking is still a focal point for Khan, he forged his own graduate curriculum to extend into other mediums, gain foundational knowledge on art philosophy, enterprise and pedagogy, and learn how to teach art.

“I’ve been really inspired by the teaching of people like Richard Harned, art lecturer Deb Scott and associate professor of art Alison Crocetta,” Khan said. “I got to see these very polished professors teaching these foundational ideas, and that helped me think, ‘How would I teach this?’ The very first day of class, I was immediately attracted to teaching and simultaneously being a student.”

Khan has had mentors throughout his life. After his family immigrated to Columbus, he was a student of the Worthington City School District, and his teachers’ mentorship helped him adjust to life in a new environment. He had mentors in the business world before he pursued glass. Alvarez was his mentor in the glass studio. Khan’s journey is full of others more fluent in their crafts imparting wisdom onto him, and it’s shaped his ideas of the world.

“Teaching is something I’m really passionate about, and if it wasn’t for teaching and mentorship, my story wouldn’t really exist,” Khan said. “Pedagogy and the idea of pursuing higher education was an interest in graduate school. … I wasn’t much interested in specificity in my medium. I was more curious about academia and how it can inform me, my practice and where will I be at the end of my journey.”

So what exactly is next? For Khan, it’s a tricky question to answer. Currently, he’s teaching “Art 3003: Glass Basics,” a foundational studio introduction to glassmaking. He’s writing about and contextualizing his work leading up to this point, and he’s thinking about how it will evolve. He’s building a studio at home and working with mixed media in conjunction with glass. Khan wants to continue making, teaching and exploring. His options are varied, his doors are open, and his time at Ohio State has him ready to embark on wherever his next season of life takes him.

This tether, whether it’s a financial one or an emotional one or just kind of an existential one, it is a contract and it does end,” Khan said. “But it doesn’t really stop there. For me, it’s like finding another thing to climb up.” 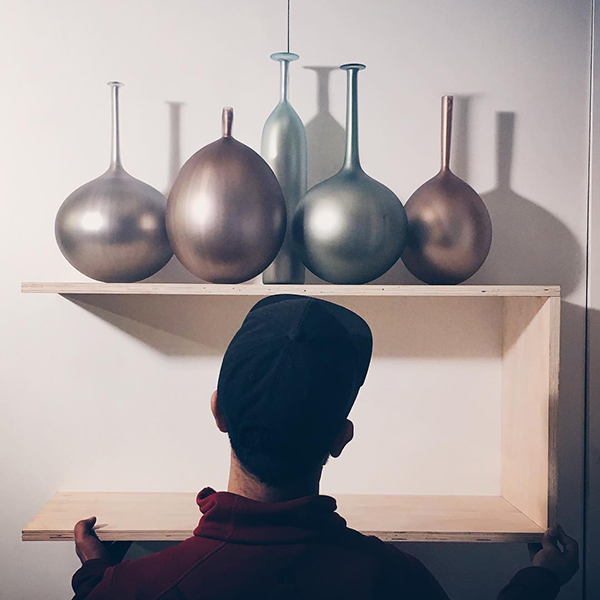 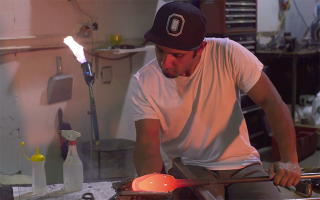