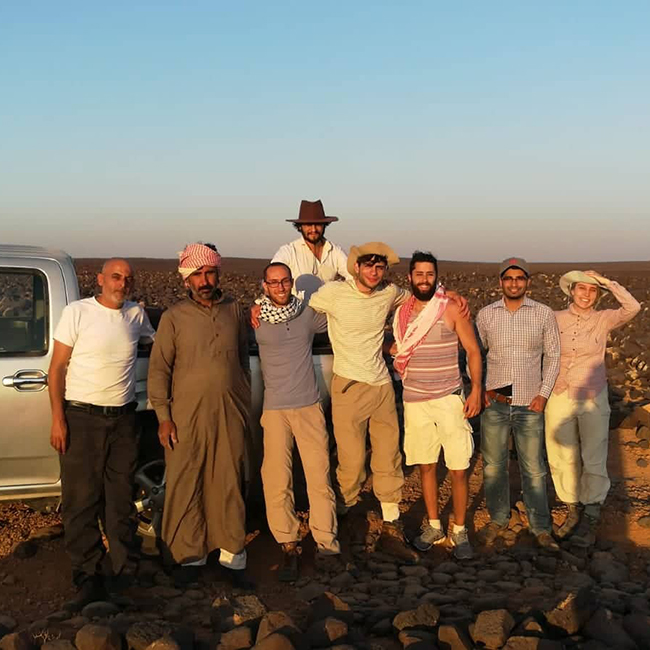 Deep in the black basalt deserts of North Arabia, ancient inscriptions etched in rock and untouched for millennia lie waiting to be found.

And Ahmad Al-Jallad, M.S. Sofia Chair in Arabic Studies and associate professor in the Department of Near Eastern Languages and Cultures, is combing the landscape in search of them.

“Ancient Arabia is not in the library,” Al-Jallad said.” It’s in the field. It’s in the deserts, the steppe. These are the places we have to go to study this lost world, and in doing so, we’ve made tremendous discoveries.”

Al-Jallad, who was appointed Sofia Chair in August 2018, is a philologist, epigraphist and language historian who studies Arabic’s early, pre-Islamic history — a period shrouded in mystery relative to what is known after Islam’s advent in the early seventh century. The region’s early history is typically linked to the early history of Islam. But Arabia’s pre-Islamic past, Al-Jallad says, is comparatively unknown from an evidence-based perspective.

“I’m interested in studying pre-Islamic Arabia on its own terms using authentic documents, papyri, epigraphy and archaeology to shed light on this forgotten period,” he said. “So, we go out into the desert; we do surveys where we look for inscriptions that were carved 2,000 years ago — sometimes nearly 3,000 years ago — which attest the earliest stages of the Arabic language. We are writing the first evidence-based history of Arabic and its speakers before Islam.”

Al-Jallad is regarded as one of the world’s experts on early Arabic texts. The Safaitic alphabet, an extinct indigenous script of Arabia, is carved on rock faces throughout the Harrah, a desert region stretching from southern Syria, Jordan to northern Saudi Arabia that has been occupied by ancient nomads for thousands of years. Al-Jallad has led several archaeological expeditions into the Harrah, scouring the dry, rocky landscape for Safaitic engravings he hopes will add clarity and context to the region’s past.

Some historical breakthroughs Al-Jallad has uncovered include an ancient Arabian zodiac, the oldest known records of Arabic poetry and new details about pre-Islamic Arabian mythology.

His latest discovery came this past June during a trip with four Ohio State students to the Harrah. The expedition was in collaboration with the Jordanian Department of Antiquities and the Hosn Research Center in Abu Dahbi, United Arab Emirates. As the group hiked across the vast, unexplored territory, it came across a clearing at the top of a mountain. The installation was covered with Safaitic inscriptions memorializing a woman whose name Al-Jallad renders as “Gār.”

Gār, Al-Jallad learned, was placed in a burial pit filled with small stones. The finding provided context to previous thinking that ancient Bedouins didn’t bury their dead, shedding new light on how the deceased were actually treated and memorialized. Al-Jallad and his archaeological team fully documented the site, and he said he hopes the research will soon be published. 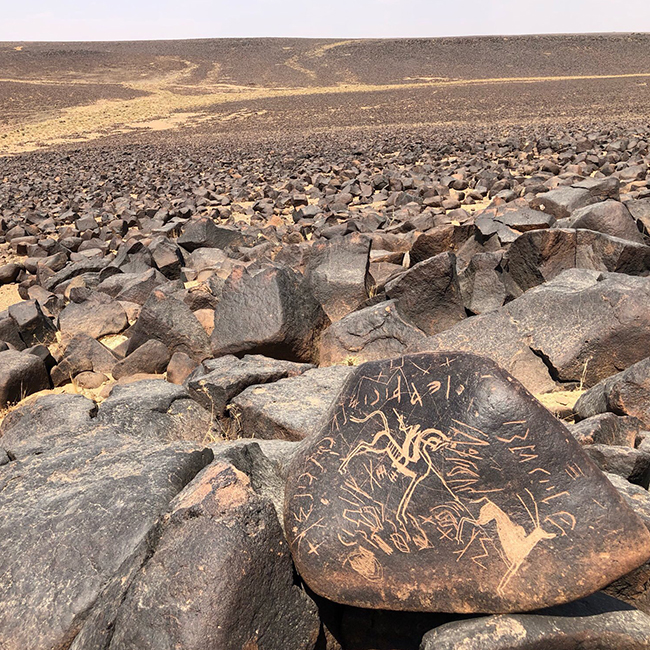 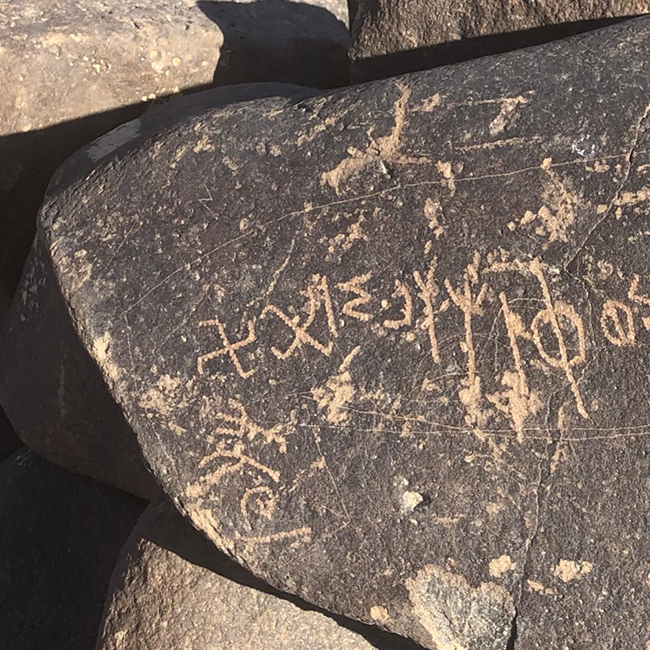 Al-Jallad and his students encountered several inscriptions on their expedition through the Harrah. Above is a carving of a hunter spearing an antelope. The inscription below, according to Al-Jallad, are the last words of a man who died around 2,000 years ago and reads, "wa qāla edhhab fa-lā tatdhakkar {l/n}ī ," which translates to, "And he said (to the passerby) go! And forget me!" Photo courtesy Ahmad Al-Jallad.

Al-Jallad was most recently an assistant professor of ancient Arabia and Arabic and Semitic Linguistics at Leiden University’s Centre for Linguistics and Institute for Area Studies. He’s also held positions at Oxford University, the University of Pisa, Harvard University and Brandeis University. He received his PhD in Near Eastern Languages and Civilizations from Harvard in 2012.

The M.S. Sofia Chair in Arabic Studies was established in 1990 with gifts from Zuheir Sofia. The endowed chair position supports a distinguished scholar who contributes to more understanding of Arabic language, culture and literature.

“It’s an exciting opportunity,” Al-Jallad said. “Ohio State provides a fertile environment for this path breaking research, and the Sofia Chair comes with a research fund that helps us make history.”