Last month, The Ohio State University Board of Trustees approved the naming of the Timashev Family Music Building, in recognition of the largest gift by an individual or foundation in the college’s history. Beyond this, however, the June 2020 trustees meeting was historic for the college for many reasons, as significant philanthropic contributions and support were recognized across multiple departments and areas.

The gifts recognized at this most recent board meeting helped the College of Arts and Sciences raise nearly $53 million in philanthropic support since last July, which will benefit its people, programs and places. Overall, as part of Time and Change: The Ohio State Campaign, the college has raised nearly $200 million toward a $400 million goal from more than 22,000 donors. This includes the establishment of 12 new endowed chairs or professorships across several departments. These endowed positions are a powerful tool to recruit and retain talented faculty members, raise the profile of the college and encourage groundbreaking research and education.

The Miltiadis Marinakis Endowed Professorship of Modern Greek Language and Culture was established with funds raised collectively by the Greek community — with gifts from members of the Ohio Hellenic Paideia (formerly the Modern Greek Steering Committee) and Evangelos Marinakis.

An active search is underway to fill the position, which brings even more prestige to the university’s Modern Greek Program and the Greek community at large.

The Andrei Baronov and Ratmir Timashev Professorship in Chemical Physics was established with gifts from Veeam Software Corporation. In addition to the named professorship, this position in chemical physics will provide robust resources to sustain and extend the discipline’s research and teaching excellence at the university.

An ongoing search for the professorship holder is currently underway.

Erin V. Moore has been named assistant professor and holder of the Dr. Carl F. Asseff Professorship in Anthropology and History of Medicine, effective August 2020. Moore comes to Ohio State from Columbia University, where she was a postdoctoral research scientist in the Heilbrunn Department of Population and Family Health at Columbia’s Mailman School of Public Health

This professorship was funded by two-time Ohio State alumnus Carl Asseff ’63, ’66 MD, a member of the college’s Dean’s Advisory Committee. Asseff, a retired ophthalmologist and former military doctor, created the position to bridge the gap between the humanities and medicine and ensure that the next generation of medical professionals has a solid, humanities-based education to complement the rigorous scientific curriculum.

Christa Teston has been named associate professor and holder of the Andrea Lunsford Designated Professorship for Rhetoric, Composition and Literacy in the Department of English effective August 2020. Teston, whose research focuses on how humans navigate uncertainty in technoscientific, biomedical and media-rich domains, serves as the department’s director of business and professional writing.

This designated professorship was established by alumna Andrea Lunsford ’77 PhD, who is currently the Louise Hewlett Nixon Professor of English Emerita at Stanford University. Designed to reward an up-and-coming faculty member, this term position will provide funds for salary and special research projects to be used at the holder’s discretion.

Jingyin Huang has been named assistant professor and holder of the Alice Louise Ridenour Wood Chair in Mathematics, effective August 2020 through August 2025. Huang received his PhD in 2015 from the Courant Institute at New York University and held postdoc positions at McGill University and Max-Planck Institute for Mathematics (Bonn) before coming to Ohio State.

This fund, established with gifts from John ’75 and Laura Moffitt in honor of Jim Collinson, professor emeritus in the School of Earth Sciences. The fund will support students, enabling them to attend the annual Geology Field Camp. The field camp has been in operation for more than 70 years and is a vital resource for geology majors, providing a unique environment for field-based research experience.

Established with gifts from Richard Guzzo ’74, this fund will provide support for undergraduates who are majoring in psychology and have a second major.

This award, funded by Scott Gledhill ’67, is given annually to the best paper written by an undergraduate student in applied economics in the Department of Economics.

This fund, established by Tom Steckel, will be used to support the historic Orton Geological Museum. 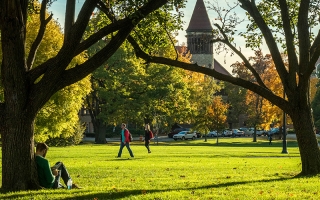