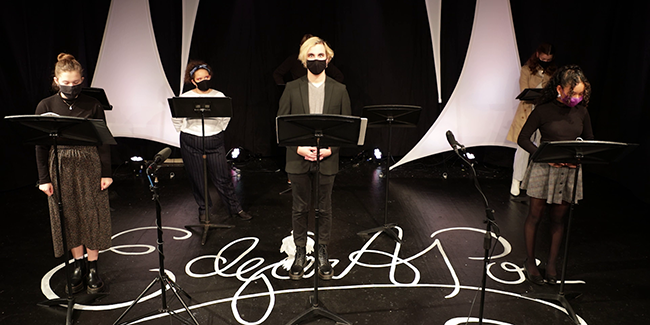 The program attracts students interested in theater and is in constant production mode, churning out between eight to 10 shows each school year. In the 32 years since its founding, the program has grown in distinction, gaining loyal support among the community.

So when COVID-19 derailed activities around the country last spring, program director Justin Nawman ’05, ’07 couldn’t just draw the curtain and wait out the pandemic.

“The kids need to have a theater season; it’s up to us to give them a sense of normalcy and accomplishment and finality,” said Nawman, who earned a BA in theater from the Department of Theatre and an MA in teaching and learning from the College of Education and Human Ecology. “You still have to give to the kids. The show for them must go on.”

To keep performing while maintaining COVID-19 protocols, Thomas Worthington’s theater program has revamped production. With help from his staff and an assist from psychology alumnus Jason Dale, who volunteers his time to take photos and video, Nawman has pivoted from performing before a live audience to a virtual one, allowing productions to be streamed online.

“Once we knew things would have to be different, I approached Jason and said, ‘I think we need to film every show so we have a product for the kids to work toward,’” Nawman said.

The idea to perform virtually emerged after the program’s 2019-20 season came to an unceremonious end. The spring musical, “Carrie,” originally slated for May as the last production of the year, was cancelled. The program performed what ended up being its final play, “Around the World in 8 Plays,” without an audience at the end of March. Dale brought in his own video equipment to record “Around the World,” but when they decided to move their performances online, they realized they needed to boost the production value on the video side.

This meant thinking about things they didn’t have to worry about before, like shot composition, shot variation and editing. This also meant swapping out some productions with others, as the rights to some plays they had planned only allowed them to perform for a live audience — not a digital one. Nawman and Dale spent the summer discussing how they could switch to virtual performances without sacrificing quality.

Their ideas coalesced in October 2020 for Thomas Worthington’s first production of the 2020-21 season, “The Seussification of Romeo and Juliet,” a Dr. Seuss-esque reimagining of Shakespeare’s timeless classic. Instead of presenting it as a traditional play, it was composed and edited in a style similar to a television sitcom. The following month, the students performed “Twisted Tales of Poe,” Edgar Allen Poe stories presented in the form of a staged radio drama. In December, Dale utilized multiple cameras and edited together continuous takes to present the comedy classic, “You Can’t Take It with You.”

Thomas Worthington High School theater students perform "The Seussification of Romeo and Juliet" (above) and "You Can't Take It with You" (below).

It’s all to try to recreate the magic of performing for an audience while giving students a chance to do what they love — even if it feels a little different.

“Your job as an educator isn’t to take away,” Nawman said. “It’s to give freely and openly, to share the knowledge, the opportunity, the experience.”

Productions are a massive collaboration with a variety of roles — from directors and costume designers to audio engineers and light technicians. Each works in conjunction with the other for things to run smoothly. It’s a lesson Nawman has drawn from throughout his career, and one he’s especially leaned on during an extraordinary transition.

“There were a ton of things happening backstage at the Ohio State theater,” he said. “There are tons of moving parts in the Drake Performance Center — a show still has to happen. Theater is the collaborative art; you still need to have dozens of people backstage on the same page. The enormity of what it meant to have things function properly, I learned from Ohio State.”

The Thomas Worthington theater program recently performed “Talking With,” with “Annie,” “Snow White” and “Nunsense: The Mega-Musical” on deck to round out the production schedule. For Nawman, the phrase “the show must go on” isn’t a hyperbole. It’s a reminder to continue creating, regardless of circumstance.

“That’s what inspires us,” he said. 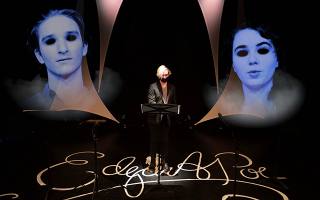