Journalism, outreach and theatre come together to tell unheard stories of Afghan women

The professional worlds of Lesley Ferris and her daughter, Amie Ferris-Rotman, rarely collide.

Lesley, Distinguished Professor of Arts and Humanities in the Department of Theatre, is a seasoned artist who has directed more than 50 plays around the world.

Amie, a journalist and 2013 Fellow of Ohio State's Kiplinger Program in Public Affairs Journalism, has reported from more than 12 countries for Reuters, The Wall Street Journal and, most recently, Foreign Policy magazine. Between 2011 and 2013, she was stationed in Kabul, Afghanistan — a career move that eventually led to her mother’s production of “Sahar Speaks: Voices of Women from Afghanistan,” which debuted in October in London. 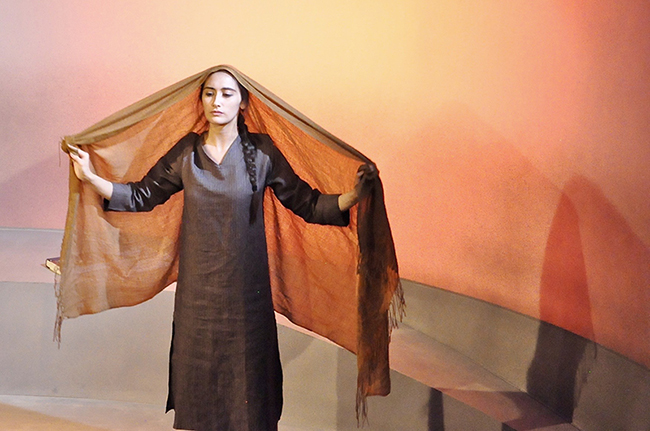 The production consisted of three short, back-to-back plays, each based on a news article written by a female Afghan journalist who was mentored through Amie’s Sahar Speaks initiative.

While Amie was reporting in Afghanistan — covering topics ranging from gruesome honor killings to all-women rock concerts — she couldn’t help but notice the complete lack of female Afghan reporters working for western news outlets, though there were plenty of their male counterparts. Women have a slight presence in local media, Amie said, but “for global audiences, the Afghan woman’s story is being told by Afghan men, foreign men and foreign women.”

So in 2015, she launched Sahar Speaks to provide training, mentoring and international publishing opportunities to female Afghan journalists.

“Sahar is a common female name in Afghanistan, translating as ‘dawn.’ Its meaning here is two-fold: it represents all Afghan women, and also heralds the beginning of a new era, where Afghan female reporters can tell their stories to the world,” according to the organization’s website.

The program has since trained 22 women, whose stories are now published in outlets such as The Huffington Post and The New York Times. The women have gone on to work for The New York Times, BBC, al Jazeera and more.

Lesley was inspired after reading the first round of stories and decided to adapt three of them for the stage with her theatre company, Palindrome Productions. The stories — two of which are autobiographical — describe difficult events including dressing up as a boy to go to school, marrying as a 7-year-old and becoming a refugee.

Amie said she was initially hesitant about her mother’s idea.

“It was difficult for me to see stories that were produced for a news consumer to be reshaped for a new audience,” she said.

But Lesley saw it as an opportunity to make the stories come to life.

Due to cultural stigmas against Afghan women participating in theatre, there was little collaboration between Lesley’s playwrights and the actual journalists, but the stories were enough to go on, she said.

“I think that even though [Amie] has been to theatre and I’m her mother, she just didn’t realize how powerful it could be,” Ferris said. “People were just sobbing.”

In the end, Amie was “massively, pleasantly surprised,” she said.

Seeing the stories come to life on the stage made them take on a new urgency and stir new emotions … the power of the stage is incredible.”

Lesley has plans to duplicate the production in the future, and Amie is working on launching the third round of Sahar Speaks, in which women will develop videos for social media. She hopes the program can eventually become a model for change in other countries.

The stories adapted for the stage include: