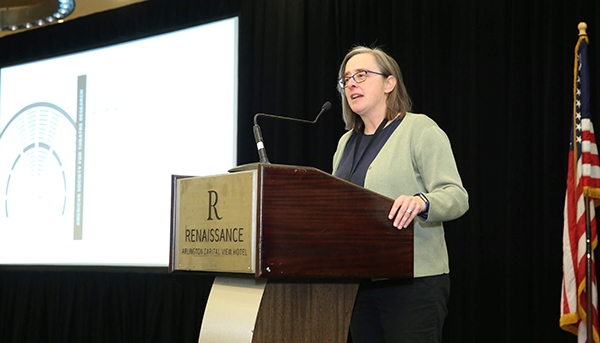 Following 20 years as a faculty member at the University of Michigan — and a long career as a professor, playwright, director and author before that —Westlake has returned to her home state of Ohio as the first chair of the newly renamed Department of Theatre, Film and Media Arts (TFMA).

“The whole 20 years I was working at the school up north, my sister continually called me a traitor,” Westlake joked. "Now she’s over the moon.”

In her new position (she will also serve as a professor in the department), Westlake will have a number of opportunities in the years ahead.


She will work to truly bring together units that had been separate until this year. She will have to re-engage the public with plays and movies following the COVID-19 pandemic. And she’ll focus on increasing the department’s diversity to showcase the best of Ohio State.

But rather than seeming daunting, those challenges were all part of the thrill of moving back home and accepting her new position. With the added benefit of the department moving into a brand new building in the near future and the opportunity to collaborate with a broad array of other units in the College of Arts and Sciences, Westlake can’t wait to get started.

“I’ve always thought that theater was never separate from the other arts,” Westlake said. “The potential for collaboration between our units is staggering. And the new building is going to be part of that, that we’ll be together in this amazing space that allows us to collaborate.”

Westlake was first drawn to performance art as a 10-year-old in Dayton. Her sister Rebecca was dating a boy who performed as a flying monkey in a community theater production of The Wizard of Oz. Westlake remembers being enchanted by and drawn to the theater’s magic. Her other sister Margaret soon found an advertisement in the local newspaper calling for auditions for a children’s theater company. Westlake jumped at the opportunity.

Westlake continued attending the theater through high school, where she was encouraged to write her own musical. She also picked up music, performing in jazz choir, high school bands and marching bands. During difficult times when she was discovering who she truly was, music and theater provided a refuge.

“I always say that music and theater basically saved my life,” Westlake said. “Seriously, it was the very early 1980s, and I was just coming out as a lesbian, and that was a very painful time for me because it was at a time where that was considered wrong. And then the AIDS crisis was just starting. The gay community was very stigmatized. Sometimes I just felt hugely lonely, but I always found a family of accepting people in music and theater.”

In early adulthood, while living in Portland, Oregon, Westlake was inspired by a volunteer trip she took to Nicaragua. Building off the lessons she learned from her mother — a strong feminist and civil rights activist who was involved in the politics of Central America — Westlake traveled to Nicaragua to help, and learn from, its citizens.

Once there, she was amazed by the level of community engagement generated by the arts and funded by the government. She saw troupes set up to help women understand their rights or to help people improve their agriculture practices.

“I really developed a keen interest in studying how different people approached the arts and how communities used it to unite themselves and solve real-world problems,” Westlake said. “I carried that back with me, and I decided I really needed to have more in terms of intellectual engagement.”

That desire sparked her to continue her educational journey with advanced degrees and eventually become a professor herself. She earned a master’s degree in theatre arts at Portland State, then got her PhD in theatre and drama from the University of Wisconsin-Madison. That began a career in academics that took her to Wisconsin, Auburn University and Bowling Green State before she spent the past 20 years at Michigan. 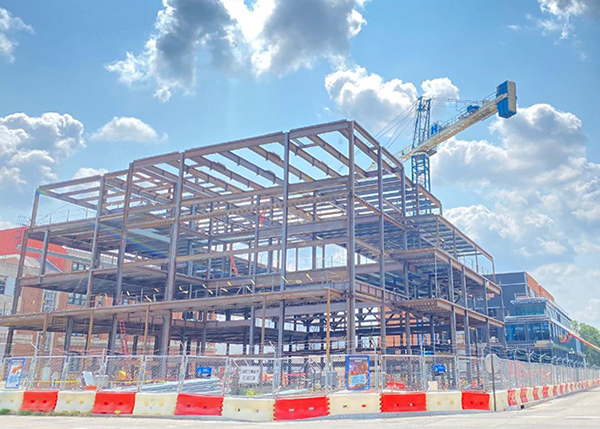 Ongoing construction at the new Theatre, Film and Media Arts Building in the Arts District.

Now, though, Westlake has returned home to start something new. As the first chair of TFMA, she’s taking a role where she can build something of her own and establish a legacy.

One of her biggest early focuses is to bring together faculty and staff who were previously separate and build collaborations not just with other arts disciplines, but with departments from the entire college. She knows that, regardless of the specific area of study, storytelling binds us all together. And in TFMA’s new building, they’ll have the technology and location within the Arts District to make big things happen.

“No matter what you’re engaged in, you’re talking about using images to convey stories that help us explore who we are and what it means to be human beings on this planet,” Westlake said. “I think people are naturally going to gravitate toward each other. People on our faculty are already engaged in these kinds of collaborations. [The new building is] just going to make it so much easier.” 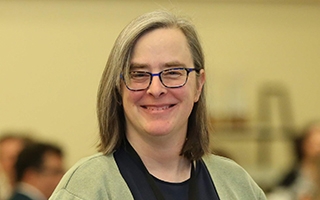