The Science of Peace

For Braumoeller, recent scholarly works and popular books advancing the decline of war and violence are troubling. “That theory and the evidence used to support it left me with a nagging little itch that something might not be quite right,” he said.

Similarly, Cranmer is skeptical of people who write off the United Nations as a paper tiger. “I don’t like assumptions,” he said. “I wanted to determine whether the U.N. really fulfills its mission of suppressing conflict.” 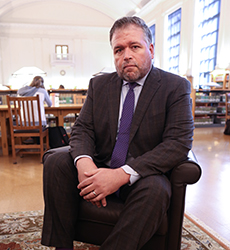 To answer the question of whether war is, in fact, on the decline, Braumoeller set about exploring the data.

“The data simply doesn’t support the ‘decline of war thesis,’ no matter how I’ve looked at it,” Braumoeller said.

While Braumoeller’s research revealed a significant drop in the rate of conflict initiation just after the end of the Cold War, “the bad news,” he said, “is that’s the only good news.” Looking at data from the Correlates of War project on war intensity, or deadliness, Braumoeller found that there has been no significant change in the intensity of warfare since 1815.

“Peace is more than just the absence of war,” Braumoeller said. “The spread of peace doesn’t automatically imply a decrease in war or warlike behavior. There is no evidence that improvements in human nature have led to a decline in international conflict.”

The key to understanding this apparent paradox, said Braumoeller, is to understand the nature of international order. During the Cold War, peace spread and became more consolidated within the Western liberal international order. It also did so, to an extent, within the Soviet bloc. But at the same time peace was growing within those two international orders, there was a lot of conflict between them. And in the post-Cold War world, we saw peace spread as the Western liberal order expanded in the wake of the Soviet collapse. But Braumoeller says it looks like peace has reached its limits and that the Western liberal order might be in real trouble in the not-too-distant future, and with populism on the rise and Russia actively working to undermine it.

“If decision-makers really believe that war is coming to an end and that people just don’t fight international wars anymore, then they may fail to deter a threat or address dangerous issues like a territorial dispute.”

Almost 30 years ago, Braumoeller decided to devote his life to the study of war in hopes that a better understanding of war would help to create peace. His biggest concern about the argument that war is on the decline is the risk of complacency.

But Braumoeller isn’t all doom and gloom. He believes that the human race has the capacity to reject violence and, in fact, has done quite a bit to reduce it.

“We’ve learned perhaps the most important lesson that humanity can learn: Long-term cooperation is more valuable than short-term gain,” he said. 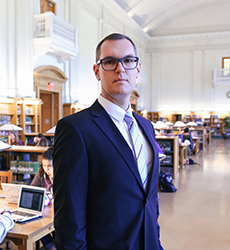 Finding common ground is difficult, but Cranmer’s research suggests that the U.N. is just the forum for building alliances and reducing conflict.

Last July, Cranmer published his conclusive finding — the U.N. delivers on its promise and actually does suppress conflict. The study, conducted with collaborator Scott Pauls of Dartmouth University, was the first of its kind to present evidence that U.N. voting coalitions improve the chance for peace among voting block members and that the U.N. provides a forum where diplomacy reduces the chance of war.

Cranmer and Pauls analyzed more than 65 years of U.N. voting records to assess the organization’s impact on the spread of democracy, the building of defensive alliances and the suppression of conflict. They found that the process of nations working together over time builds trust and facilitates fast, transparent communication that raises the chance of resolving crises peacefully.

“There is more nuance in voting records than was previously thought,” Cranmer said. “The evidence demonstrates that the U.N. is more effective at achieving its mandate of avoiding wars than many experts think.”

From the voting records, Cranmer and Pauls identified historic voting alliances — affinity communities — consisting of long-term macro-clusters and short-term micro-clusters, which provide the basis for coalition-building and cooperation.

Macro-clusters named in the research are the more enduring U.N. voting communities. One macro-cluster identified is comprised of the U.N.’s Western European and Others Group as well as Russia, Japan, China and some Eastern European countries. The second, much larger group comprises the balance of U.N. members.

According to the study, there have been 15 times in the U.N.’s history when the two macro-clusters have merged into a voting community including all but a few states. In most of these instances, the U.S. and a small number of other countries formed a group separated from the rest of the world as a result of divisive votes on issues like the Middle East and human rights.

Micro-clusters are more volatile voting alliances that form and dissolve in response to faster-moving political dynamics. The high level of voting agreement within micro-clusters translates into the largest degree of conflict suppression.

“It is through this mechanism of intensified diplomatic interaction that the U.N. has historically been able to better achieve its primary goal of maintaining international peace and security,” Cranmer said.

While this is all well and good, the fact remains that in the process of doing what’s right, we often resort to force, like when confronting human rights abuses, international terrorism or nuclear threats.

“That’s not bad, in and of itself,” Braumoeller said. “What we haven’t yet done is figure out how to make the world a better place and eliminate war at the same time.” 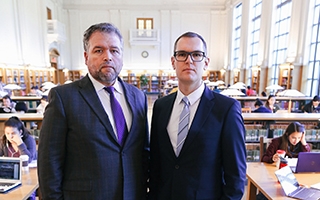