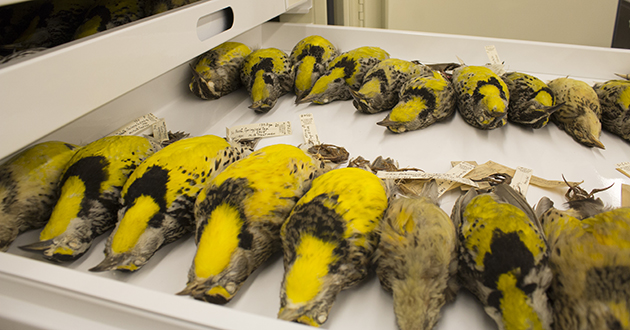 In the far reaches of West Campus, thousands of specimens await discovery.

They sit in cabinets, drawers and jars of ethanol, until they are needed for research. Tiny, handwritten tags tell their life story.

Check out the Museum of Biological Diversity during its annual open house on March 23, 2019.

Collection years range from the mid-1800s to present day. Some came from as far away as the Philippines, while others were found closer to home, near Lake Erie. Some specimens are common, like thrushes that could be found in any Ohio backyard. Others — like the Eskimo Curlew — were collected abroad and are now likely extinct.

This diverse group of creatures makes up the Museum of Biological Diversity’s prized tetrapod collection. Containing mammals, birds, amphibians and reptiles collected by Ohio State faculty and staff across decades, this collection is vital to the greater scientific community as a repository of research subjects for future study.

With this purpose in mind, the safety and continued preservation of specimens is the museum’s top priority, says Angelika Nelson, former curator of the collection.

“Our main goal is preserving these specimens for future generations,” said Nelson. “You never really know what the future will bring — what might happen to these species or what new research techniques might come up.”

Although many animals in the collection have been dead for years, they still provide a valuable service, especially as research goals and methods change over time.

“I mean, who would have thought that in 1860, when they collected some of these specimens, anyone would one day want to get a genetic sample?” Nelson said. “But today, it’s possible.”

The collection’s mission is becoming more crucial, as more animals that were once common become endangered or extinct.

“The classic example is the passenger pigeon, which was once the most common bird in North America,” Nelson explained. “There were millions of them, so many that a flock would move through a city and darken the skies for 24 hours. And then, a century later, they were completely extinct.”

One of those needs was for special cabinets on wheels that could be easily moved in an emergency, to store some of the collection’s most valuable specimens. This includes crucial “type specimens” — specimens researchers use to identify and classify species. The collection still stores some of its specimens in heavy wooden cabinets. In the event of a fire, many of the 25,000 tetrapods might be lost.

While Foren’s desire to contribute to the museum is fueled by a lifelong love of animals and her formative summer research experience, she also cherishes her Ohio State experience as a whole. After growing up in Ohio and working for the U.S. Army in Japan, Foren values the time she spent at Ohio State, saying it gave her the greatest sense of community out of all the places she’s lived.

“I also learned to appreciate how many resources the school had and how many people there are to connect with,” said Foren. “There’s something for everyone here.”

As a summer fellow at the Museum of Biological Diversity, Foren conducted research in bird egg shell reflectance and contributed to the museum’s preservation efforts. To preserve bird specimens, Foren prepared and cataloged bird carcasses, a task not everyone outside the walls of the museum understood.

“I tried to explain to someone about how I would prepare the birds and then put the specimens away in drawers,” Foren said. “And they asked, ‘Why would you put them in drawers?’ And I’m like ‘To save them!’”

Although the museum is open to the public only on a limited basis, Foren calls it a “hidden gem,” and feels it’s important that more people know about the work that’s being done there. In addition to the tetrapod collection, the museum houses Ohio State’s Borror Laboratory of Bioacoustics, as well as collections of fish, fungus and insects.

“It’s so important to preserve what we can, while we can,” Foren said. “It’s definitely an area that needs a lot of funds.”

Nelson concurs, adding, “There’s always something that needs to be done. We’re not static. Things improve here. Our goal has always been to move forward.” 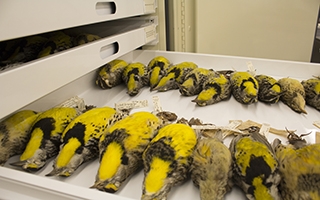