Across the College of Arts and Sciences, scholars and researchers are making discoveries that advance their fields and influence the world. Their work doesn’t just live in labs and libraries — it is woven into students’ lives and folded into communities across the globe. With this collective scholarly inquiry and an ever-growing research profile, the college is building a powerhouse to nurture innovation and shape the future. Below is just a sampling of the incredible work happening in the Arts and Sciences.

Barbara Andersen of the Department of Psychology was named a 2018 Distinguished University Professor — a permanent, honorific title awarded by Ohio State’s Office of Academic Affairs to full professors with exceptional records in teaching, research, scholarly or creative work and service. Andersen is one of only two Distinguished University Professors named in 2018. She was awarded a $30,000 one-time grant to support her academic work, which surrounds psychological, behavioral and biobehavioral aspects of cancer as they relate to disease progression, with recent work including clinical trials for cancer patients to reduce stress and depressive symptoms; improve immunity; and reduce the risk of recurrence.

Stephen Lindert, assistant professor in the Department of Chemistry and Biochemistry and faculty member under the university’s Translational Data Analytics Institute, received a five-year, $1.8 million R01 grant from the National Heart, Lung and Blood Institute to study heart-muscle contraction and identify potential new drugs to treat heart failure. Lindert and his team will use computer-aided drug discovery to pinpoint new therapeutics for left ventricular systolic dysfunction, one of the most common types of drug failure in which the heart loses some of its ability to contract and can’t pump with enough force.

Molly Farrell, associate professor of English, won the Virginia Hull Research Award for Scholarship in the Humanities to support the completion of her second book, New World Calculation: The Making of Numbers in Colonial America. The book investigates mathematics as a form of humanistic inquiry and personal expression, and will be the first literary critical monograph exploring numeracy in colonial America. Farrell’s award will allow her to travel to research libraries around the country, examining historical documents key for her book’s completion.

Ezekiel Johnston-Halperin, associate professor of physics and director of the Center for Exploration of Novel Complex Materials, is leading a multi-institution research initiative to develop a new way to construct microwave circuits, thanks to a $2 million grant from the National Science Foundation (NSF) Division of Emerging Frontiers and Multidisciplinary Activities. Johnston-Halperin’s four-person team will work on next-generation microwave electronic devices, which play a critical role in wireless communication and information technology.

Elizabeth Cooksey, professor of sociology and director of the Center for Human Resource Research, continues her work on the National Longitudinal Study of Youth with a $2.3 million grant from the National Institute of Child Health and Human Development. Her research will extend data collection for young adults ages 21 and over who have been interviewed on a biennial basis as part of the longitudinal study, and will enhance the data with information on relationship history, employment and environmental pollution exposure. The results of this project are increasingly showing links between behaviors, health and wellness in the first two decades of life, and family, economic and health outcomes later in life.

Brian Joseph, Distinguished University Professor of linguistics, received a $74,800 National Endowment for the Humanities Digital Advancement Grant for his project, “Named Entity Recognition for the Classical Languages for the Building of a Catalog of Ancient Peoples.” Joseph, along with classics lecturer Christopher Brown and linguistics professors Marie Catherine de Marneffe and Micha Elsner, will create a catalog of groups and individuals mentioned in ancient sources, focusing on the historical role played by those other than “great actors” (the important individuals, states or empires singled out in historic texts).

Baldwin Way and Zhong-Lin Lu of the Department of Psychology, along with Christopher Brown of the Department of Sociology, received a $730,200 grant from the National Institute on Drug Abuse for their ongoing research on the correlation between exposure to violence and substance abuse. Their study works in tandem with a longitudinal study of adolescents in Franklin County, and combines traditional surveying with neuroimaging to determine independent effects of exposure to violence and substance use on changes in neural structure and function over time. They will also examine the degree to which neural activity predicts future substance use.

The Arts Initiative at Ohio State received a $16,754 Sustainability grant from the Ohio Arts Council, which will provide financial support for operating activities at Hopkins Hall Gallery and Urban Arts Space, including exhibitions, programs and funding for student interns. The Ohio Arts Council’s continued support of the arts at Ohio State has positioned the Arts Initiative as a leader in art education through collaborative alliances with local, national and international arts organizations, creating opportunities for faculty and students to exhibit and perform beyond the university community and in turn advancing the creative growth of the citizens of Columbus.

Katherine Borland, associate professor of comparative studies, is the recipient of a prestigious 2018-2019 Fulbright Bicentennial Chair in American Studies award. As part of the American Studies program of the Department of World Cultures, Borland is teaching folklore and performance studies at the University of Helsinki in Finland through May 2019 to explore Finnish humanities research models that connect contemporary research with existing archival collections. Borland will also visit the folklore programs and ethnological archives at the University of Turko, Åbo Akademi, University of Jyväskylä, University of Eastern Finland and the Folklore Archive of the Finnish Literature Society in Helsinki.

Jay Hollick, professor of molecular genetics and director of the Center for Applied Plant Sciences, received a three-year, $660,000 grant from the NSF Division of Molecular and Cellular Biosciences for his research on paramutation — the DNA mechanism involved in selecting genes that will be passed to offspring — in corn. The project will identify novel molecules and chromosome structures responsible for gene selection during paramutations. Because paramutation occurs in both plants and animals, the results of this research could have broad impact, ranging from increased understanding of reproductive biology and genetics to new strategies for improving agriculture or animal health.

Richard Pogge, professor and vice chair for instrumentation at the Department of Astronomy, received a $443,150 grant from the NSF Division of Astronomical Sciences for his research on the abundance of elements in regions of partially ionized gas (called HII regions) in nearby and distant galaxies, a topic of crucial importance for understanding the chemical evolution and growth of galaxies over cosmic time. There are two primary ways of measuring chemical abundances of HII regions, and Pogge’s research seeks to resolve a decades-old discrepancy between the two methods by using the Large Binocular Telescope in Arizona, as well as a new, NSF-enabled instrument, to observe 13 spiral galaxies.

Hollie Nyseth Brehm, assistant professor of sociology, won the 2018 Ruth Shonle Cavan Young Scholar Award from the American Society of Criminology. The award recognizes outstanding contributions to the field of criminology by someone who completed their graduate degree within the last five years. Brehm received the award — the highest honor a junior scholar can receive in the discipline — for advancing knowledge on the criminology of genocide.

Lisa Voigt, professor of Spanish and Portuguese, was named a recipient of the American Council of Learned Societies 2018 Collaborative Research Fellowship, which supports small teams of scholars as they co-author a major project. With the fellowship, Voigt and her colleagues from Florida State University and Tulane University will examine texts and images of various geographies and languages from the early modern period. The resulting co-authored book will trace the spread of stereotypes across national, linguistic and confessional borders, as well as their relation to European imperial, commercial and colonial products.

Faculty members Janet Box-Steffensmeier, political science; Russell Fazio, psychology; Geoffrey Parker, history; and alumnus Carter Phillips, law, were elected to the 237th class of the American Academy of Arts and Sciences. The 228 new members include some of the world’s most accomplished scholars, scientists, writers and artists, along with civic, business and philanthropic leaders. Founded in 1780, the American Academy of Arts and Sciences is one of the country’s oldest learned societies and independent policy research centers.

James Beatty, professor of astronomy and physics, and Andrea Grottoli, professor of Earth sciences, were elected as 2017 Fellows of the American Association for the Advancement of Science (AAAS) — a prestigious honor bestowed upon AAAS members who are elected by their peers and who have made exceptional efforts to advance science. Beatty’s recognition is based on his groundbreaking work in astroparticle physics, and Grottoli’s for her leading research on coral reefs and climate change.

Zeynep Saygin, assistant professor of psychology, and Hannah Shafaat, assistant professor of chemistry and biochemistry, were named recipients of the 2018 Alfred P. Sloan Research Fellowships — a noteworthy award given annually to early-career scientists of outstanding promise from the U.S. and Canada. The two-year fellowships — each totaling $65,000 — are granted by the Alfred P. Sloan Foundation to scientists in eight fields. Saygin and Shafaat join 124 additional 2018 awardees, as well as 52 past Sloan Research Fellows from Ohio State since 1956. They are the first to be named from the university since 2015.

See more of the impactful scholarship happening in the college: go.osu.edu/asc-scholars 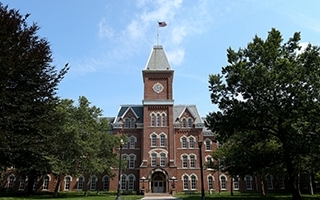