By now, most of the world has heard the news: the Higgs boson, or “God particle,” has been found — it was a long hunt.

In 1964, when theoretical physicist Peter Higgs proposed the theory of an unseen subatomic particle so fundamental that nothing, including the universe itself, could exist without it, physicists everywhere went on red alert.

Finding the Higgs, this elusive key to everything, was an irresistible quest: physicists, including Ohio State faculty and students, joined the chase.

They knew their best hope of finding it would be to build the world’s most powerful particle accelerator and bury it deep underground; in an unprecedented international collaboration, physicists worked for 18 years to build what would become the ultimate discovery machine.

Located at the European Organization for Nuclear Research (CERN), in Geneva, Switzerland the Large Hadron Collider (LHC) crashes protons into each other traveling at nearly the speed of light through its 17-mile long tunnel — creating the only conditions to “see” the Higgs. The accelerator creates the collisions, but to actually see what is happening requires particle detectors that record and visualize the explosions of particles shot through the accelerator that leave telltale signature “fingerprints.”

CERN has four detectors. Two of them, the ATLAS and CMS, focus on finding the Higgs using different approaches. Ohio State high-energy experimental physicists designed and built hardware for experiments and work on both. 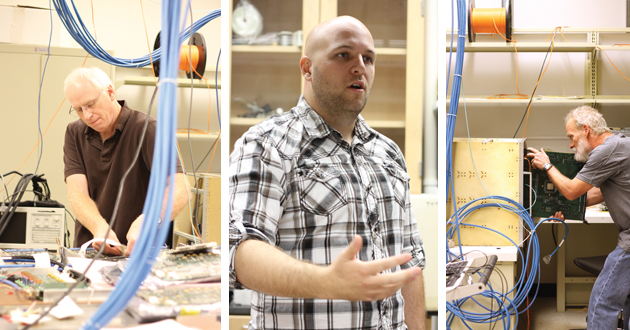 “We initiated the architecture of the CSC electronics system, developed key front-end ASICs (Application Specific Integrated Circuits), designed and tested five different types of circuit boards, and implemented all of the data acquisition firmware in the system,” Durkin said.

Kass said, “The pixel detector measures the trajectory of charged particles, including the ones that come from the decay of the Higgs. It is like a digital camera on steroids. Imagine one with about 100 million pixels that can take about a million pictures per second.”

While the hunt was relentless and the hope high, it was always a bit like chasing a chimera.

But evidence had been mounting steadily since last December. Finally, on July 4, CERN announced that a Higgs-like particle had been seen and verified by both CMS and ATLAS — at the same time. (In September the finding was confirmed by peer review.)

The discovery of the Higgs boson was the biggest news since the Big Bang.

At CERN, and in Ohio State’s labs, the work never stops, nor does the excitement and sheer wonder of that work.

Christopher Hill, CMS deputy physics coordinator overseeing all analyses on the CMS detector, made critical decisions to put the hunt into overdrive.

“In December,” Hill said, “there was finally enough data to get hints to see what was happening.

“We knew we had to make the machine more powerful to get more data. We knew if we got enough data we would have it.

“We made decisions about beam conditions that made Stan’s and everybody else’s job harder — but we did it because it was our best chance to find the Higgs. It was what everyone was working toward.”

“This was way beyond what we designed — it’s an absolute miracle it worked,” Durkin said. “A whole bunch of things had to be right.

“When we un-blinded the data, everyone said, ‘WOW’ — we knew there was enough data.”

“But we didn’t look at the data until we knew we had enough to make a determination,” Hill said.

“By the middle of June everyone was convinced. We were writing papers and press releases — and we haven’t stopped.”

“The real science was answered a few weeks earlier than the party to tell the world about it,” Durkin said. “It was a group effort; both experiments got incontrovertible evidence on the same day. Everyone walked around knowing; we’d wink but not talk.”

“I didn’t want to ‘know’ the ATLAS result. We knew what we had with CMS; we were convinced by it and it would have been shocking had their data contradicted us, but I wanted to be surprised in real time,” Hill said.

The researchers fly in and out of Geneva constantly and spend months, sometimes years, at a time at CERN.

“We live in a dorm room and eat in the cafeteria every day for a year, it was an insane amount of work — it’s very Spartan,” Durkin said.

“But you do have a good time — it’s exciting,” Hill said. “The atmosphere is quite charged.”

First-year graduate student Andrew Hart spent six weeks at CERN this summer on CMS and commented, “We all knew it was a special time. “

Advait Nagarkar, now finishing his dissertation, worked on ATLAS doing data analysis, installing hardware and maintaining service — all in all spending nearly two years at CERN. He said, “When you’re in the control room, you want to see green screens — never red; but you invent a solution for every problem that comes your way.”

“Keeping the detector running is no joke. It’s the 5 a.m. calls — something’s broken, you have to fix it,” Durkin said. “You live with it day to day — right on edge. It’s a huge system so constant failures, constant repairs; it’s nerve-wracking.”

“But I wouldn’t have changed ANYTHING,” said graduate student Hayes Merritt, who works on ATLAS and has had some of those calls himself. “It’s amazing to be 25 and be involved in an experiment like this. I’m in it for the science; I like being part of an experiment that helps further the field.”

“Most of the work is done above ground. It’s not safe to be down in the cavern; it’s radioactive and hot,” Nagarkar said. “When you do have to go down to unplug or re-plug something, you don’t linger.”

“The first time I explored the detector — I crawled around to swap out a board,” Merritt said. “Almost every inch is covered by wires, it’s like a spaceship in a sci-fi movie — cables everywhere … and so far down, you take an elevator designed to be the safe way out.”

”It’s the only place in the world where if there’s a fire, you get ON the elevator,” Durkin said.

The LHC typically shuts down in winter, so that people in the surrounding area can have heat. “The power usage is unbelievable,” Durkin said. “The CMS solenoid is a big magnet — the largest in the world. It has the energy of a 747 fully loaded with fuel going 400 mph hitting a brick wall.

“The beam has almost the same amount of energy. No one is allowed near this when it’s running. The detector is big — it’s the most complicated thing ever built by man.”

Finding the Higgs is one thing, but learning more about it is another. Everyone agrees: the work goes on.

While it’s shut down, the two teams will be busy, reworking the electronics, building new boards, doing the endless tweaks to their systems that keep them going at ever-accelerating rates. 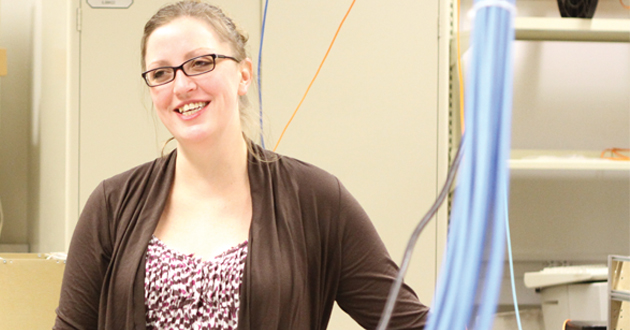 Marissa Rodenburg, taking a breath in the Durkin Physics lab before two weeks at CERN in sole charge of the CMS sub-detector.

Something I’ve noticed when I’m working out at CERN is that it feels more like a meritocracy than any other environment I’ve experienced. Young or old, male or female, hailing from whichever country, speaking whichever native languages: what matters is how well you handle your job. If you know what you’re talking about and you have something to contribute, your voice will be heard.

As a young woman, it’s an unusual experience to sit in a room full of older, better-educated, and more-experienced men and be shown that kind of respect, in any context. But I have worked hard, developed good instincts, and received a first-class education. When I’m on shift out there, I’m treated with the same respect everyone else receives. I have never been put at the proverbial “kids table” because I’m young or female. That’s one of the greatest parts of this collaboration.

When you’re in the CMS control room, doing your job, keeping your sub-detector operating at peak performance, you can’t help but geek out a little. I’m spending my days on shift maintaining and repairing this incredible machine that we are using to literally probe the frontiers of science.

Of course, most days it doesn’t feel that grandiose: you’re tired from taking emergency calls overnight, you’re bored while doing the routine maintenance, you’re frustrated because this incredibly rare error just showed up on your shift and you can’t seem to identify the cause, and (if you’re me) you’re missing the taste of hamburgers because they are so hard to find out there.

But then you have those moments, driving up to this huge detector building at the base of the Jura Mountains, watching your coworkers give tours of CMS to high school students, or sitting in the control room watching Joe Incadela announce the discovery of a new boson, when you remember what a huge privilege this is. And everyone is geeking out with you, because even if you’ve been working on this for 20 years, it’s still incredible to be a part of it.

PHYSICISTS HAVE THE COOLEST TOYS

The Large Hadron Collider (LHC) is the world’s largest, most complex scientific instrument, built by physicists from around the world; 8,000 physicists from 174 institutions in 60 countries work on the LHC — at any given time there are about 3,000 in residence. The LHC “turned on” in 2008; it crashes protons into each other traveling at nearly the speed of light through its 17-mile long circular tunnel.

In the tunnel: the world’s most powerful particle accelerator and four particle detectors, including ATLAS and CMS.

Along the tunnel: eight points, evenly spaced around the ring, exactly two miles from the next. It’s where the action is. 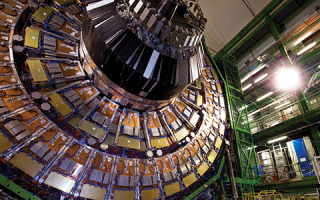