I entered my dorm room to find that me, one of the shortest people, had a roommate who was nearly three heads taller than me. Maegan played volleyball and basketball in high school, while I played tennis. We seemed like opposites in every way. She listened to R&B, I listened to punk. She came from a tiny cow town in northern Ohio, I came from a suburb-type town in Southern Ohio. She could read about public policy for hours, where as I got bored of anything that wasn't fiction. But despite these, and other, opposites, we found ourselves having personalities that coincided so well that we surprised even ourselves. I spent that first week diving face first into the first of many "I never would have expected this would happen" times.  Maegan and I are still best friends today and what used to be our "opposites" are now our balances, where we keep each other in check and fill in all the blanks.  My mother always said, "see the world, come to Ohio State", and I have definitely experienced that to the fullest.

Busy, busy, busy! Thankfully I'm not TAing this semester, but even so, research has taken up quite a bit of my time. This is also the semester where I transition into Ph.D candidacy, so it only gets busier from here! But that's what I love about Ohio State, even though you're swamped with work, there is always someone there to encourage you to keep going and really make steps to be a better scientist.

This year I decided it would be a good idea to not look at my class schedule before leaving for the first day of classes. I knew the times of my classes but I had no idea where they were located. That was fun running around Wednesday morning trying to figure out where I was supposed to be. Also, seeing the UPS man 20 times as he delivered all of my books in separate shipments was pretty fun.

My first week at OSU was absolutely awesome. I met new friends, saw so many new things, and realized that i made the best decision in my life. Before getting to school I was nervous that maybe college wasn't for me. The welcoming staff and students changed my mind in an instant. The  topping on the cake was seeing the legendary albino squirrel run across the south oval. A true sign of good luck!

My first week of college at OSU, I decided to try to explore the surrounding Columbus area and become more acquainted with what i would learn to call my home. I started by exploring the campus area and learned where all my classes would be, where i would like to study, and where to go to find all the cute girls (meeting a number of new people in the processes, of course). As i became more comfortable, my exploring moved to high street, where i found almost too many places with good I just had to try! My journey led me to Short North, finding a wide variety of unique boutiques and locally-owned shops, which gave me a great feel for the diversity that Columbus holds. As i went farther and farther, I quickly realized that I not only had reached downtown, but I also had no idea how I got there and was very lost. After wandering for two hours with no success, I eventually had to retire from my adventure and take a $20 taxi back to campus. I learned a great amount about the exciting city of Columbus and the heart of Buckeye Nation!

One day during the first week of school, I went down to the lobby in my dorm to get my mail and I saw people watching Mean Girls so I decided to joined them. I didn't know anyone in school as I was the only person from my high school. The people I met that night turned into my best friends that I still hang out with everyday and I am even dating one of them.  That one night changed my college life!

First time meeting up with my roommates face to face was an unforgettable experience. We first knew each other on Facebook. They are really nice and we get along really well! Apparently my first week at Ohio State wasn't as scary/bad as I thought it would be. I met with so many nice and welcoming people here- though I am an international student :) 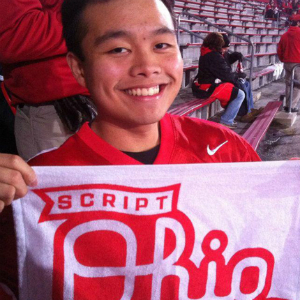 My name is Robert and I came to this country when I was only 5 years old from the Philippines.  My parents moved to this country because they wanted to give me the best opportunity to succeed.  Inspired by their hard work and sacrifices (they were able to attain amazing jobs and a United States citizenship in a little over a decade), I did my best to make them proud by utilizing my tenacity, knowledge, and stubbornness to persevere and overcome whatever challenges came my way.  As a proud of graduate of The Ohio State University, I had the privilege to receive an outstanding education and lifelong friends.  I am currently working for a state-wide political campaign.  After that, I will assume my duties as a Legislative Service Commission Fellow for the Ohio Assembly in December where I will help draft legislation and conduct research for state congress members and state senators.  For my long-term goals, I plan on attending law school.  Once that is done, I want to work for the government or a non-profit where I hope to make a positive impact on people’s lives.

My first week at Ohio State was a hectic one -- as an out-of-state student, I really had only a vague sense of what Ohio State life was going to be like, and how to get around campus. At that point in time, I was a Psychology major, waiting for the Neuroscience program to get off the ground, and went to the Psychology building for Orientation into the major.  After a ridiculous amount of walking a huge circle around the building, never QUITE seeing the building's sign, I finally walked in about 10 minutes late.  Not quite knowing where I was supposed to go, I quickly walked into a classroom that looked right, only realizing I was in the wrong room after staying there for several minutes! I was so embarrassed about it at the time, but now I think it's interesting: the orientation I "crashed" was being held by the current Neuroscience advisor, Dr. Charlie Campbell, who is now my supervisor.  What a coincidence! And a great way to see how OSU, and especially the Arts and Sciences, is more connected than one might think!

I was having a bad second day of class and was on my was to class from getting lunch. I was walking through the Oval and out of no where, some girl in a banana costume ran up to me and asked me if I wanted to pie someone in the face. The randomness of that alone brightened my day so much! Pie-ing the guy in the face made it even better!

This first week, I have attended all my classes and I only like 2 of them. I have made lots of friends, because I am living with 19 girls and 8 of them are freshmen. It is great meeting people with all different cultures. I started my foreign language GEC requirement FINALLY after waiting 3 years to get into American Sign Language. I love it. It really brings to light the struggles of the d/Deaf culture. I attended Buck-I-Frenzy and got lots of free stuff! Including Canes, Skyline, Taco Bell, and Noodles and Company. My favorite part was the coupons Kroger passed out for all kinds of free grocery products. I'm happy to be back at OSU.

Within my first week at Ohio State I tripped UP the stairs at least half a dozen times. But luckily, every time it happened, I was in front of an audience... I don't know why it happened, maybe it was my new shoes, but it was awful every time. I am now glad to say that I have kicked this habit and it hasn't happened in a while (knock on wood!). The worst time was when I was in the lower level of the RPAC and they were giving away free Cane's chicken. We waited in line forever and when I finally got my food, my roommate and I ran up the stairs with excitement. I tripped and fell in front of over 50 people... I lost my chicken strips and gained a bruise on my shin. Fun times being a freshman...

I nearly got lost because I got on the wrong CABS bus. Thankfully, I was assisted by one of the helpful drivers.

I went hot air ballooning at the Grove City balloons and tunes event. It was fun, I got to tether a balloon with pilot Bob and help passengers get in and out. Seeing all the children's faces as they went up for the first time was priceless. 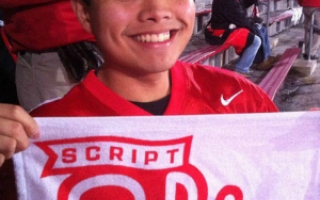