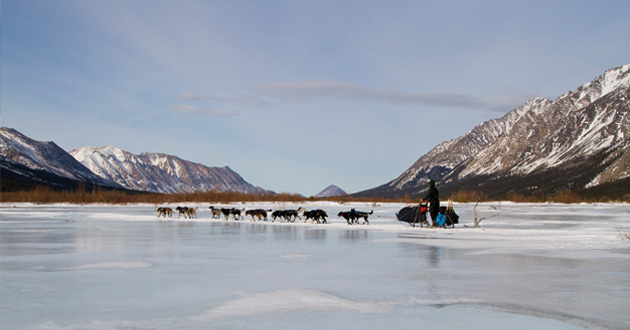 This is Alaska: Failor and team leave the Rohn Check Point, Egypt Mountain in the distance.

"Dog sledding is such a part of Alaskan history and culture, like football is a part of Ohio State and the Midwest. It is a way of life." {Matthew Failor}

MATTHEW FAILOR (BFA, Art, 2007) embarked on his second Iditarod this year. When asked how an art major from Mansfield, Ohio, ended up training and racing sled dogs in Alaska, he jokingly said, “by airplane.”

Failor was attending Ohio State when he heard about summer employment opportunities with the Alaskan tourism industry. His first trip to Alaska was in 2006 to work as a dog handler— with no experience.

“I just kept coming back. I enjoy the scenery and lifestyle, and love working with the dogs."

“Before last year’s Iditarod,” Failor explained, “the plan was one and done, but that changed the moment I crossed the finish line. I built a bond with the dogs that can’t be explained; it can’t be torn.”

A typical day on the trail, if everything goes as planned, consists of a run/rest schedule. The dogs are trained to run 40 or 80 miles without stopping for extended periods of time. They run about 10 miles per hour for four to eight hours. When the team stops, Failor puts down straw, feeds the dogs, gives them massages, and checks to make sure they are healthy and able to continue. 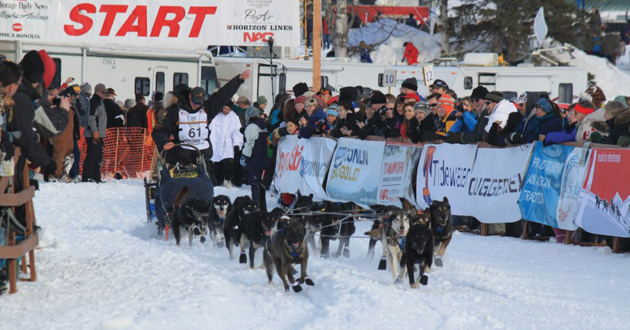 And, they’re off! Excited, the Happy Trails Kennel B team begins the 2013 race.

The musher eats and sleeps last. His main focus is to keep his dogs happy and healthy. “We coexist together; unhappy dogs won’t run.”

The biggest surprise to Failor has been the outpouring of support from Ohio. As a good luck charm, he carried a buckeye in his sled during both races. “Ohio doesn’t leave me,” he said.

When asked what he misses about Ohio State and Columbus, Failor said, “I miss all of my friends, walking down the Oval, the Wexner Center, Catfish Biff’s, Adriatico’s, the camaraderie of being on campus, yelling O-H and always getting an I-O in response, and knowing any time of day somewhere, some basketball pick-up game is going on.”

Failor races for Happy Trails Kennel, owned by four-time Iditarod champion Martin Buser. He finished the 2013 Iditarod in 28th place, after starting 59th. His future plans? He hopes to start a kennel in Alaska and see where this adventure takes him.

His family runs an active Facebook page to keep friends and fans from Ohio and beyond updated on his progress on the trail.

The Iditarod is called “The Last Great Race.”

More people have climbed Mount Everest than have completed the Iditarod.

1,049 miles long, the Iditarod runs from Anchorage to Nome.

The race was started to save Alaskan
sled dog culture and preserve the historical Iditarod Trail.

The Iditarod takes place every March.

The race lasts from nine to 12 days, but is not considered over until the last musher crosses the finish line.