More than 300 students on campus are, well, just a little older than their classmates. Ranging in age from 60 to nearly 90, they keep up just fine, taking classes from physics to painting, history to hip-hop to … you name it, thanks to Ohio State’s tuition-free Program 60, established in the 1970s by the Ohio Legislature, now coordinated through Ohio State’s Office of Distance Education and eLearning.

“Program 60 lets any Ohio resident age 60 and older take just about any course at the university, provided there is space available and the professor has given permission,” explained Julie Maurer, program coordinator. “Some people have been taking classes for 20 years!”

Most people take one class at a time, but some take several, including one woman in her late 60s, Nancy Morcos, who took three dance classes last semester.

Program 60 participants don’t just sit back and observe; they’re fully integrated in the classroom. “I get amazing feedback from the instructors who absolutely love having them in their classes,” Maurer said. “They connect with the other students and build relationships.” 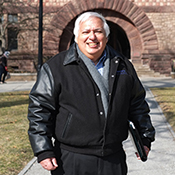 Mitch Alvarado had never heard of Program 60 until his neighbor suggested they take a drive down to campus.

“I had just retired and I wasn’t sure what I wanted to do,” said Alvarado. “My neighbor, who also is retired, stopped over one day and said ‘Hey, let’s go back to school.’”

That was five years ago. “It gives me purpose,” said Alvarado. “I’m learning.”

Since retiring from U.S. Bank, where he served as vice president of the plastics division for more than 17 years, Alvarado had been averaging four classes a quarter; then, with the semester switch, five classes a semester, ranging from human nutrition to advanced behavioral neuroscience. And, the history of rock ‘n’ roll.

“I love it, I absolutely love it. I look forward to learning something new every single day.” 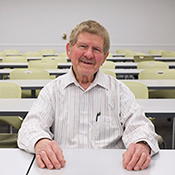 At 87, Joseph Funfar, father of four daughters, with six grandchildren, may be the oldest student enrolled. Funfar earned a bachelor’s degree in education, and a master’s degree in information science from the University of Pittsburgh and a PhD in sociology from St. Louis University.

“Being able to interact with students at this stage of my life, it’s good for my mental health. Education is an ongoing process and should continue through your life.”

Funfar has participated since 2004. He was enrolled in continuing education classes at the University of Pittsburgh before he moved to Columbus 12 years ago.

Over the years, Funfar has taken classes in psychology, sociology, political science, biology and a geography course on modern geo-political imagination. 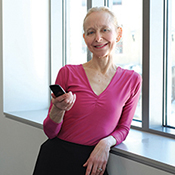 “Program 60 is one of the best-kept secrets in Columbus. I went with a friend to a dance class and got hooked. I am addicted now! I’ve been taking classes for eight years and I’m going strong.”

Morcos, 68, was a special education teacher in Columbus City Schools for 27 years. The Ohio State alumna had earned a master’s degree in English and lectured at the university before that. When she was younger, she had danced with the Dayton Ballet, Cincinnati Opera Ballet, BalletMet Dance Ensemble, Fasting-Farquhar Ballet and other local groups. 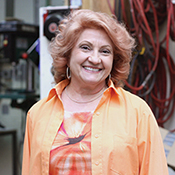 Native Texan Eve Nordyke, who says she’s 65 and three-quarters, retired from an information technology company, relocated to
Ohio and found a new calling as an avid Buckeye with a passion for the theatre.

She said she’s gotten nothing but encouragement and support from fellow students and instructors. “No one’s ever had the attitude — what’s this old lady doing in our class?

“It’s absolutely wonderful to be around 20-year-olds — they’re so full of energy and enthusiasm.” 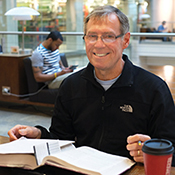 First up: economics, “because I was perplexed by what happened to our economy in 2008.”

“When the instructor began drawing mathematical models, I realized it had been a long time since I had a math course!”

“Challenging would be an understatement. This has been tough, but I keep thinking it’s just like solving puzzles.

“I love the experience of walking into a classroom, learning new things and seeing the world in a different way, just like any other student.”