History Begins with How

Educated at Christ’s College, Cambridge, under the tutelage of noted historian John Elliott, Parker learned a very useful skill, how to “read” history.

“He taught me to gut massive amounts of materials really quickly and distinguish what is truly significant.”

An expert on Spanish and military history of the early modern era, Parker’s books are meticulously researched, by necessity long and real page-turners. Just try to resist the allure of King Philip II, Spain’s most famous monarch, exercising executive power from age 16, leader of the world’s first “superpower” from 1556 to 1598, builder of El Escorial (now a UNESCO World Heritage site), the architect of the Spanish Armada and the subject of Parker’s latest biography, published last November.

In 2011, Parker finally finished a book that had taken him out of what he calls his comfort zone, sent him around the world and occupied nearly a decade of his life, Global Crisis: War, Climate Change and Catastrophe In the Seventeenth Century.

Almost immediately, a startling discovery sent him back to familiar territory: a forgotten cache of 3,000 unidentified documents at the Hispanic Society in New York City. Acquired at the turn of the 20th century by Archer M. Huntington, the society’s founder, they were placed in Huntington’s private vault and only entered the Hispanic Society collection itself after Huntington’s death in 1955.

For Parker, who describes himself as a “how-to” guy, the “how” is always the starting point. “You can’t ask why until you know how,” he said.

He has been asking it — to great effect — for a long time. Parker, who grew up in Britain shortly after WWII, learned early that war and larger-than-life figures, good and evil, help shape the world. The legacy of the Luftwaffe was everywhere.

“From the age of 5 or 6, I was aware of bombed-out land all around me — acres and acres of desolation. It had a profound influence on me, and I wanted to know how it happened. Adolf Hitler had a way of getting your attention — even after he was dead.”

There they sat untouched until an archivist, who was not sure of their provenance, brought them to Parker’s attention.

“I soon identified many important letters, notes and administrative documents, many written by Philip himself, along with two sets of long letters of advice on ‘how to be a king’ (one for Philip’s eyes only) written by his father, Charles V. No one had seen them for more than 400 years.

“It made me realize the role that serendipity has played in my life as an historian.”

For the next six months, Parker and two former graduate students, powered by an Andrew W. Mellon Foundation grant and scholarly fervor, sorted and catalogued these lost pieces of the past. “Some of the documents changed the way I had seen individual problems, re-interpreted certain events, or shed new light on complex issues.”

In other words, what he had found called for a new book, and Imprudent King: A New Life of Philip II was born.

By the way, the book that took him out of his comfort zone, Global Crisis, won attention, accolades, awards and the 2014 British Academy Medal for “a landmark academic achievement … which has transformed understanding of a particular subject.”

Parker’s work draws parallels between then and now that make it clear that history has lessons to teach — and more than ever, we need to learn them.

Geoffrey Parker is not only a consummate scholar, he is a dedicated educator and mentor, shaping the minds and winning the hearts of thousands of students, both graduate and undergraduate, during more than 45 years in the classroom. In 2006, he was recognized for his outstanding teaching with an Ohio State Alumni Distinguished Teaching Award.

What does a great historian read when he isn't reading history?

It should not be a surprise. Geoffrey Parker, whose prize-winning book, Global Crisis: War, Climate Change and Catastrophe in the Seventeenth Century, chronicles a harrowing time of world-wide chaos reportedly reducing world population by a third, is reading The Narrow Road to the Deep North by critically acclaimed Australian novelist Richard Flanagan. The 2014 Man Booker Prize winning-novel is about a group of Australian POWs, who were among 300,000 Allied prisoners Imperial Japan brutalized into building the Thailand-Burma Death Railways in the early 1940s — something the British had dismissed as impossible to do. The Japanese made it possible by using their captured Allied soldiers as disposable labor, costing the lives of more than 12,000 prisoners. 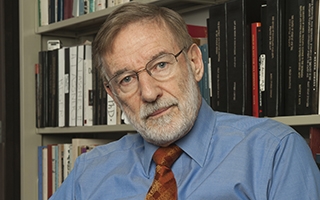