“The big-school environment gave me the skills and the opportunities to succeed. Ohio State taught me that hard work pays off and you can do anything you want.”

“Winning an Emmy was pretty surreal and exciting. If you had asked way back when if I thought I would be at the Emmy Awards, I would have thought you were crazy,” said KATIE LUCAS.

Lucas, who graduated in 2008 with a degree in English literature and minors in communication and business, works at HBO as an associate editor for digital content.

Lucas got her start with internships in Columbus with the local CBS radio station, the local NBC affiliate, PromoWest Productions and Brighter Minds Media.

After graduating, she was accepted into the page program at NBC where she worked for Saturday Night Live and Late Night with Jimmy Fallon. She worked for The Dr. Oz Show for three years writing web content and started her own blog where writers review fictional characters on TV shows. The success of her blog, Character Grades, helped Lucas land her job at HBO.

Last November, Lucas had the opportunity to meet with a group of arts scholars and media marketing and communications scholars who traveled to New York City. Lucas was one of 10 alumni with whom the students connected during their trip. She gave them advice and shared her story of success with them.

Lucas credits much of her success to these internships. She encourages students interested in the entertainment field to be confident and aggressive and stresses the importance of networking. 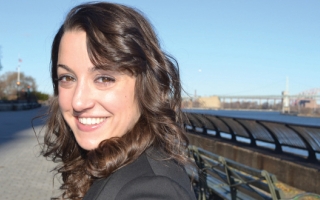